There is a growing need for high-skill workers in the American workplace, and this has helped to narrow gender disparities in the labor market, a new Pew Research Center report finds. Increasingly, U.S. employers are in pursuit of workers who are adept in social skills, like negotiation and persuasion, and who have a strong grounding in fundamental skills, such as critical thinking and writing. Jobs attaching greater importance to analytical skills, such as science and mathematics, are also adding workers at a brisk pace. Women have been in the forefront of meeting these challenges, and this has been to their benefit.

The American workplace has seen a rising need for high-skill workers in recent decades. This report examines the impact of the changing landscape for job skills on gender disparities in the U.S. labor market.

The analysis is based on job skills and preparation data from the U.S. Department of Labor’s Occupational Information Network (O*NET), specifically Version 23, released August 2018, and Version 5.1, released November 2003. O*NET analysts rate the importance of 35 skills related to job performance in individual occupations. For the purposes of this analysis, we grouped these into five major families of job skills: social, fundamental, analytical, managerial and mechanical. Occupations were then assigned to one of four skill tiers based on the importance rating of each of the five major skills, ranging from least important to most important.

Examples of occupations in which each of the five skills is most important, or is in greatest need, in 2018 are as follows: social skills – sales managers; fundamental skills – lawyers; analytical skills – physicists; managerial skills – chief executives; and mechanical skills – industrial machinery mechanics. Occupational employment and wage data are from the Current Population Survey (CPS). For more information about the analysis, see the methodology section of this report.

1Women are in the majority in jobs that draw most heavily on either social or fundamental skills. In 2018, women made up 52% of employment in jobs in which either social or fundamental skills are most important – such as legal, teaching and counseling occupations (up from roughly 40% in 1980). Women also greatly raised their share of employment in occupations in which analytical skills are of greatest importance – such as accounting and dentistry – from 27% in 1980 to 42% in 2018. The increase in the share of women in these high-skill occupations was much greater than the increase in their share of employment overall, from 43% in 1980 to 47% in 2018. 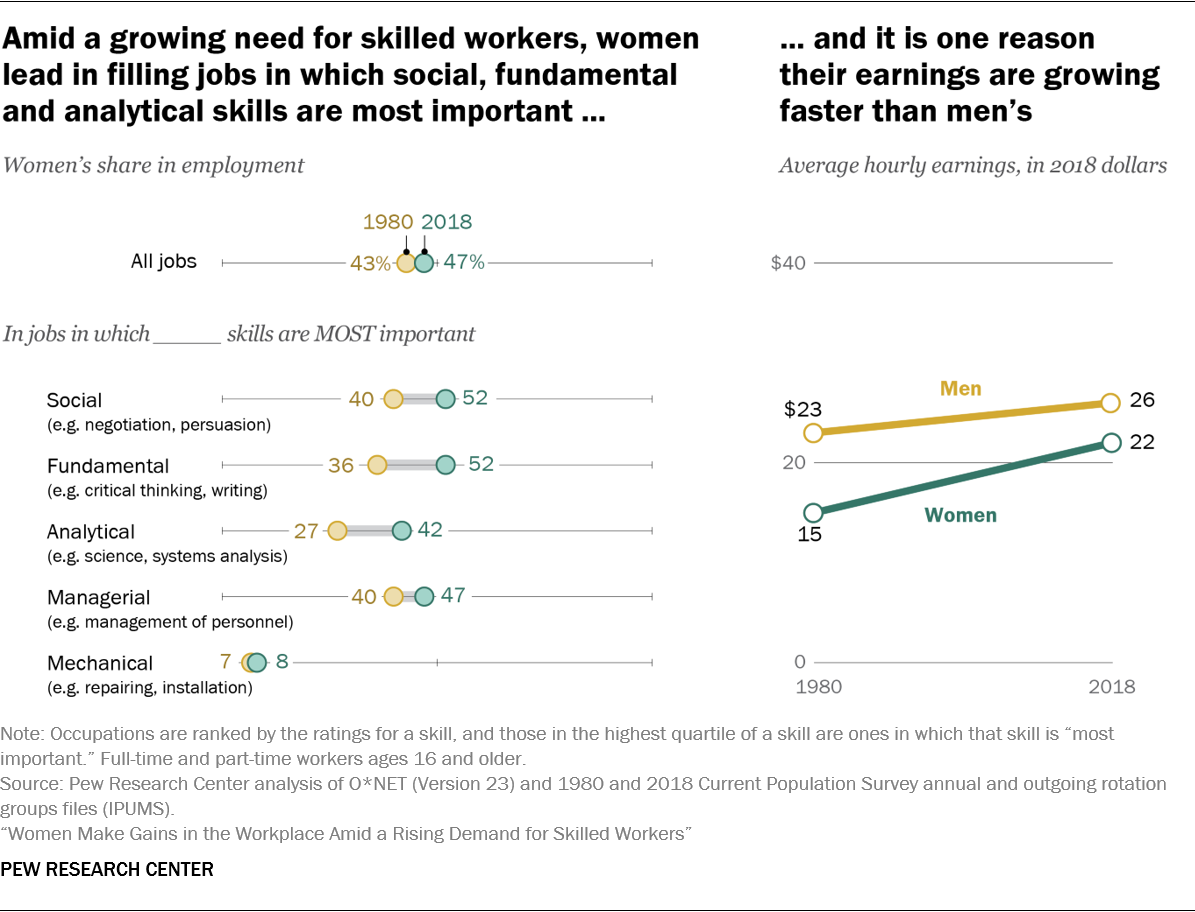 2The growing presence of women in higher-skill occupations helped to narrow the gender wage gap. As women surged into higher-skill occupations in recent decades, they experienced more rapid wage growth than men. A rising level of education among women was also a contributing factor. From 1980 to 2018, the average hourly wage of women increased 45%, from $15 to $22, compared with an increase of 14% for men, from $23 to $26 (wages expressed in 2018 dollars). Thus, the earnings of women as a ratio of the earnings of men increased from 0.67 to 0.85, a narrowing of the gender wage gap from 33 cents to the dollar in 1980 to 15 cents to the dollar in 2018.

3Despite women’s advantages in skills and education, the gender wage gap persists and is ubiquitous. Regardless of the classification of occupations – by skill type or the importance of a skill – women’s earnings fell short of men’s earnings in 2018. For example, women in occupations with the greatest need for analytical skills earned $33 per hour, 88% as much as the men who earned $38 per hour in similar jobs. Women in occupations with the least need for analytical skills earned 82% as much as men in the same jobs.

The wage gap persists even though women currently hold an edge over men in certain skills and in schooling. In 2018, women constituted the majority in jobs in which fundamental and social skills are more important. Also, 40% of women had completed at least a four-year college program, compared with 35% of men. The analysis in this report estimates that women’s lead in skills and education helped to narrow the gender wage gap by 4 cents to the dollar. But the ongoing presence of a gender wage gap is attributable to a variety of other factors, some measurable (such as hours worked, industry and occupation) and others more difficult to pinpoint (such as discrimination by race, gender or other characteristics and differences in professional networks).

4Gender differences in skills are rooted in gender differences in occupations. The skills that women and men deploy at the workplace are influenced by the specific occupations they gravitate to, whether by choice or due to cultural norms and other constraints. Some 61% of women were engaged in administrative support, health care, sales-related, managerial and education-related occupations in 2018 – all jobs more in need of social, fundamental and managerial skills. In contrast, 34% of men were employed in the following lines of work: production, installation and repair; construction, extraction and farming; and transportation and related. These occupations are more in need of mechanical skills. 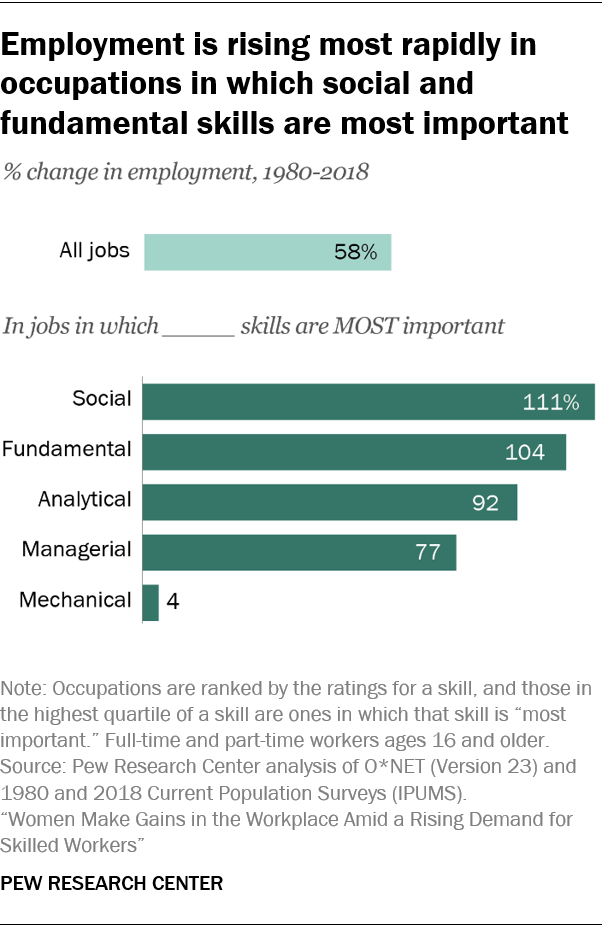 5Employment is rising more rapidly in jobs in which social and fundamental skills are most important. From 1980 to 2018, overall employment more than doubled in jobs where social and fundamental skills are most important, by 111% and 104%, respectively. (Examples of such jobs are social workers, lawyers and obstetricians.) Employment in jobs most in need of analytical skills, such as computer programmers, increased nearly as sharply (92%), compared with an increase of 58% in employment overall. Meanwhile, there was virtually no change in employment in jobs relying most on mechanical skills (only 4%). That is at least in part due to globalization and  technological change, which have sharply reduced job opportunities in the manufacturing sector and the need for mechanical skills.

6Wages are higher and rising faster in jobs that rely heavily on social, fundamental, analytical and managerial skills. 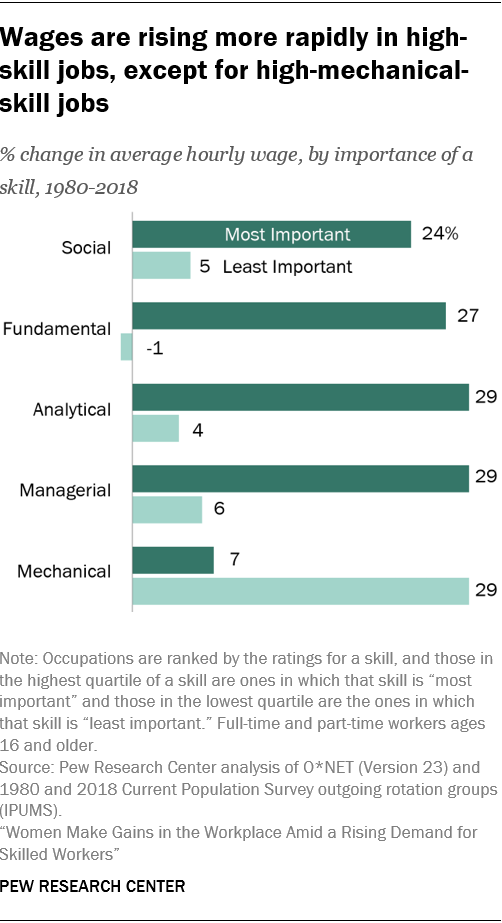 Overall, both rising employment and wages in higher-skill jobs affirm the growing demand for workers more adept in social, fundamental, managerial and analytical skills. Wages vary little by mechanical skills, ranging from $22 to $25 in 2018 depending on the importance of mechanical skills.