As is true with many other forms of digital technology, use of these devices varies substantially by socioeconomic factors. Around three-in-ten Americans living in households earning $75,000 or more a year (31%) say they wear a smart watch or fitness tracker on a regular basis, compared with 12% of those whose annual household income falls below $30,000. Differences by education follow a similar pattern, with college graduates adopting these devices at higher rates than those who have a high school education or less, according to the survey of 4,272 U.S. adults.

A fitness tracker can compile a variety of data about the wearer’s activities, depending on the complexity of the device. Users can monitor this data with a corresponding app, where they can manually input additional information about themselves and their lifestyle. As a result, the makers of fitness trackers amass a wealth of data on their users that can be used in many ways. Current privacy policies for many fitness tracking apps allow users’ data to be shared with others. Some researchers are already using data from these apps for health research.

For this report we surveyed 4,272 U.S. adults in June 2019. Everyone who took part is a member of Pew Research Center’s American Trends Panel (ATP), an online survey panel that is recruited through national, random sampling of residential addresses. Recruiting our panelists by phone or mail ensures that nearly all U.S. adults have a chance of selection. This gives us confidence that any sample can represent the whole population (see our Methods 101 explainer on random sampling).

Recently, some concerns have been raised over who can and should have access to this health data. Military analysts have also expressed concern about how third parties can use the data to find out where there is an American military presence. 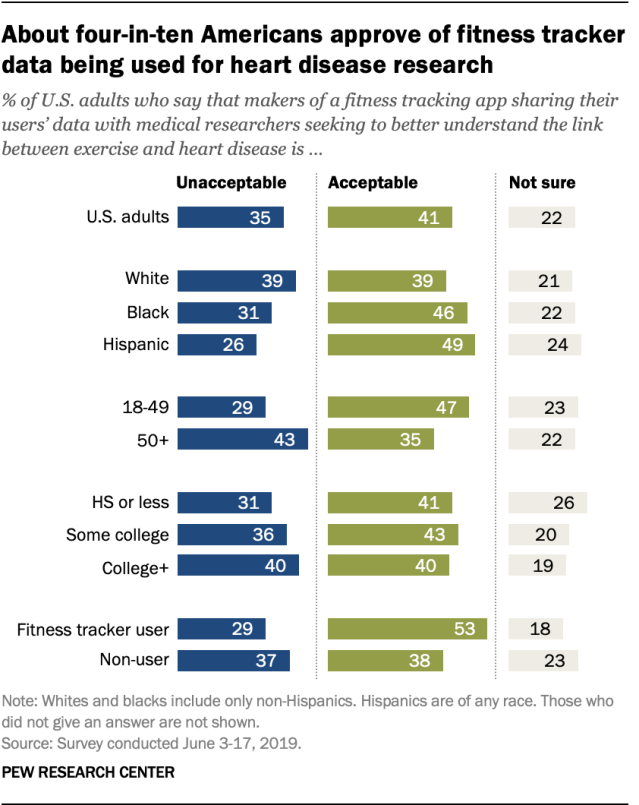 In the Center’s survey, there’s no clear consensus among the public as to whether sharing this information with medical researchers is acceptable or not. About four-in-ten Americans (41%) say it is acceptable for makers of fitness trackers to share users’ data with medical researchers seeking to better understand the link between exercise and heart disease, while a somewhat smaller share (35%) believes this is an unacceptable practice. Another 22% are unsure if this is an acceptable practice or not.

Some groups find the use of this data more acceptable than others. White adults (39%) are more likely than those who are black (31%) or Hispanic (26%) to see sharing this data as unacceptable. At the same time, 47% of adults under the age of 50 believe that sharing this type of data with researchers is acceptable, compared with 35% of those 50 and older.