Argentines are headed to the polls for their general election on Oct. 27. They will cast their votes against a backdrop of wide discontent with the way things are going in the country and little faith in their elected officials and public institutions, according to a Pew Research Center survey.

The election comes as the nation’s economy tries to recover from an August financial crisis. The peso lost over 30% of its value and the main stock market dropped 38% immediately following incumbent President Mauricio Macri’s second-place finish during the Aug. 11 primaries.

The August financial shock is the latest of a long series of crises that have plagued Argentina’s economy. According to a 2018 report by the World Bank, the nation has experienced 14 financial crises since 1950, not including this latest recession.

Here are five findings about the public mood in Argentina as the election approaches: 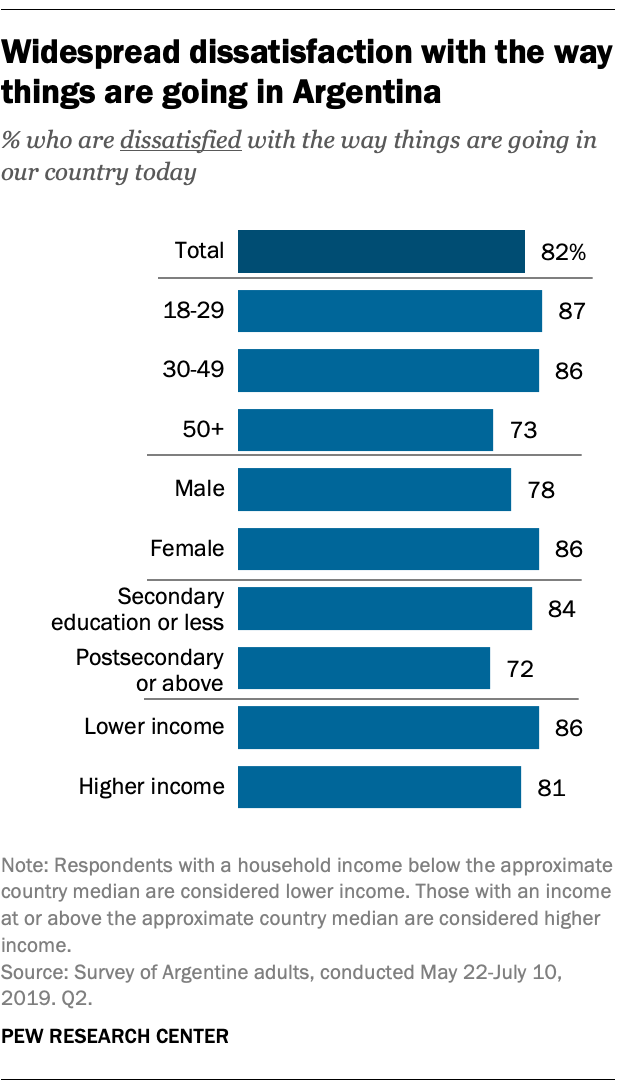 There is widespread pessimism among the Argentine public about the nation’s direction. About eight-in-ten (82%) express dissatisfaction with the way things are going in Argentina today. Younger Argentines (ages 18 to 29) are significantly more likely than those 50 and older (87% vs. 73%) to say they’re dissatisfied with conditions in the country. Similarly, women are more likely than men to hold this view (86% vs. 78%). 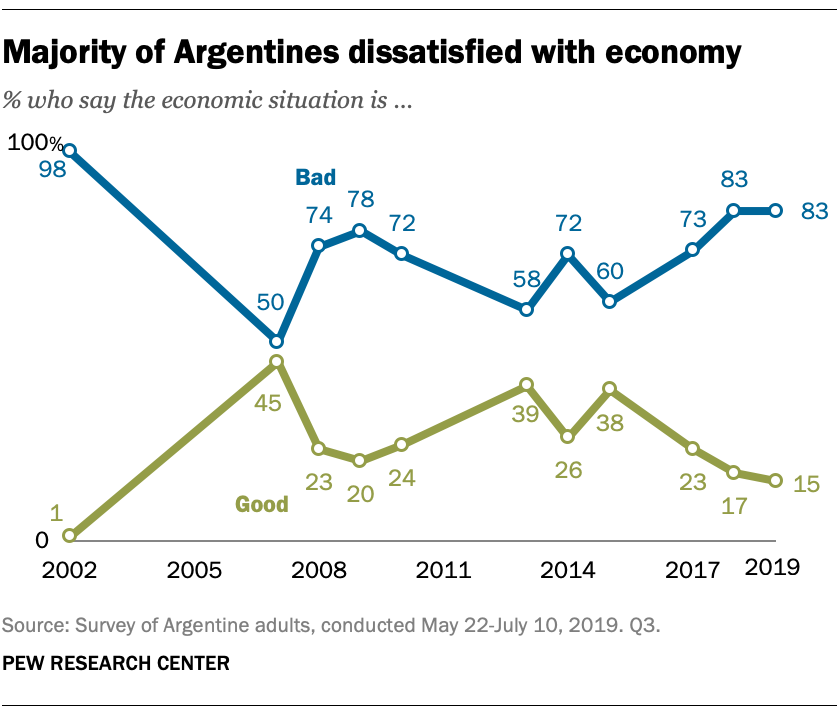 When it comes to the financial future of children in Argentina, the public is split – 42% believe their children will be better off than their parents, while 47% say they’ll be worse off. 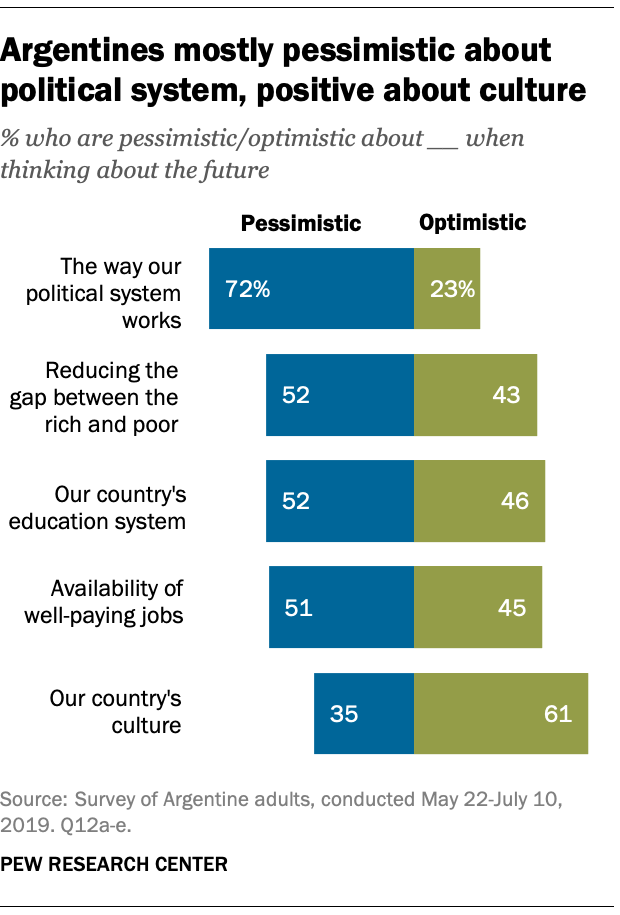 Discontentment among Argentines extends across a wide range of conditions in the country. Overall, 72% of Argentines say they are pessimistic with how the political system works when thinking about the future. Those with a favorable view of the ruling party are less likely to feel pessimistic about the way their political system works than those with an unfavorable view (58% vs. 78%), though majorities of both are still pessimistic.

Roughly half of the Argentine public reports feeling pessimistic about the possibility of reducing the gap between the rich and poor (52%), the nation’s education system (52%) and the availability of well-paying jobs (51%).

On a positive note, a majority of Argentines express optimism about their country’s culture when looking ahead (61%). 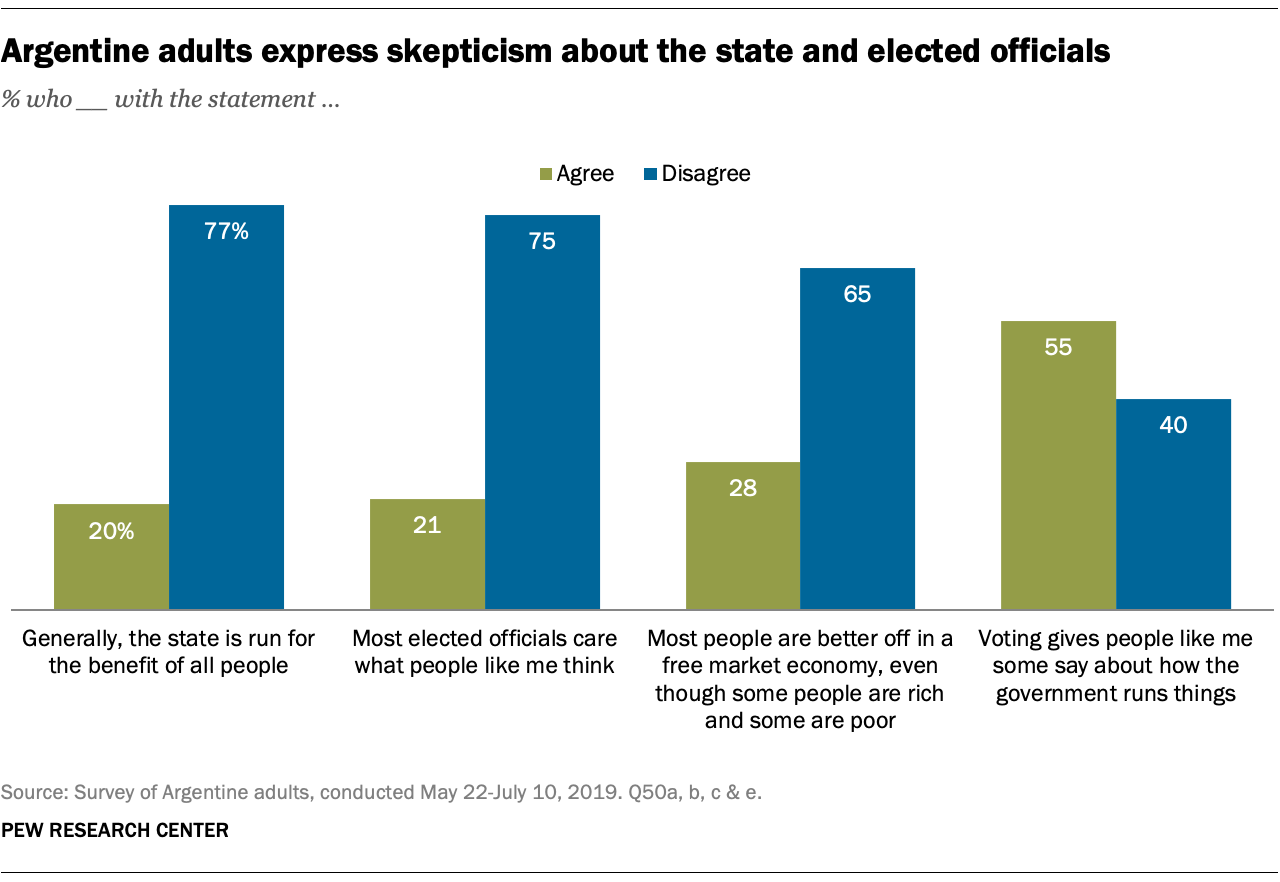 Despite the dissatisfaction with aspects of the political system, Argentines are optimistic about democratic participation – 55% say that voting gives people like themselves some say in how the government runs things. 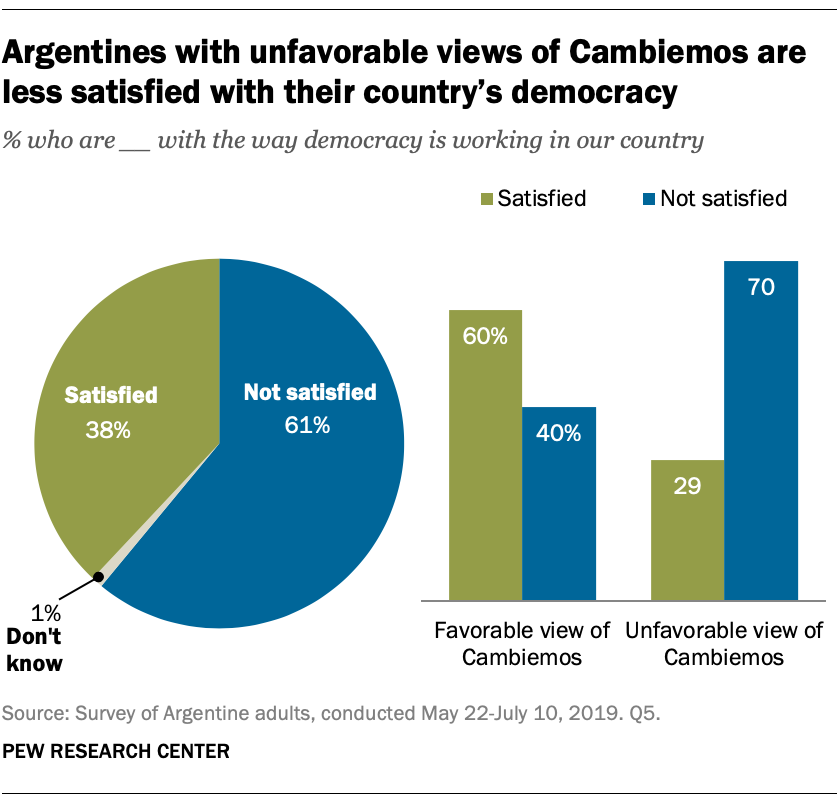 A majority of the Argentine public is dissatisfied with the state of their democracy. About six-in-ten (61%) express dissatisfied views, which fits the trend exhibited in recent years.

There are differences by political views. The only group with a majority that expresses satisfaction with the way democracy functions are those who have a favorable view of the ruling party. Majorities of those with favorable views of Kirchnerismo and Peronismo express dissatisfaction with democracy’s functioning (68% and 60%, respectively).