The European Union is viewed favorably across much of the world, according to a new Pew Research Center survey.

Central and Eastern Europeans tend to express the most enthusiasm toward the EU: Across six countries in the region, positive ratings outweigh negative ones by more than three-to-one (a median of 74% vs. a median of 23%).

People in Poland (84%) and Lithuania (83%) are especially positive, giving the two highest ratings for the EU of all countries included in the study. Enthusiasm is more tempered in the Czech Republic, though 52% of Czechs still rate the EU favorably.

Western Europeans largely see the Brussels-based institution positively. Across the eight Western European nations surveyed, a median of 62% give the EU favorable marks.

While still generally positive, sizable shares in France (47%), the UK (44%) and Greece (44%) hold unfavorable views of the EU. In fact, people in these three nations are as negative or more negative toward the EU than people in Russia, where 44% have an unfavorable view.

Outside of Europe itself, the most positive views of the union are in South Korea and the Philippines, where 80% and 70% of adults, respectively, have a favorable view. Majorities in Japan (60%) and Australia (58%) also look favorably on the EU, though the share with a positive opinion is lower in Indonesia (45%, with another 33% offering no opinion).

In Turkey, which has been in accession talks with the EU and its predecessor organization since 1987, just 34% have a favorable view. A majority of Turks (56%) hold an unfavorable view, the highest share among all countries surveyed. Turkish adults expressed this opinion after the European Parliament took a nonbinding vote to freeze Turkey’s membership talks in March of this year, but prior to EU members suspending arms exports to Turkey in the wake of Turkish military actions in Syria. The survey was conducted before Turkey’s recent incursion into northern Syria.

In the Middle East more broadly, at least half of publics in Lebanon, Israel and Tunisia view the EU favorably. Though most Israelis see the EU in a positive light, a sizable minority (43%) rate the institution unfavorably. And while Israeli Jews are split in their views (47% favorable and 47% unfavorable), Israeli Arabs show much more positivity (66% favorable vs. 26% unfavorable).

Views of the EU are, on balance, positive in Nigeria, Kenya and South Africa, where four-in-ten or more rate the institution favorably. Roughly one-in-five or more in each of the African nations surveyed, however, decline to give an opinion.

How people in North America, Latin America see the EU

Across the Atlantic Ocean, 69% of Canadians report positive views of the EU. Americans offer a more tempered assessment, with 51% expressing approval. However, a larger share of Americans than Canadians give no opinion (21% vs. 8%, respectively). 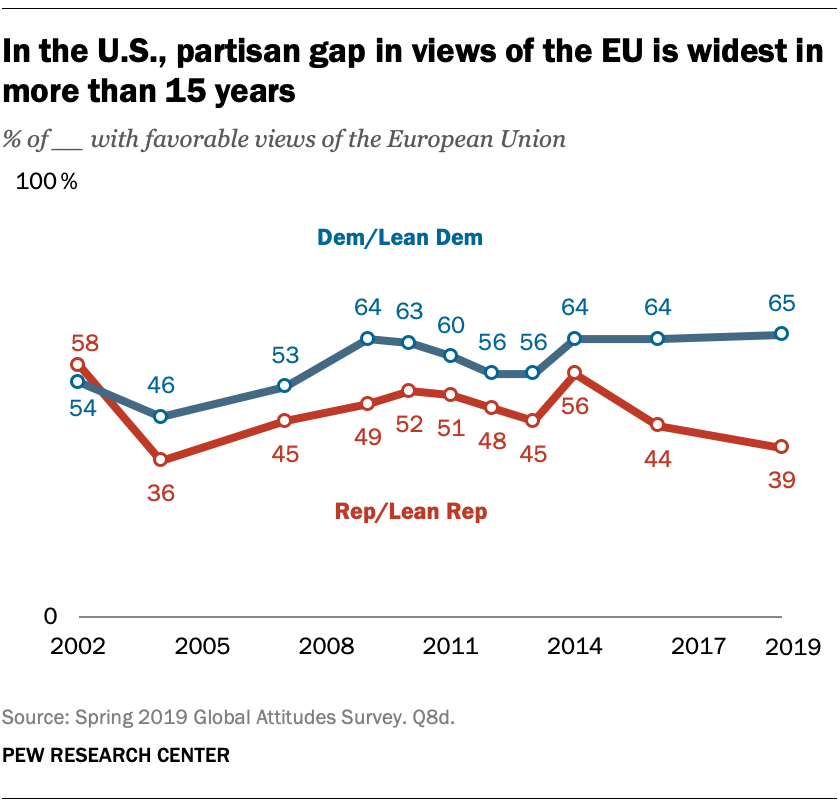 In the three Latin American nations surveyed – Argentina, Brazil and Mexico – positive views of the EU win out over the negative by about two-to-one. However, roughly a third in each country offer no opinion, higher than the share giving a negative review in each country.

How attitudes toward the EU have changed since 2013 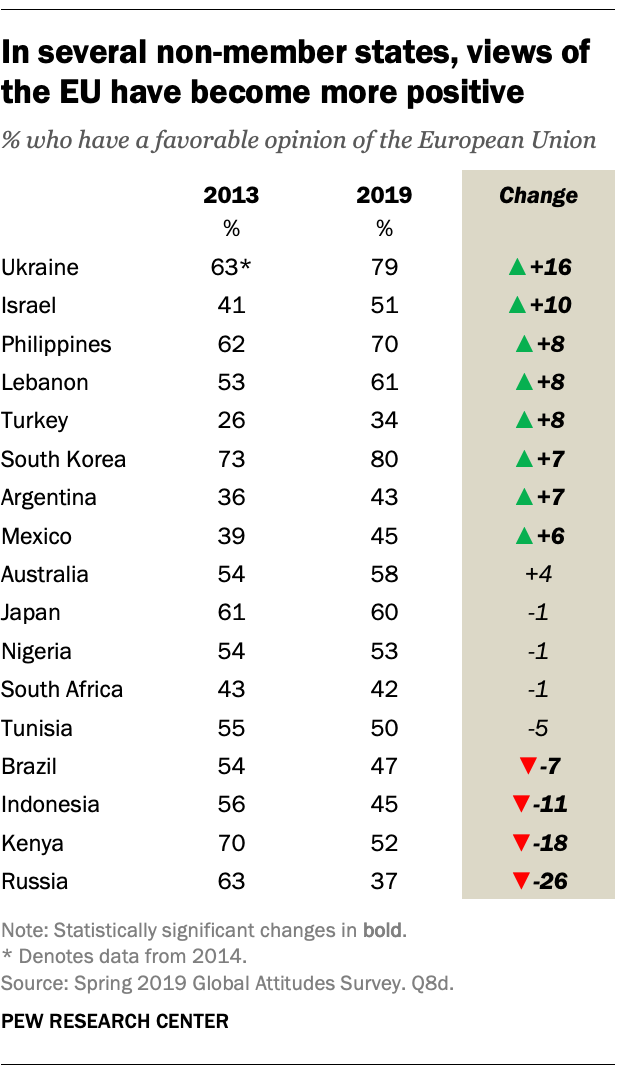 In many countries outside the European Union, views of the EU have become more favorable in recent years. The share of people with a positive view has significantly increased since 2013 in Ukraine, Israel, the Philippines, Lebanon, Turkey, South Korea, Argentina and Mexico. (The difference in Ukraine may be, in part, a result of changes in sampling after the Russian invasion of eastern Ukraine. For example, Crimea was surveyed in 2014, but was omitted from sampling in 2019 due to security concerns.)

Views of the EU have become more negative in some countries over the same period. Brazil, Indonesia and Kenya have seen significant decreases in favorable views of the EU since 2013, but this appears to be the result of more people declining to offer any opinion about the EU, rather than increasing negative views. 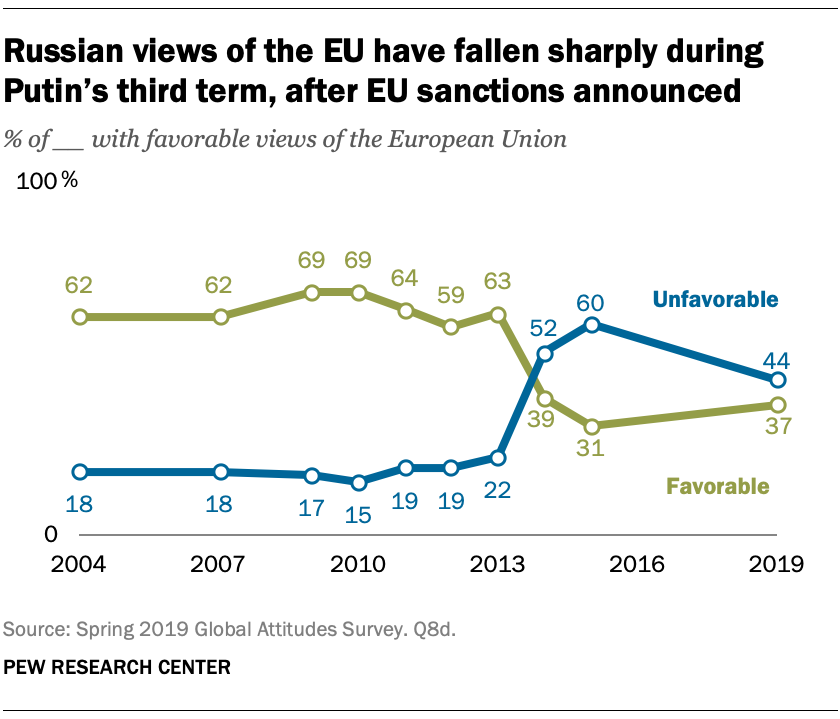 From 2004 to 2013, roughly six-in-ten or more Russians held positive views of the EU. However, attitudes changed dramatically after 2013, with about half of Russians expressing an unfavorable view in 2014. Negative attitudes have persisted through Russian President Vladimir Putin’s third term, the Russian annexation of Crimea and subsequent EU sanctions on Russia in response to that military incursion.

Young people around the globe have more positive views of the EU. In 26 of 33 surveyed nations, those ages 18 to 29 have more favorable attitudes toward the EU than those ages 50 and older, including in 15 countries that are not EU members. Outside of Europe, these age differences are especially stark in countries like Brazil and Indonesia, where younger adults are 28 percentage points more likely than older adults to see the EU favorably.

However, in many countries with statistically significant differences by age, those ages 50 and older are more likely to offer no opinion regarding the EU. In Brazil, for instance, 62% of younger adults have a favorable view while 34% of older adults feel the same. But 41% of older Brazilians do not give an opinion about the EU, compared with just 19% of younger Brazilians.

In 12 countries, those on the ideological left have more positive assessments than those on the right. This is especially true in the UK (38-point left-right difference), the U.S. (35 points) and Israel (33 points).

5 key findings about how Europeans view the economy and EU
5 charts on global views of China
United Nations gets mostly positive marks from people around the world
People around the globe are divided in their opinions of China
How people around the world see the U.S. and Donald Trump in 10 charts
Election night marks the end of one phase of campaign 2020 – and the start of another
The Trump-Biden presidential contest
The Changing Racial and Ethnic Composition of the U.S. Electorate
An examination of the 2016 electorate, based on validated voters
Democrats’ advantage over Republicans among Florida registered voters has shrunk since 2016