As the 2020 U.S. census approaches, Americans overwhelmingly are aware of it, and more than eight-in-ten (84%) say they definitely or probably will participate, a new Pew Research Center survey finds. Still, 16% express at least some uncertainty about responding, with higher shares saying this among some demographic groups.

Black and Hispanic adults, as well as those with lower income levels, are more likely to say they probably or definitely will not participate in the census, or that they might or might not. Black and Hispanic adults have been undercounted in the past, while lower-income adults are classified as a “hard to count” population, according to Census Bureau research.

Age is also an important predictor of whether people say they may participate, even after controlling for other factors. Young adults – those ages 18 to 29 – are least likely to be on board of the four age groups included in this analysis.

There is no notable difference between Democrats and Republicans (including those who lean toward each party) when it comes to awareness of the census and intention to participate.

The 2020 census will begin in remote parts of Alaska in January, but most U.S. households will receive mailings in March asking them to participate. In addition to the basic population count, the form asks for each person’s age, sex, Hispanic origin, race and relationship to the resident in their household who fills out the questionnaire. Census numbers are used to allocate seats in the House of Representatives among the states, redistrict political boundaries within states, guide the distribution of billions of dollars in federal funds and support public, nonprofit and commercial research.

Americans have had high awareness of the census at least as far back as late 2018. In a comparable survey in November 2018, 95% of adults said they had heard of the U.S. census.

In Pew Research Center surveys conducted before and during the 2010 census, 92% of Americans said they were aware of the census in early January that year, and 94% were aware of it in mid-March. As census-related advertising and news coverage grew, the share who reported hearing something recently rose from 44% in January to 79% in March. By March 2010, roughly nine-in-ten Americans (87%) said they definitely or probably would fill out their forms (or already had), a 6 percentage point increase from that January. However, the Center’s 2010 surveys were conducted via telephone (landline and cellphone), and due to the difference in modes, results may not be directly comparable to those of the 2019 survey conducted online.

Majority have heard something about the census lately 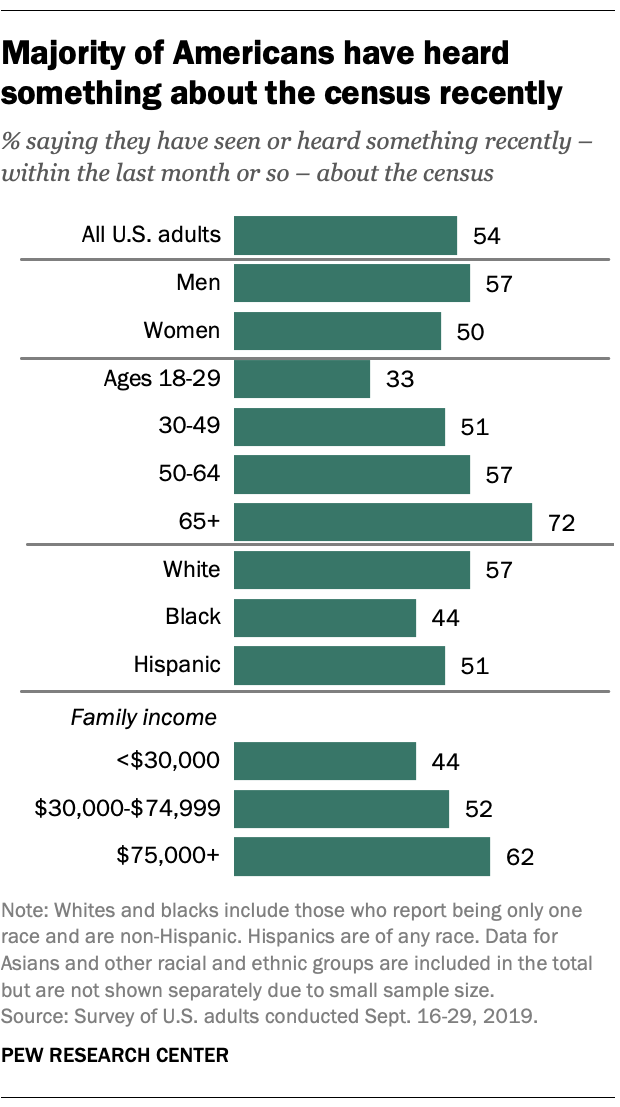 The new survey finds wide awareness about the census across all demographic groups. A majority of U.S. adults (54%) say they have heard something recently – within the last month or so – about the census. Adults younger than 30 are least likely to have heard something recently, while those ages 65 and older are more than twice as likely to say the same. Men are more likely than women to say so, as are whites when compared with black and Hispanic adults.

There are also differences by Americans’ education and income. Those with a bachelor’s degree or higher or incomes over $75,000 are more likely to have heard something recently about the census. (See additional tables for more information.)

The 2020 census was prominently in the news in July, when President Donald Trump dropped his idea to add a question about citizenship to the form following a Supreme Court ruling against the plan. When proposed in March 2018, the government said the question was needed to enforce civil rights laws, but opponents who filed suit to block it said it would discourage immigrants and others from responding. With the question off the form, the government instead is collecting citizenship information from its own administrative records, and plans to publish these numbers in 2021.

Census Bureau Director Stephen Dillingham said at a congressional hearing in July that publicity over the citizenship question may have increased awareness of the 2020 census.

More than nine-in-ten say census is important to U.S. 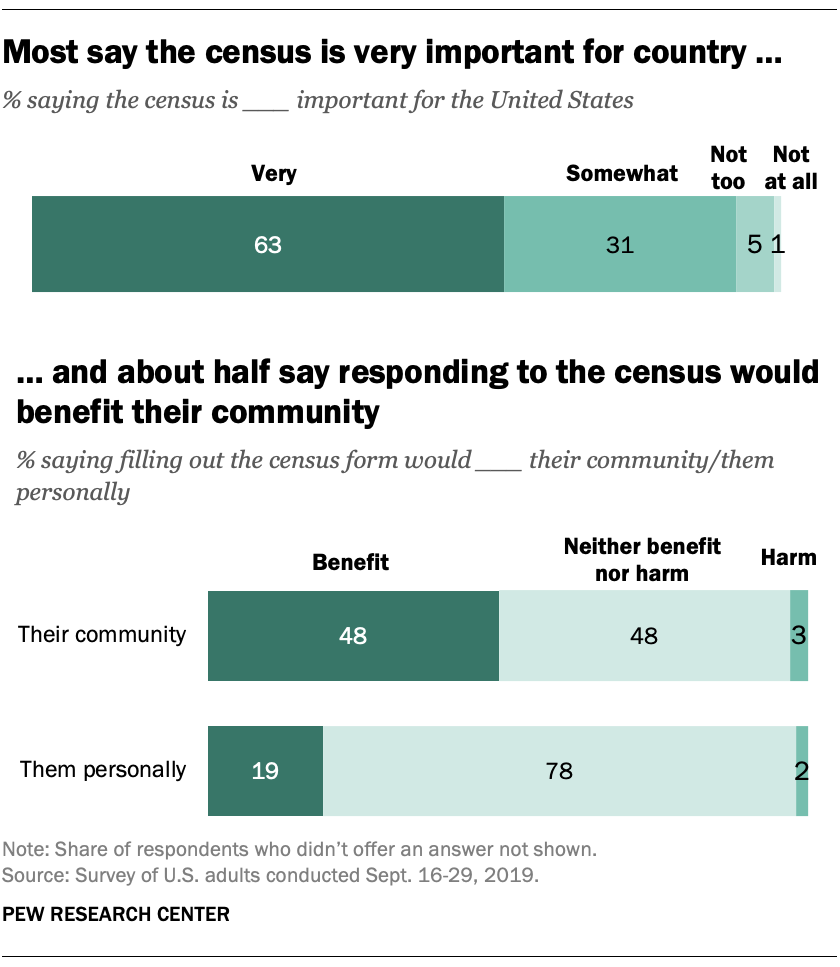 Among adults in the new survey, there is near-universal (94%) belief that the census is very important (63%) or somewhat important (31%) for the United States.

There is no difference between Democrats and Republicans (including people who lean toward each party) on whether the census is important for the U.S. However, Democrats are a little more likely than Republicans to say that responding to the census will benefit them or their community.

The shares of adults who believe participating in the census would benefit their community or them personally are somewhat lower than in the Pew Research Center telephone survey conducted in March 2010. In that survey, 62% said participation would benefit their community (compared with 48% who say so in the current survey) and 33% said it would personally benefit them (versus 19% in the current survey).

Adults who are black or Hispanic, those who are younger and those with lower income levels are less convinced of the importance of the census and its benefits for their community.

In general, adults who are white and older or have higher income levels are most likely to say they intend to participate and that the census is important for the nation.

Even though more than eight-in-ten U.S. adults say they plan to participate in the 2020 census, Census Bureau research has found that the actual census response rate is lower than the share of adults who say they intend to participate. The lower the self-response rate, the more the Census Bureau spends on sending employees to knock on the doors of nonresponding households, and the responses could be less accurate.