What comes to mind when people think of research scientists?

Studies have explored the idea that stereotypes of scientists – like the less-than-warm image of men in white lab coats – could undermine public trust in them or result in deterring diverse groups from pursuing education and jobs in science. 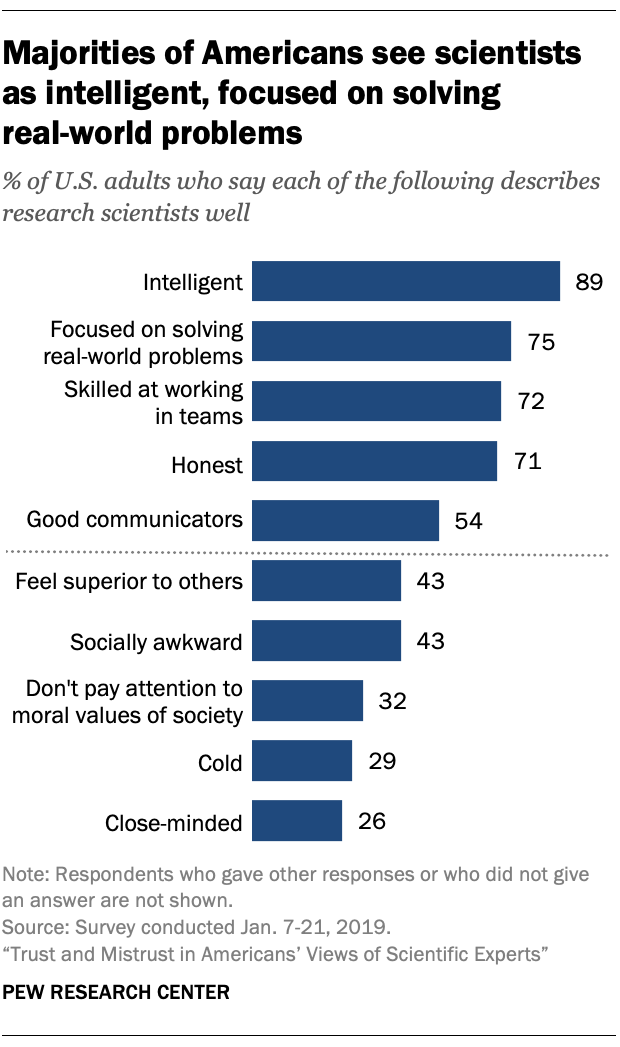 A Pew Research Center survey presented Americans with a list of five desirable and five not-so-desirable qualities and asked whether each describes research scientists well. We found that large majorities see an array of positive qualities in scientists.

About nine-in-ten (89%) of those surveyed think of research scientists as intelligent. Three-quarters (75%) see scientists as focused on solving real-world problems. Similar shares say they consider scientists to be skilled at working in teams (72%) or honest (71%).

Scientists fared less well when Americans were asked if they considered them to be good communicators – a smaller majority (54%) described them this way.

Less than half the public considers each of five potential negative characteristics to fit their image of research scientists. The most common of these are “feel superior to others” and “socially awkward” (43% each say these describe research scientists well).

And four-in-ten Republicans say research scientists “don’t pay attention to the moral values of society,” compared with 26% of Democrats.

How much people know about science also tends to color their image of research scientists. Those with high levels of factual knowledge about science, based on an 11-item index, are more likely than those with low science knowledge to say scientists exemplify four of the five positive qualities considered.

Note: See topline results for full question wording and the Methodology section of the main report for more information on the index of science knowledge.