On balance, people around the world are more accepting of refugees fleeing violence and war than they are of immigrants moving to their country, according to a new analysis of public opinion data from 18 nations surveyed by Pew Research Center in spring 2018.

The analysis comes as many countries grapple with a surge in refugees and migration amid the ongoing civil war in Syria and other armed conflicts in the Middle East. There were 258 million people living outside their country of birth in 2017 including roughly 20 million refugees, according to the United Nations.

In Japan, on the other hand, 81% supported more or about the same number of immigrants moving to their country, while a smaller share (66%) supported taking in refugees. Despite reaching its highest-ever foreign national population of 2.7 million in 2018, Japan’s population is shrinking. Only China is expected to lose more people by the year 2100, according to recent UN population projections.

In a separate Pew Research Center survey conducted in spring 2018, 51% of Americans said the U.S. “has a responsibility to accept refugees into the country,” while 43% said it does not.

Attitudes toward refugees, immigrants are related to views of diversity 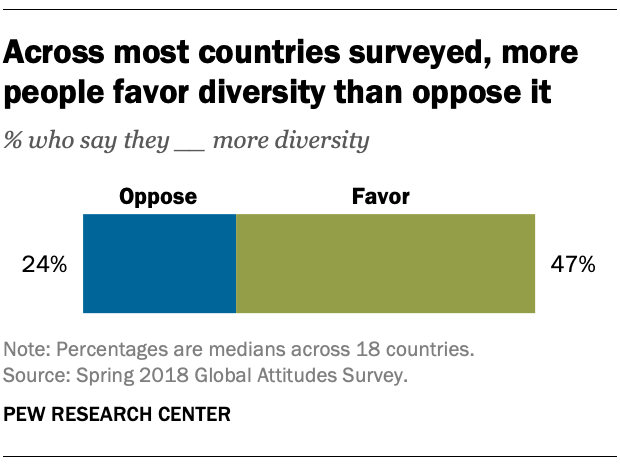 Globally, public attitudes toward accepting refugees and immigrants often differ depending on whether respondents see diversity as beneficial for their country (for more on how we measure attitudes toward diversity, see our April 2019 report). Overall, people in 14 of 18 countries surveyed were more likely to favor diversity than oppose it. 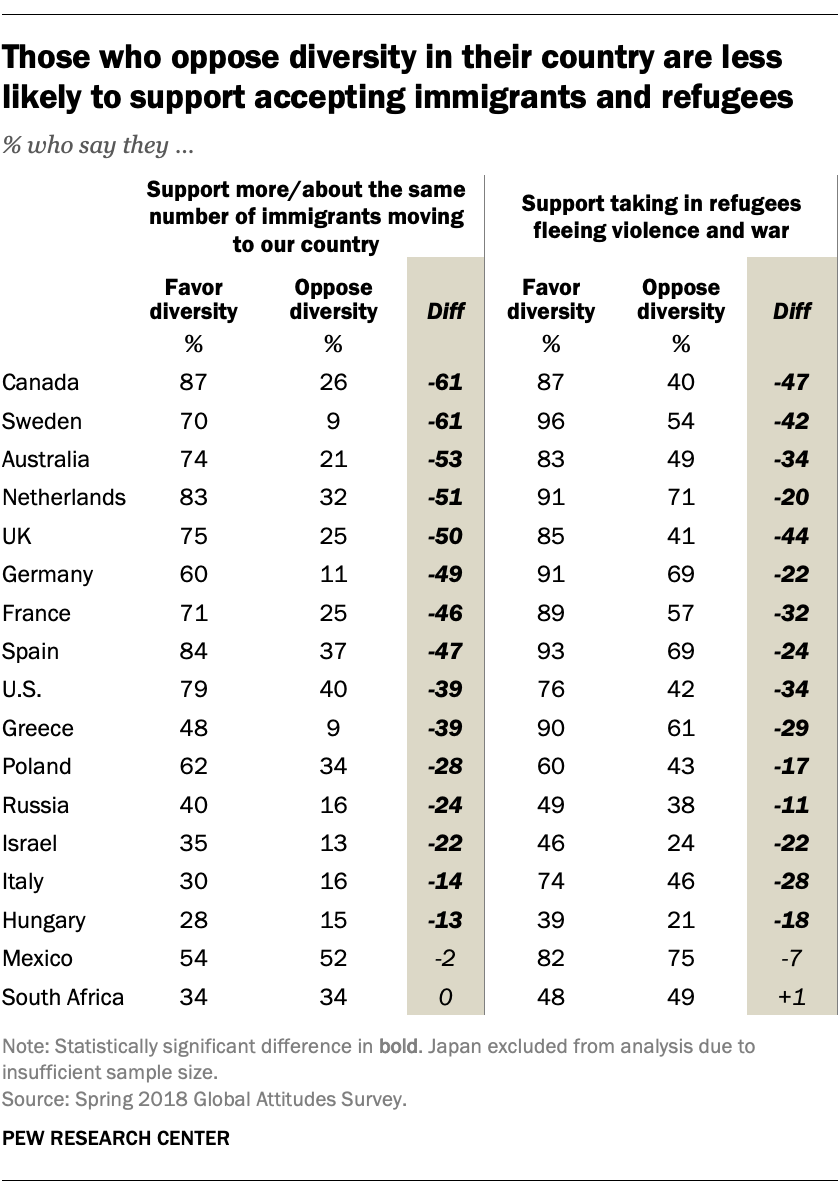 This pattern held true in 15 of the 17 countries surveyed (Japan was excluded from analysis due to insufficient sample size.) However, in South Africa and Mexico, there were almost no differences between those who oppose and favor diversity.

In general, people who oppose diversity are also more likely to see immigrants as a burden on society. For example, in Sweden, 67% of those who oppose diversity said immigrants today are a burden on their country “because they take our jobs and social benefits,” compared with 13% of Swedes who favor diversity. These gaps were also wide in Canada (52-point difference between those who oppose and favor diversity), Australia (50-point difference) and the U.S. (33 points).

In most of the countries surveyed, those who oppose diversity were also more likely to say immigrants want to be distinct from their country’s society. In addition, they were less likely to support encouraging highly skilled people to immigrate and work in their nation.

A majority of Europeans favor taking in refugees, but most disapprove of EU’s handling of the issue
Fast facts on how Greeks see migrants as Greece-Turkey border crisis deepens
Immigrant share in U.S. nears record high but remains below that of many other countries
Key facts about the world’s refugees
For World Refugee Day, 5 long-term refugee trends