Americans believe trust has declined in their country, whether it involves their fellow citizens’ faith in each other or their confidence in the federal government, according to a wide-ranging new Pew Research Center survey. And adults ages 18 to 29 stand out for their comparatively low levels of trust in a number of these areas.

Around three-quarters (73%) of U.S. adults under 30 believe people “just look out for themselves” most of the time. A similar share (71%) say most people “would try to take advantage of you if they got a chance,” and six-in-ten say most people “can’t be trusted.” Across all three of these questions, adults under 30 are significantly more likely than their older counterparts to take a pessimistic view of their fellow Americans.

All told, nearly half of young adults (46%) are what the Center’s report defines as “low trusters” – people who, compared with other Americans, are more likely to see others as selfish, exploitative and untrustworthy, rather than helpful, fair and trustworthy. Older Americans are less likely to be low trusters. For example, just 19% of adults ages 65 and older fall into this category, according to the survey, which was conducted in late 2018 among 10,618 U.S. adults. (You can read more here about how the study grouped Americans into low, medium and high trust categories.)

Young adults also express less confidence in their fellow citizens to act in certain civically minded ways. Only around a third of young Americans (35%) say they have a great deal or fair amount of confidence in the American people to respect the rights of those who are not like them – about half the share of adults 65 and older who say this (67%).

Low interpersonal trust is associated with less confidence in institutions, the study found, and this pattern is evident among young adults.

While trust in the military is high across age groups, Americans under 30 are substantially less likely than their elders to express a great deal or fair amount of confidence in the armed forces. Around seven-in-ten young adults (69%) are confident in the military, compared with 81% of those ages 30 to 49, 90% of those 50 to 64 and 92% of those 65 and older. 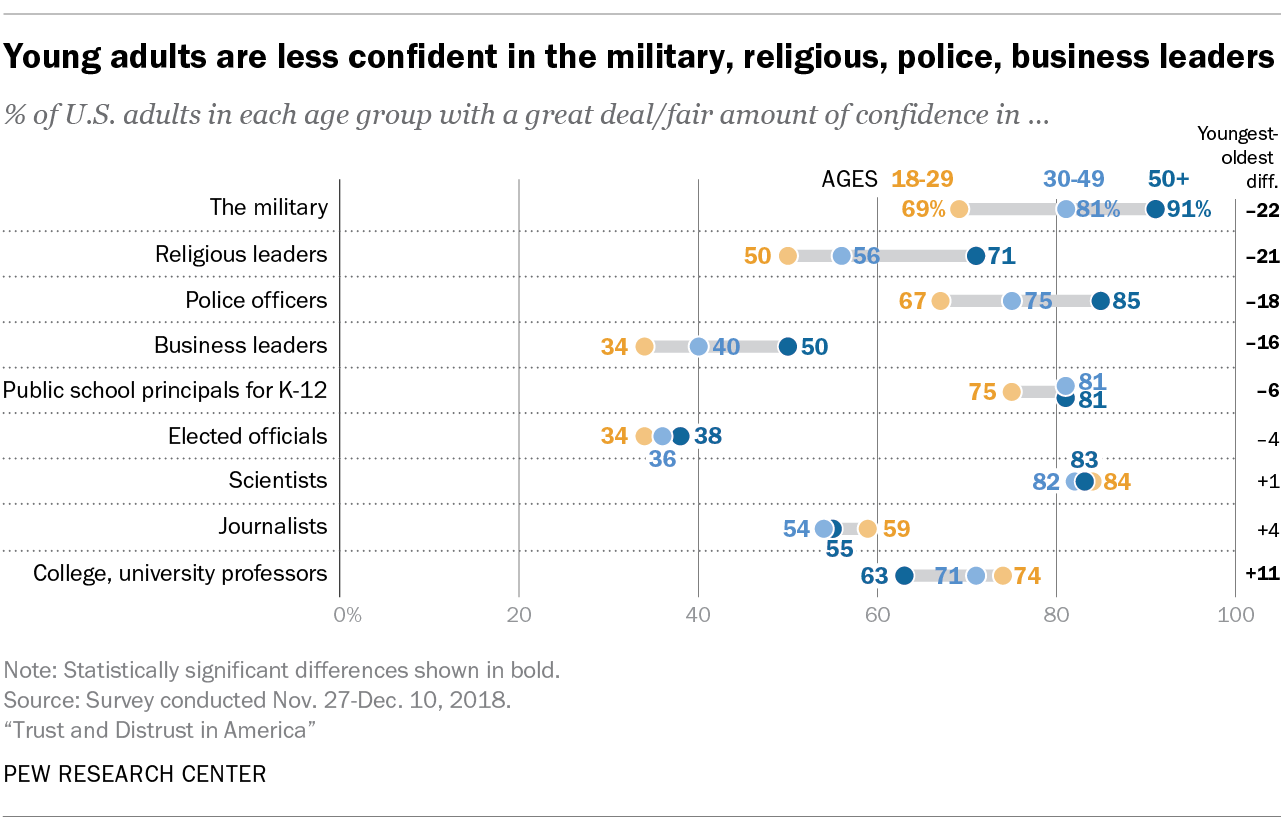 Young Americans are also less likely than older adults to say they have a great deal or fair amount of confidence in religious leaders, police officers, business leaders and K-12 public school principals.

But this isn’t the case across the board. Young adults are slightly more likely than people 50 and older to say they have a great deal or fair amount of confidence in college and university professors, for example.

Despite their comparatively skeptical outlook on many questions, young Americans are less likely than their older counterparts to see certain trust-related issues as major problems for the country. Adults under 30 are less likely than those in older age groups to say Americans’ confidence level in the federal government is a very big problem. They are also less likely to perceive as very big problems the ability of Democrats and Republicans to work together in Washington, the role of lobbyists and special interest groups, the financial stability of Social Security and Medicare, and the condition of roads, bridges and public transportation.

The issue of why trust patterns vary by age is a contentious one. The common thought is that changes in interpersonal trust over time are largely a cohort or generational phenomenon. Still, other research published this year asserts that people’s interpersonal trust increases as they age. Social and institutional trust patterns can be complicated, as the Center’s new report shows, and there is reason to believe that young adults’ views and behaviors might change as they get older – and as the world around them changes.