Despite ongoing debates over science-related issues, Americans have broadly positive views of scientists and their work, according to a new Pew Research Center survey. But Americans are more tepid when it comes to trusting scientists’ competence, credibility and concern for the public interest – and they are largely skeptical of scientists’ transparency and accountability.

Here are five key findings about public trust in scientists, drawn from the new survey: 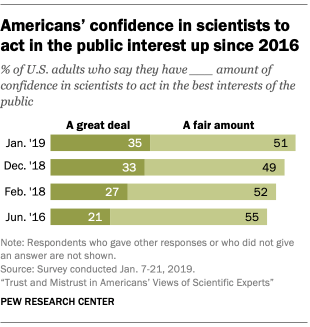 3Majorities trust medical doctors and dietitians to care about their patients’ best interests, but trust in other scientists is lower. Respondents were asked whether scientists in each of the six specialties could be trusted to act with competence, to present their recommendations or research findings accurately, and to care about people’s best interests. Americans tend to trust practitioners in medicine and nutrition – who directly interact with patients – more than researchers in these areas. For example, a majority of Americans (57%) say medical doctors care about patients’ best interests all or most of the time, while far fewer (35%) say medical researchers always or usually care about the public’s interests. And 60% say dietitians care about their patients’ best interests all of most of the time, compared with 29% who say nutrition research scientists care about the public interest with the same frequency. But trust in environmental health specialists – practitioners who offer recommendations to organizations and community groups – is about the same as that for environmental researchers. 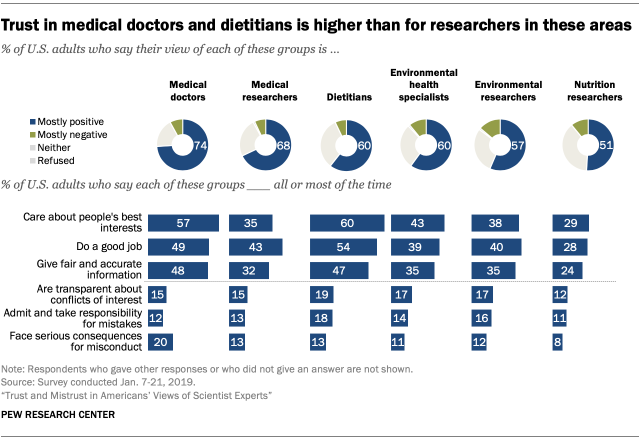 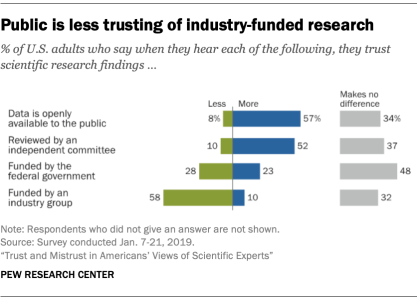