Four years ago, technology companies were widely seen as having a positive impact on the United States. But the share of Americans who hold this view has tumbled 21 percentage points since then, from 71% to 50%.

Negative views of technology companies’ impact on the country have nearly doubled during this period, from 17% to 33%, according to a new Pew Research Center survey. Nearly one-in-five (18%) now volunteer their impact has been neither positive nor negative or that it is mixed, or they offer no opinion.

The survey, which asks about the impact of seven major institutions and groups – including banks, universities, the news media and religious organizations – finds that no more than about half of U.S. adults say any of them are having a positive effect on the country.

There are substantial partisan differences in these views, but the gap between Democrats and Republicans is relatively modest when it comes to technology companies: Democrats and Democratic-leaning independents are 10 percentage points more likely than Republicans and GOP leaners to say these firms have a positive effect on the way things are going in the country (54% vs. 44%). Since 2015, there have been similar declines in positive views among members of both parties.

Recent Pew Research Center surveys have found that the public has a number of criticisms of technology and social media companies. Last year, a majority of Americans (55%) said tech companies have too much power and influence, while 72% said it was likely that social media sites intentionally censor political viewpoints they find objectionable. A survey earlier this year found that the public generally believes social media companies have a responsibility to remove offensive content from their platforms but that Americans have little confidence in the companies when it comes to determining what’s offensive. 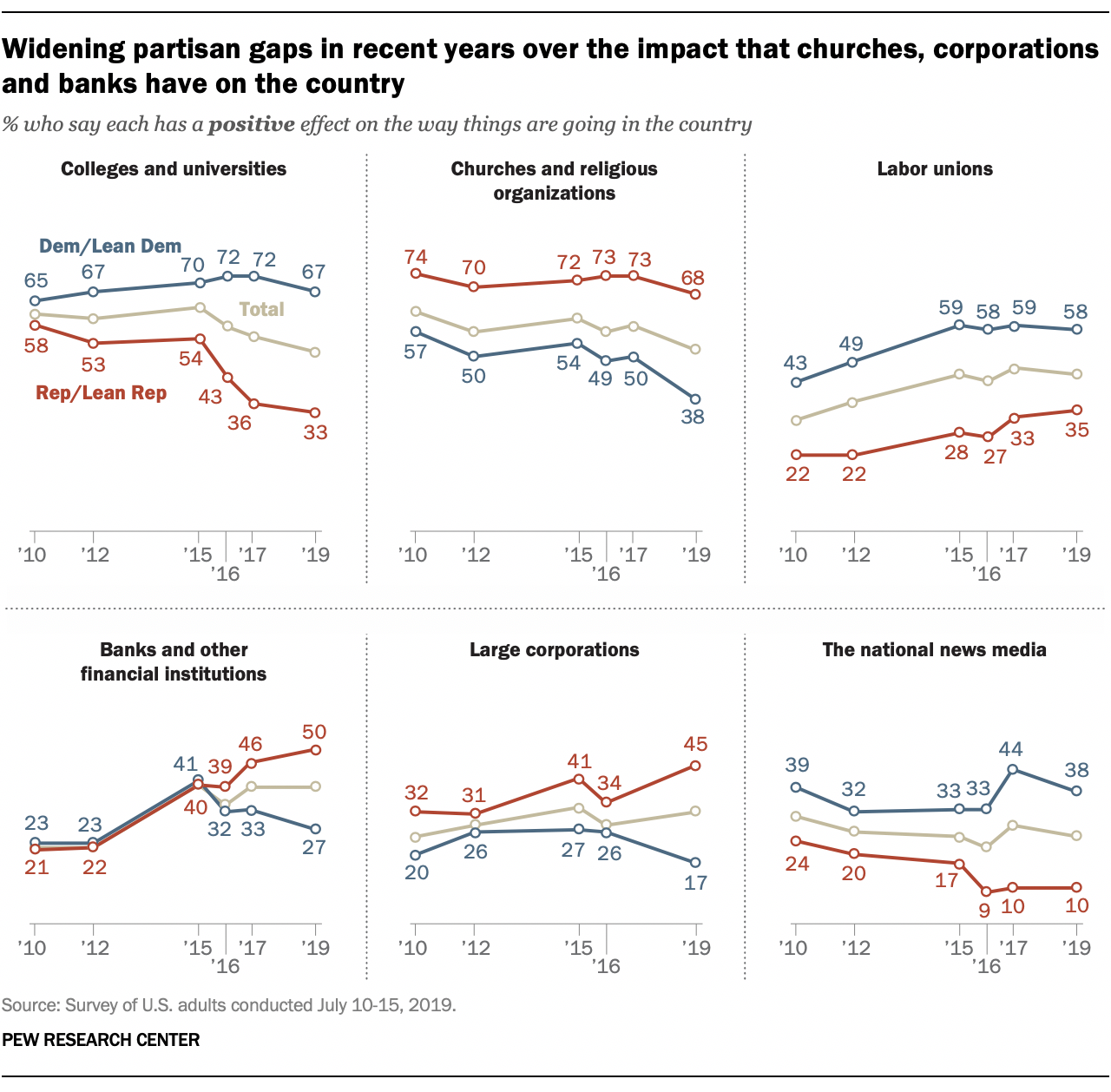 There has been a 12 percentage point decline in the share of Democrats who view the impact of churches positively (from 50% to 38%); Democrats are now evenly divided in these attitudes (38% positive, 40% negative). In five previous Pew Research Center surveys over the past decade, significantly more Democrats viewed the impact of religious organizations positively than negatively. Republicans continue to view religious organizations much more positively than do Democrats (68% positive in the new survey).

Republicans and Democrats also have moved further apart in opinions about how banks and large corporations affect the country. Half of Republicans say banks and other financial institutions have a positive effect on the U.S., compared with just 27% of Democrats. Two years ago, the partisan gap was less pronounced (46% of Republicans, 33% of Democrats).

Partisanship also remains a major factor in views of several other institutions, including labor unions, colleges and universities and the news media, according to the new survey. This echoes findings in a separate survey about trust and distrust in the U.S., released earlier this month, which found wide partisan differences in confidence that the leaders of major institutions – including religious leaders and journalists – act in the best interests of the public. 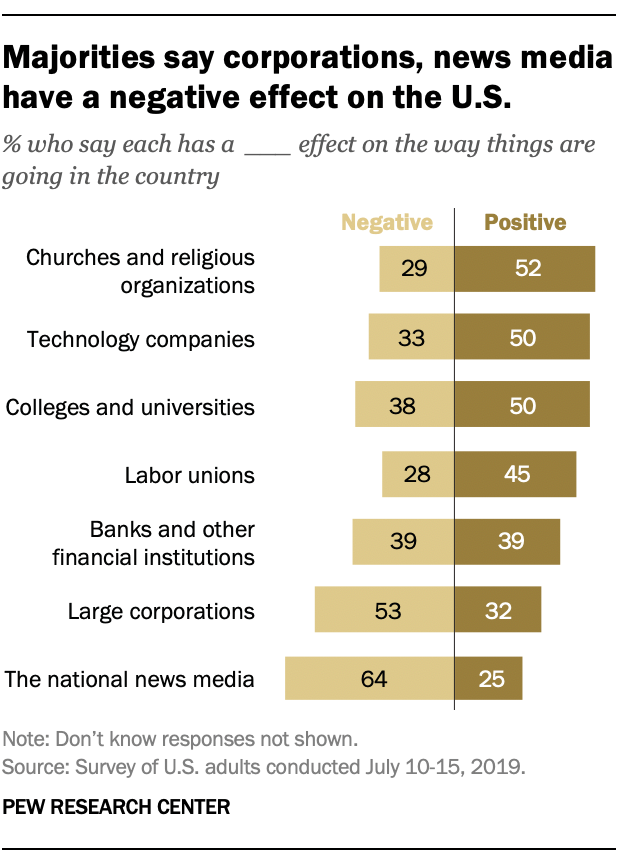 Despite the falloff in positive views of the impact of churches, technology companies and colleges in recent years, more Americans say those institutions and organizations have a positive effect than say they have a negative effect on the way things are going in the country. Similarly, more view the impact of labor unions positively than negatively. For technology companies and some other institutions (including unions and churches), about 20% or more volunteer that the impact has been mixed or offer no opinion.

Opinion is evenly divided over the effect of banks and financial institutions on the way things are going in the country (39% say they have a positive effect, while the same share views their effect negatively). On balance, more Americans say large corporations and the news media have a negative effect on the way things are going than say these institutions have a positive impact.