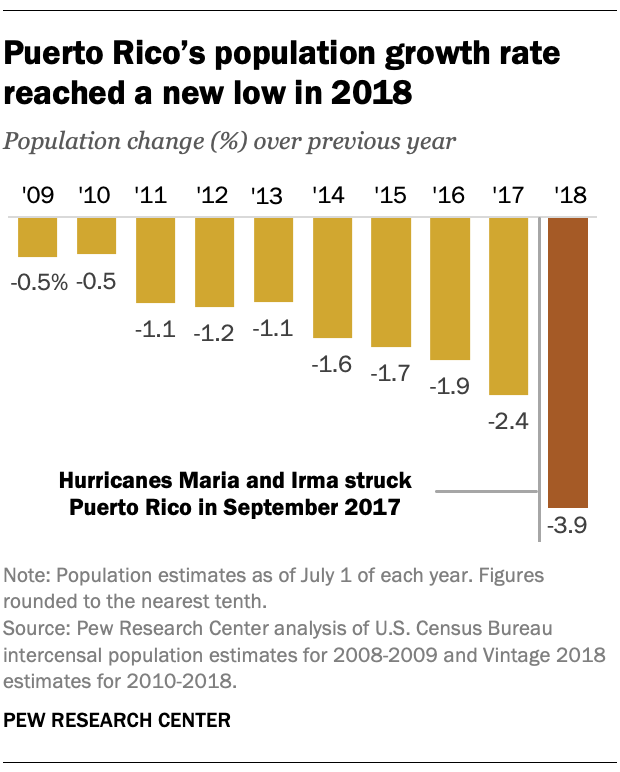 The population of Puerto Rico stood at 3.2 million in 2018, its lowest point since 1979 and down sharply from 2017, when hurricanes Maria and Irma hit the island, according to a Pew Research Center analysis of U.S. Census Bureau data. The 3.9% decline in 2018 represents the largest year-to-year drop since 1950, the first year for which annual data is available.

The number of people in Puerto Rico has dropped by 632,000 since its peak in 2004. Even before the hurricanes hit, Puerto Rico’s population was expected to drop to less than 3 million by 2025, according to projections published in 2017. The mid-2000s marked a turning point for the island’s economy, when it entered a recession from which it has not recovered. Since then, many Puerto Ricans have left the island for the U.S. mainland, in particular for Florida, often citing job- and family-related reasons.

Here are key facts on how Puerto Rico’s population has changed: 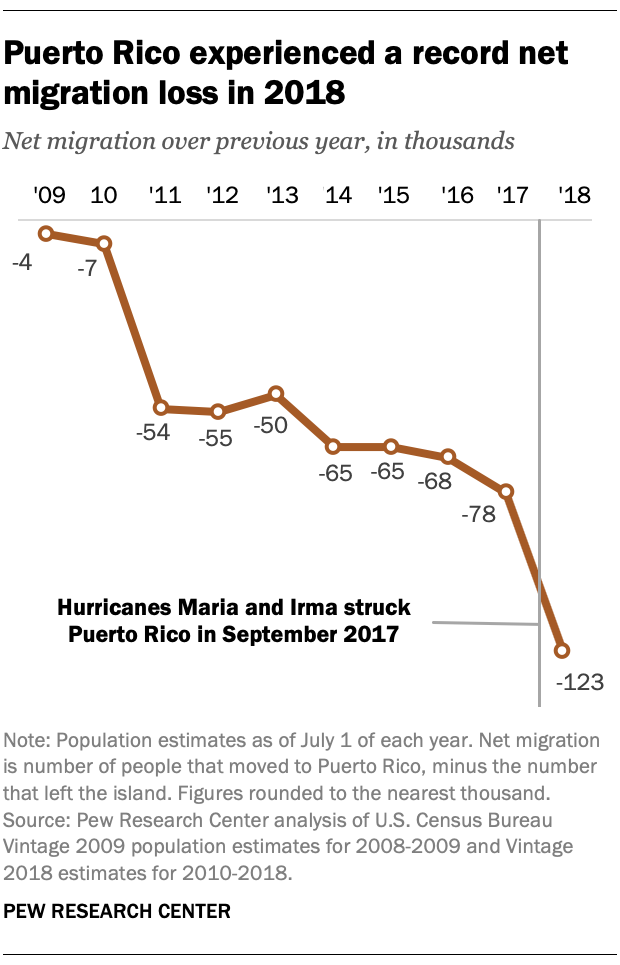 2Puerto Rico’s population last saw modest increases in the 1990s, and in recent years has experienced accelerating declines. Losses started around the beginning of the island’s economic recession in 2006 and have continued since then. From 2015 to 2018, Puerto Rico’s population decreased by 2.7% per year on average, compared with 1.4% from 2010 to 2015. 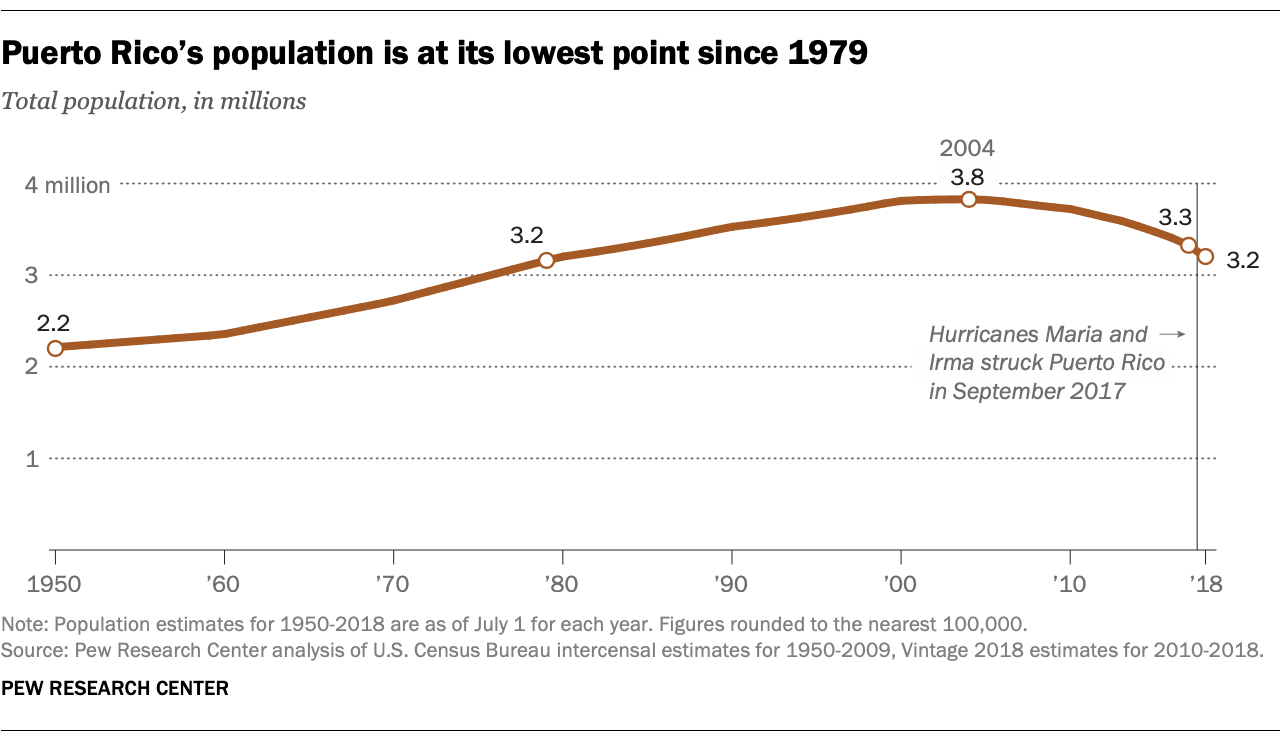 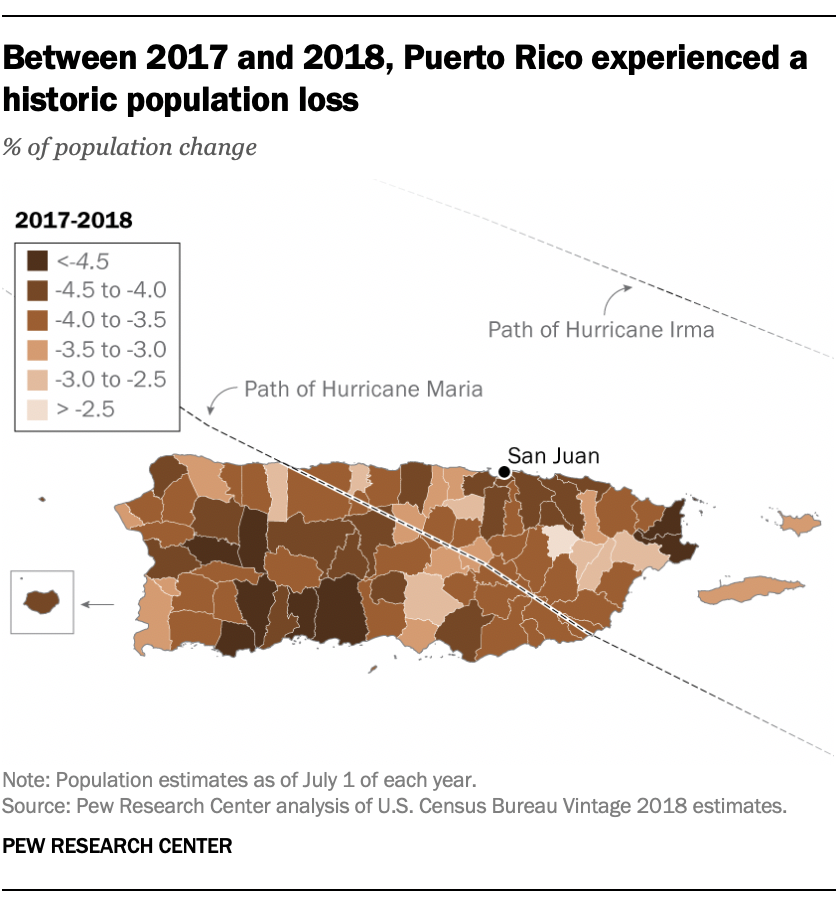 Every county, or municipio, in Puerto Rico lost population in 2018, with each seeing at least a 2% decrease. The municipios with the largest populations also experienced some of the fastest rates of decline. San Juan (population 321,000), Bayamón (170,000), Carolina (148,000) and Ponce (133,000) all had decreases of 4% or more. Las Marías had the island’s largest decrease, with a decline of more than 5%. 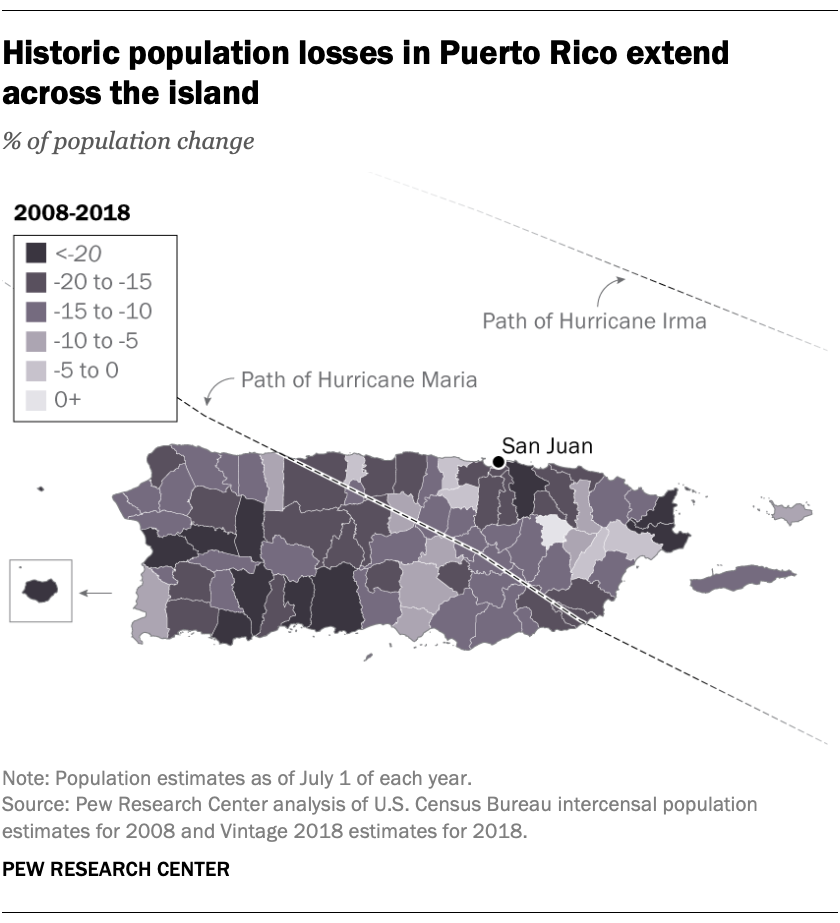 U.S. Hispanic population surpassed 60 million in 2019, but growth has slowed
Historic population losses continue across Puerto Rico
Key findings about Puerto Rico
Puerto Ricans leave in record numbers for mainland U.S.
Puerto Rico’s losses are not just economic, but in people, too
U.S. Image Plummets Internationally as Most Say Country Has Handled Coronavirus Badly
Support for Black Lives Matter has decreased since June but remains strong among Black Americans
How Trump compares with other recent presidents in appointing federal judges
The 2020 Trump-Biden matchup
An examination of the 2016 electorate, based on validated voters