Many Americans see declining levels of trust in the country, whether it is their confidence in the federal government and elected officials or their trust of each other, a new Pew Research Center report finds. And most believe that the interplay between the trust issues in the public and the interpersonal sphere has made it harder to solve some of the country’s problems. This research is part of the Center’s ongoing focus on issues tied to trust, facts and democracy. Here are some of the key takeaways from these findings: 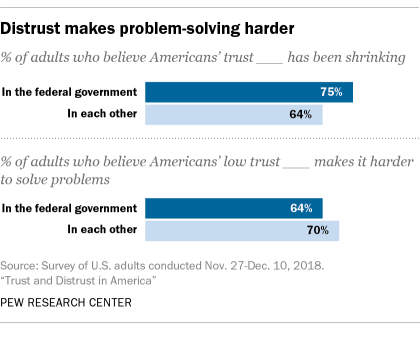 When asked a separate question about the reasons why trust has declined in the past 20 years, people offer a host of reasons in their written answers. Those who think there has been a decline of trust in the federal government over these two decades often see the problem tied to the government’s performance: 36% of those who see the decline cite this. Some worry the government is doing too much, others say too little, and others mention the government doing the wrong things or nothing at all. Respondents also cite concerns about how money has corrupted it and how corporations control the political process. President Donald Trump and his administration are mentioned in 14% of answers, and a smaller share lays the blame on Democrats. Additionally, 10% of those who see decline lay fault at the feet of the news media.

Those who think interpersonal trust has declined in the past generation offer a laundry list of societal and political problems, including a sense that Americans on the whole have become more lazy, greedy and dishonest. Some respondents make a connection between what they think is poor government performance – especially gridlock in Washington – and the toll it has taken on their fellow citizens’ hearts. Overall, 49% of adults think interpersonal trust has been tailing off because people are less reliable than they used to be.

2Nearly two-thirds (64%) say that low trust in the federal government makes it harder to solve many of the country’s problems. About four-in-ten (39%) who gave follow-up answers on why this was the case cite domestic concerns, topped by immigration and border issues, health care, racism and race-related issues, or guns and gun violence issues. Some also cite environmental issues, tax and budget matters, or political processes like voting rights and gerrymandering.

Another 70% of Americans believe that citizens’ low trust in each other makes it harder to solve problems. (They were not asked a follow-up question to explain their answer.)

3Most think the decline in trust can be turned around. More than eight-in-ten Americans (84%) believe it is possible to improve the level of confidence people have in the government. Their written responses about how to make headway on trust problems urge a variety of political reforms, starting with more disclosure of what the government is doing, as well as term limits and restrictions on the role of money in politics. Some 15% of those who answered this question point to a need for better political leadership, including greater honesty and cooperation among those in the political class.

Similarly, 86% believe it is possible to improve peoples’ confidence in each other. They say local communities can be laboratories for trust-building as a way to confront partisan tensions and overcome tribal divisions. Some also make the case that better leaders could inspire greater trust between individuals. Others suggest that a different approach to news reporting – one that emphasizes the ways people cooperate to solve problems – would have a tonic effect. 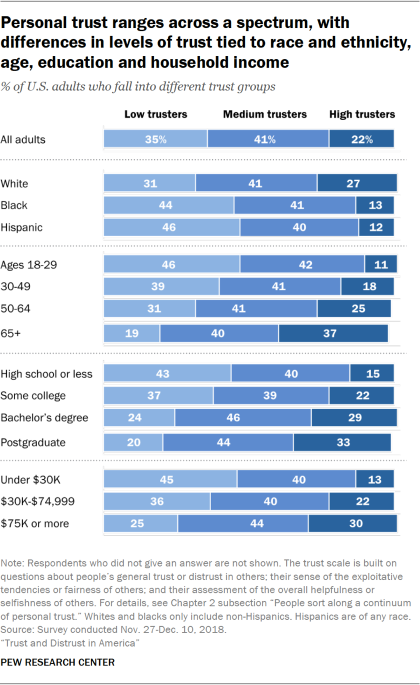 Nonwhites, poorer and less-educated individuals, and younger adults have lower levels of personal trust than other Americans. These differences show up when it comes to their sense of the exploitative tendencies or fairness of others, as well as their assessment of the overall helpfulness or selfishness of others. This illustrates a spectrum from least trusting to most trusting.

About a fifth of adults (22%) – who we call “high trusters” – display consistently trustful attitudes on these questions. More than a third (35%) – “low trusters” – express consistently wary or distrustful views. Some 41% – “medium trusters” – hold mixed views on core personal trust questions. (For an explanation of our classification of these different groups, see Chapter 2 of the report.)

On this scale, the share of whites who show high levels of trust (27%) is twice as high as the share of black (13%) and Hispanic adults (12%). The older a person is, the more likely they are to tilt toward more trustful answers. The more education Americans have, and the greater their household income, the greater the likelihood they are high on the personal trust spectrum. Those with less income and education are markedly more likely to be low trusters. Strikingly, nearly half of young adults (46%) are in the low trust group – a significantly higher share than among older adults.

5Levels of personal trust tend to be linked with people’s broader views on institutions and civic life. The disposition of individual U.S. adults to trust, or not to trust, each other is connected with their thinking about all manner of issues. For instance, high trusters often have significantly more positive views about their fellow Americans’ civic and political behaviors than do medium or low trusters. The gaps are particularly striking when it comes to how much confidence high trusters and low trusters express in Americans’ willingness to treat others with respect (54 percentage point gap between the high and low trust groups), respect the rights of people who are not like them (48 points), do what they can to help others in need and obey federal and state laws (both have 45-point gaps), accept election results regardless of who wins (43 points) and honestly report their full income when paying taxes (38 points). 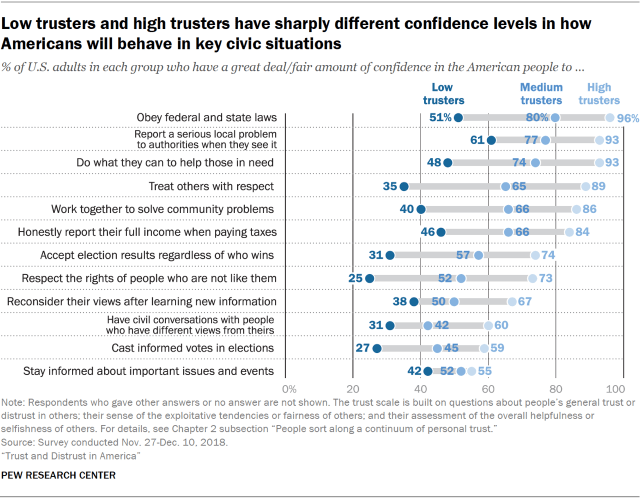 6Majorities believe the federal government and news media withhold important and useful information. People’s confidence in key institutions is associated with their views about the transparency of institutions. About two-thirds (69%) of Americans say the federal government intentionally withholds important information from the public that it could safely release, and 61% say the news media intentionally ignores stories that are important to the public. Those who hold those skeptical views are more likely than others to have greater concerns about the state of trust.

Some 44% of Americans say “yes” to both questions – that the federal government withholds information and the news media ignores stories. More Republicans and Republican-leaning independents than Democrats and Democratic leaners believe both institutions hold back information (54% vs. 38%).

7Democrats and Republicans think differently about trust, but both groups wish there would be more of it. Although supporters of the country’s two main political parties hold similar levels of personal trust, Democrats and those who lean Democratic are more likely than Republicans and Republican leaners to express worry about the state of trust in America. For example, Democratic partisans are more likely to say that trust in the federal government is shrinking (82% vs. 66%) and that low trust in the federal government makes it harder to solve many of the country’s problems (70% vs. 57%). At the same time, there is bipartisan agreement that it is important to improve trust in both the federal government and in fellow Americans, as well as that there are ways to do so.

8On a scale of national issues, trust-related issues are not near the top of the “very big” problems Americans see. But people often link distrust to the major problems that worry them. About four-in-ten adults (41%) think the public’s level of confidence in the federal government is a “very big problem,” putting it more than halfway down the list of other problems that were asked about. Confidence in government is roughly on par with problems caused by racism and illegal immigration – and a bit above terrorism and sexism. Some 25% say Americans’ level of confidence in each other is a very big problem, which is quite low in comparison with a broad array of other issues that more Americans perceive as major problems.

It is important to note, though, that some Americans see distrust as a factor inciting or amplifying other issues they consider crucial. For example, in their open-ended written answers to questions, some Americans say they think there are direct connections between rising distrust and other trends they perceived as major problems, such as partisan paralysis in government, the outsize influence of lobbyists and moneyed interests, confusion arising from made-up news and information, declining ethics in government, the intractability of immigration and climate debates, rising health care costs and a widening gap between the rich and the poor. 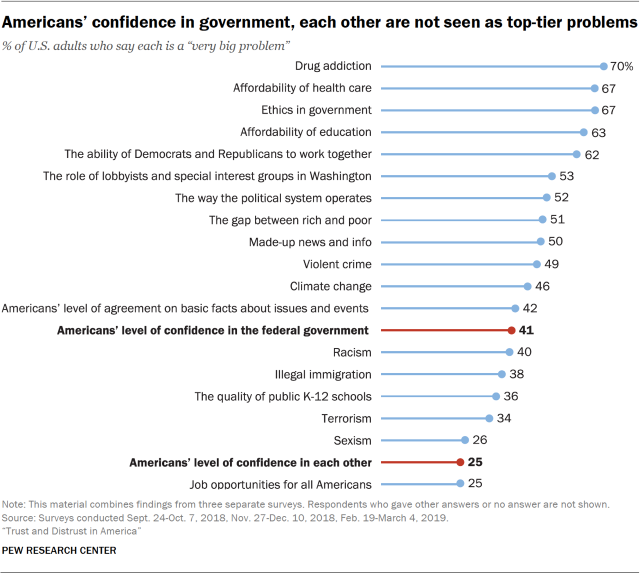