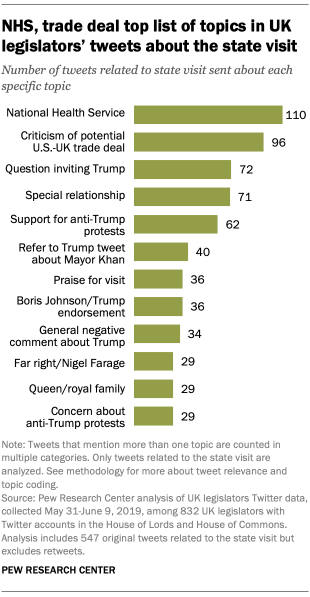 U.S. President Donald Trump characteristically took to Twitter during his state visit to the United Kingdom earlier this month, tweeting content ranging from calling London Mayor Sadiq Kahn “nasty” to praising the royal family’s hospitality. At the same time, UK legislators in the House of Lords and House of Commons tweeted more critical content of Trump’s visit, especially as it relates to U.S. influence on the UK, according to a new analysis of 547 tweets collected by Pew Research Center over 10 days immediately before, during and after the trip.

Among the legislators’ original tweets relevant to Trump’s visit, the most mentioned topic was the impact of a potential U.S.-UK trade deal on the National Health Service (NHS), the publicly funded, single-payer national health care system.

Many of the 110 NHS-related tweets expressed concern or disapproval that due to Brexit – Britain’s impending exit from the European Union – the UK would entertain a trade deal with the U.S. that could potentially open the NHS to greater involvement by U.S. health care companies. And among retweets shared by legislators during the time, the most retweeted sentiment came from the Labour Party’s official account, appealing to Britons to protect the NHS.

Our NHS is not for sale. pic.twitter.com/MBrMJH9Ic2

Critiques of a potential post-Brexit trade deal between the U.S. and UK drew the second-most mentions of the topics analyzed. Members of Labour, the Liberal Democrats and the Scottish National Party accounted for 89 of the 96 tweets in this category. Many of these tweets lamented that Brexit, especially a “no-deal Brexit,” would weaken the UK and give Trump the advantage in trade negotiations. More than half of these trade deal tweets also mentioned the NHS, with 15 specifically asserting that the NHS is not “for sale.” (Tweets that mentioned more than one topic were counted in multiple categories.)

On the other hand, nine tweets that were categorized separately expressed general pro-trade deal attitudes or asserted that the UK would be better served to strengthen their economic partnership with the U.S. upon leaving the EU.

The economic challenges that our world faces cannot be tackled alone. As part of the #USStateVisit @stevenmnuchin1 & I discussed how we’ll ensure the rules-based international system is fit for the future, and how we'll build on the opportunities of greater US-UK cooperation.

The thousands of protestors who gathered in London’s Trafalgar Square on the first day of the visit drew a number of positive tweets from legislators (62), and 23 tweets even mentioned personally participating in the demonstrations. Many tweets also argued that the UK should not have extended an invitation to Trump in the first place (72). Members of the Labour Party, Liberal Democrats and Greens tweeted more positive sentiment about the protests than Conservatives.

Today is not a demo against America, or the American people. It’s against Trumpism. I’m proud that London has a Muslim mayor. Trump’s values are not our values. I’m proud that the British people have come out today to show him.#TrumpProtest #TrumpUKVisit pic.twitter.com/kZPj9ULve1

However, not everyone seemed displeased with the visit. About 7% of relevant tweets (36) during this time, mostly from Conservative members of Parliament, welcomed the visiting president or expressed positive views about the trip.

It is right that we welcome the USA as one of our oldest and greatest allies. I hope the President @realDonaldTrump has a superb visit to the UK https://t.co/PxbPCKqujN

Additionally, 71 tweets alluded to the U.S.-UK “special relationship” or historical alliance: Many of these mentioned the 75th anniversary of D-Day, though others asserted the trip would hurt rather than strengthen bilateral ties. And 29 tweets expressed concern that anti-Trump protests would do more harm than good when it comes to trans-Atlantic relations or criticized the anti-Trump protesters.

Proud to be at Stansted this morning to greet @realDonaldTrump & @MELANIATRUMP as they arrive in the UK. Hugely exciting few days ahead celebrating our great friendship & honouring those who fought side by side to defend freedom from tyranny #USStateVisit pic.twitter.com/VBTkpU5saw

British political figures also featured prominently in many of the original tweets. For example, 32 tweets mentioned Labour Party leader Jeremy Corbyn by name, and 27 specifically discussed his decision to skip the state dinner with Trump. Boris Johnson appeared 36 times, and many of these tweets criticized Trump’s stated support for the British politician who had thrown his hat in the ring to be the next prime minister.

Queen Elizabeth or the royal family appeared in 29 tweets, generally garnering praise for the handling of the special relationship with the U.S. And Nigel Farage, current leader of the Brexit Party and former leader of the Euroskeptic UK Independence Party, had 29 tweets mention him or far-right politics.

The two houses of Parliament contain a combined 1,428 legislators, and 832 of them have a Twitter account. In all, 208 legislators – or 25% of members of the House of Lords and House of Commons on Twitter – tweeted about the bilateral event at some point from the three days before to the three days after the visit. (This analysis includes only original tweets – it excludes retweets.) 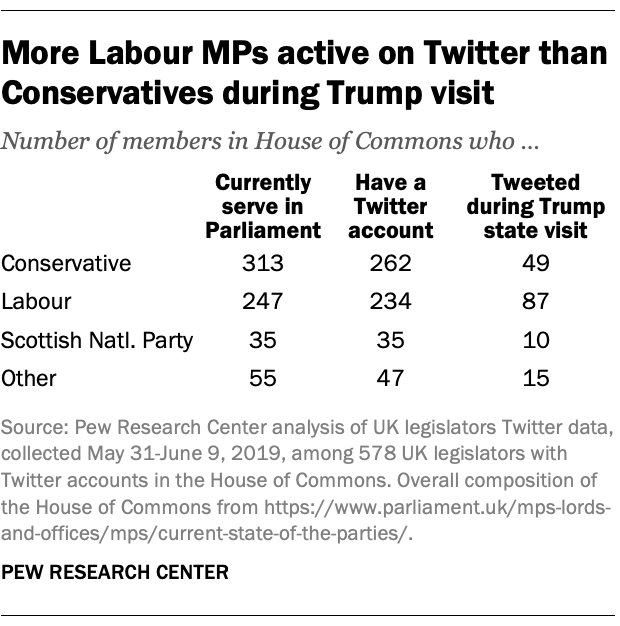 Members of Parliament sent 547 tweets about the state visit, with 427 specifically mentioning Trump by name. These tweets account for about 4% of all original tweets by legislators sent from three days before to three days after the state visit. The Labour Party, which accounts for about 38% of the vote share in the House of Commons, sent about half (49%) of the original tweets posted during the trip. Members of the Conservative Party, the largest in the House of Commons and governing party since 2010, sent only 19% of all original tweets.

The analysis also shows that 142 unique hashtags were used throughout the original tweets related to the trip. #TrumpUKVisit was tweeted out the most among UK legislators (26 instances), followed by #TrumpProtest (25), #Trump (19), #NHS (16) and #Brexit (15).