American motherhood has changed in many ways since Mother’s Day was first celebrated more than 100 years ago. Today’s moms are more educated than ever before. A majority of women with a young child are in the labor force, and more mothers are serving as their family’s sole or primary “breadwinner.” At the same time, the share of mothers who are stay-at-home moms has held steady in recent decades after falling precipitously in the 1970s and 1980s.

Here are some key findings about American mothers and motherhood from Pew Research Center reports:

Women are more likely now to become mothers than they were a decade ago, and this is particularly the case among highly educated women. The share of women at the end of their childbearing years (ages 40 to 44) who had ever given birth was 86% in 2016, up from 80% in 2006. This was similar to the share who were mothers in the early 1990s.

Over the past 20 years, highly educated women have experienced particularly dramatic increases in motherhood. In 2014, 80% of women ages 40 to 44 with a Ph.D. or professional degree had given birth, compared with 65% in 1994.

The shares of women who were mothers also rose among those with bachelor’s or master’s degrees during this period, while rates of motherhood remained steady for women with less than a bachelor’s degree, at 88%.

2Women are becoming mothers later in life. The median age at which women become mothers in the U.S. is 26, up from 23 in 1994. While this change has been driven in part by declines in births to teens, delays in motherhood have continued among women in their 20s. In 1994, more than half (53%) of women in their early 40s had become mothers by age 24; by 2014, this share had fallen to 39%. 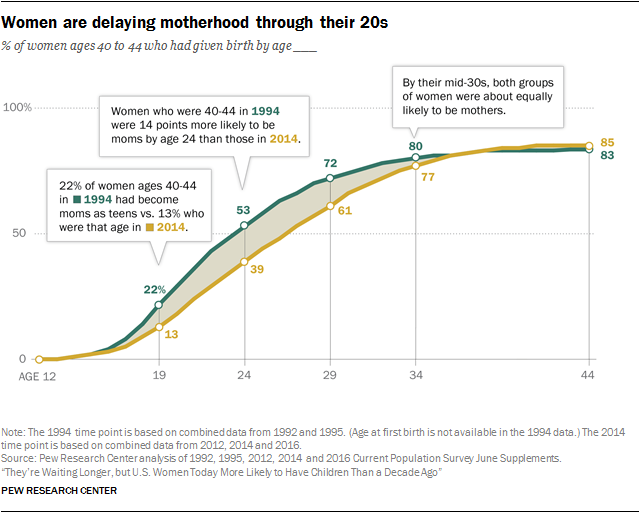 About one-in-four mothers are raising their children on their own. While most U.S. mothers are married (68%), nearly one-quarter (24%) are solo moms. All told, about 9 million mothers are living with a child younger than 18 without a spouse or partner. Solo motherhood is particularly common among black mothers (56% are in this category). By comparison, 26% of Hispanic moms, 17% of white moms and 9% of Asian moms are solo parents. (Solo parenthood is far less common among fathers: 7% of dads are raising a child without a spouse or partner in the home.)

A relatively small but growing share of moms are living with an unmarried partner. In 1997, 4% of mothers were cohabiting, and by 2017 that share had doubled to 8%. 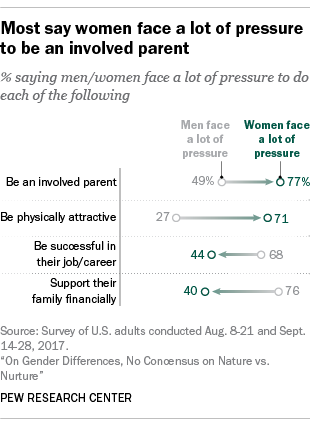 In contrast, most adults (76%) say men face a lot of pressure to support their family financially, while only 40% say women face this type of pressure.

6Foreign-born moms account for a rising share of U.S. births. While annual births have decreased among U.S.-born women since 1970, they have increased among the foreign born, driven both by a growing foreign-born population in the U.S. and by relatively high birth rates among that group. In the past quarter century, births to foreign-born moms have boosted fertility in all but two states. And they accounted for more than one-third of all births in three states in 2015 (New Jersey, New York and California). 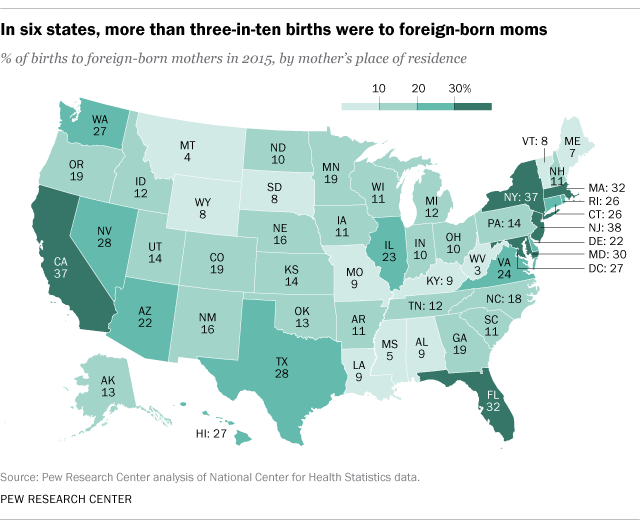