A narrow majority of U.S. adults (56%) say they are somewhat or very optimistic about what the country will be like in 2050, according to a new Pew Research Center survey. But optimism gives way to pessimism when Americans are asked about some of the specific ways in which the United States might change.

Most Americans expect income inequality to worsen over the next three decades. Majorities say the economy will be weaker, the nation’s debt burden will be heavier, the environment will be in worse condition and health care will be less affordable than today. Most believe the U.S. will play a less important role in the world. About two-thirds predict that domestic political divisions will become more pronounced. Indeed, Democrats and Republicans have strikingly different priorities when it comes to the policies they believe would help improve the quality of life for future generations.

Below are nine key findings from the survey, which was conducted among 2,524 U.S. adults in December 2018. 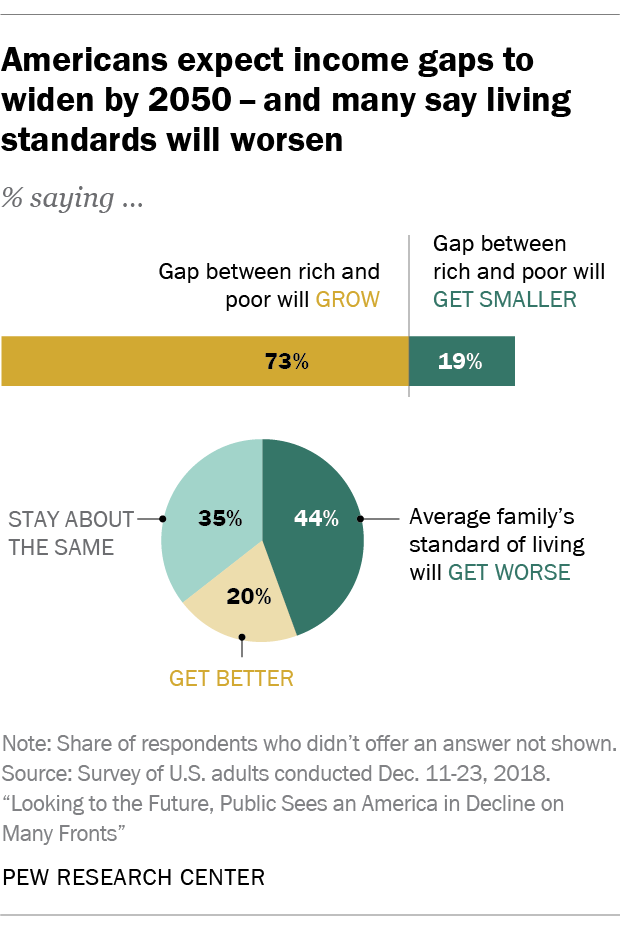 Most Americans expect income gaps to widen, and many see living standards declining. Roughly three-quarters of Americans (73%) say the gap between the rich and the poor will grow wider by 2050. This includes 75% of Democrats and Democratic-leaning independents and 71% of Republicans and GOP leaners – a notable area of agreement between partisans.

While Democrats and Republicans agree that income inequality will grow by 2050, they disagree over the extent to which the federal government should prioritize reducing the gap between the rich and the poor. Roughly six-in-ten Democrats (58%) say this should be a top priority, but only about a quarter of Republicans agree (23%).

More generally, the public is skeptical that the standard of living for average American families will improve in the future: 44% expect the living standard to get worse by 2050, about double the share who believe it will get better (20%). About a third (35%) believe there will be no real change. 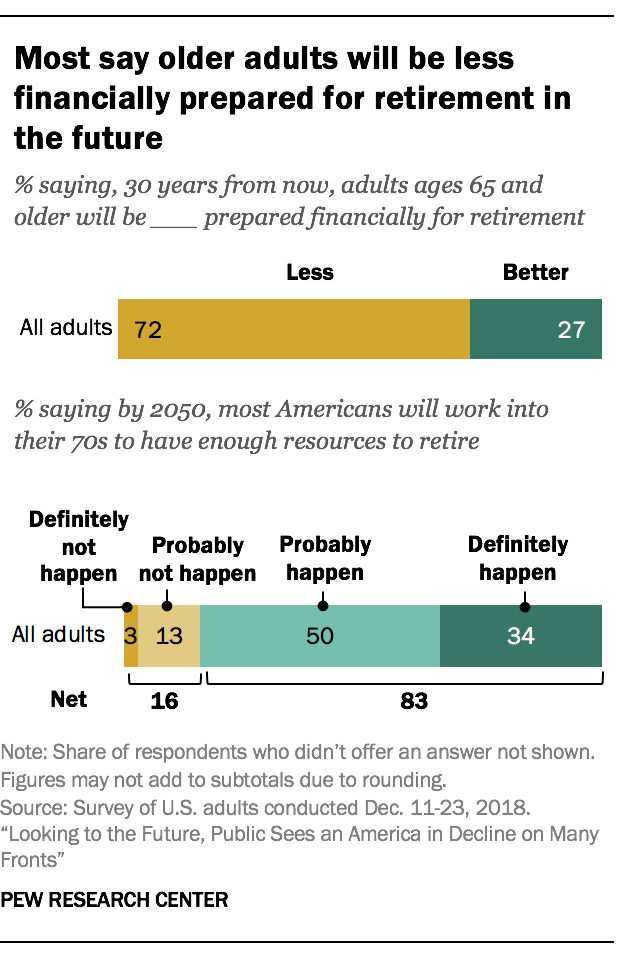 The public sees tougher financial times on the horizon for older Americans. A majority of U.S. adults (57%) say those ages 65 and older will have a worse standard of living in 2050 than they do today. About seven-in-ten (72%) say older adults will be less prepared financially for retirement than their counterparts today. And an even larger share (83%) believes most people will definitely or probably have to work into their 70s to be able to afford retirement.

Whatever their views about the viability of Social Security in the future, Americans are clearly opposed to a reduction in benefits. Roughly three-quarters of U.S. adults (74%) say Social Security benefits should not be reduced in any way, while only a quarter say some reductions for future retirees will need to be made. 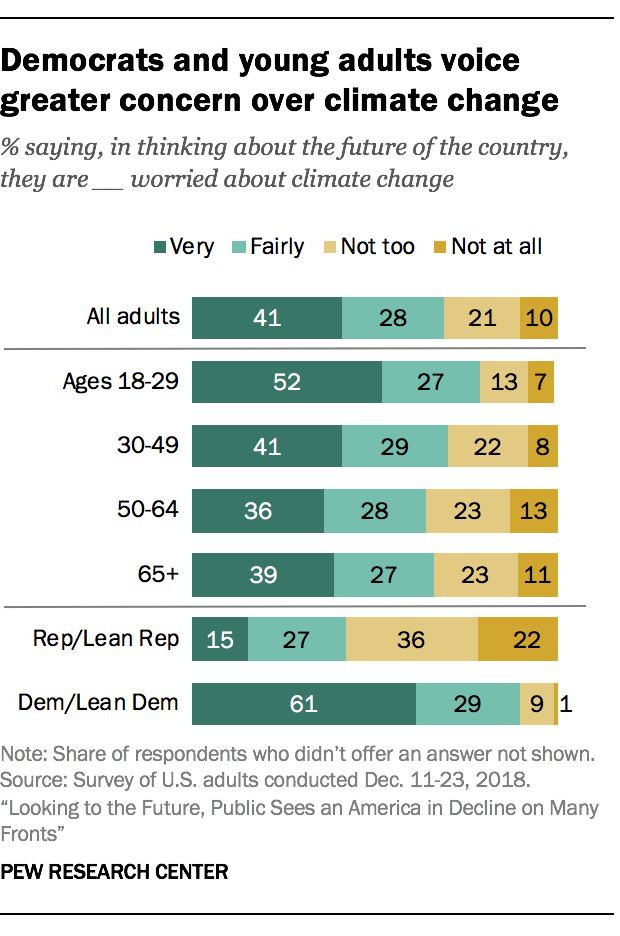 4Most Americans expect widespread job automation in the future, and few see this as a good thing for the U.S. Around eight-in-ten adults (82%) say, 30 years from now, robots and computers will definitely or probably do much of the work currently done by humans, though only 37% of employed adults say robots or computers will definitely or probably do the type of work that they personally do.

Around three-quarters of Americans (76%) say inequality between the rich and the poor would increase if robots and computers perform most of the jobs currently being done by humans, and a majority (66%) say it is unlikely that this kind of widespread automation would create many new, better-paying jobs for humans. 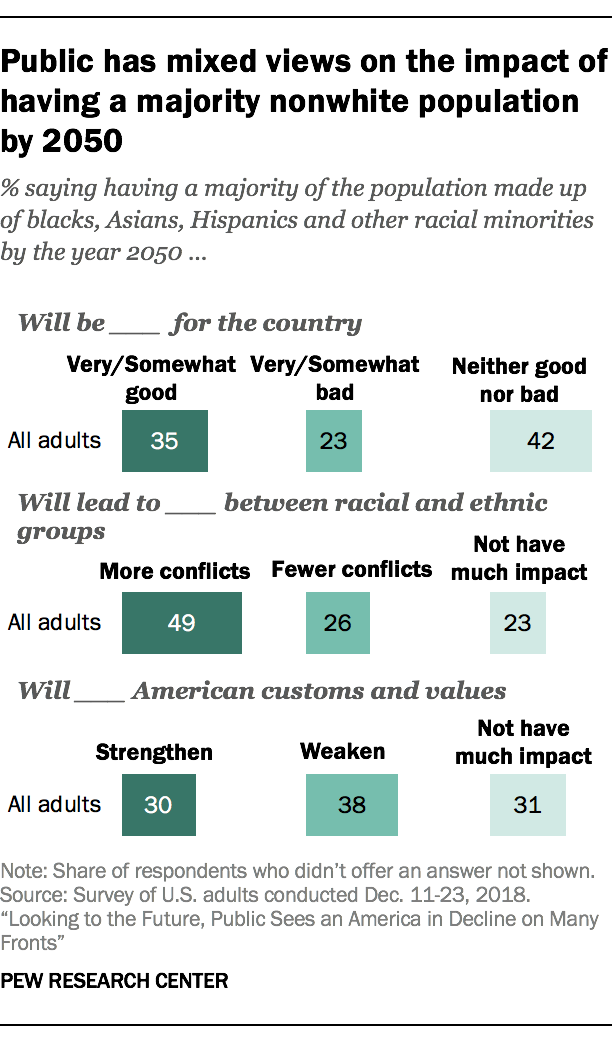 Americans are more likely to see the nation’s shift to “majority-minority” status as a good thing than a bad thing, but a plurality say it’s neither good nor bad. The Census Bureau projects that blacks, Hispanics, Asians and other racial and ethnic minorities will account for a majority of the U.S. population by 2050. About a third of U.S. adults (35%) say this change will be a good thing for the country, while 23% say it will be a bad thing. A plurality (42%) says it will be neither good nor bad.

While most of the public sees a majority nonwhite population as either a positive or neutral development for the country, a greater share of adults say this change will lead to more conflicts between racial and ethnic groups (49% say this) than say it will lead to fewer conflicts (26%). The public is also more likely to say this shift will weaken American customs and values (38%) than to say it will strengthen them (30%).

7Americans see a smaller role for the U.S. on the world stage. Six-in-ten adults say the country will be less important in the world in 2050 than it is today. The public is divided over how prominent China will be in the future: 53% say China will definitely or probably overtake the U.S. as the world’s main superpower, while 46% believe this definitely or probably won’t happen.

In addition, 65% of adults say the U.S. will be more politically divided in 2050 than it is today, and this belief is held across partisan lines: 68% of Republicans say this, as do 62% of Democrats. 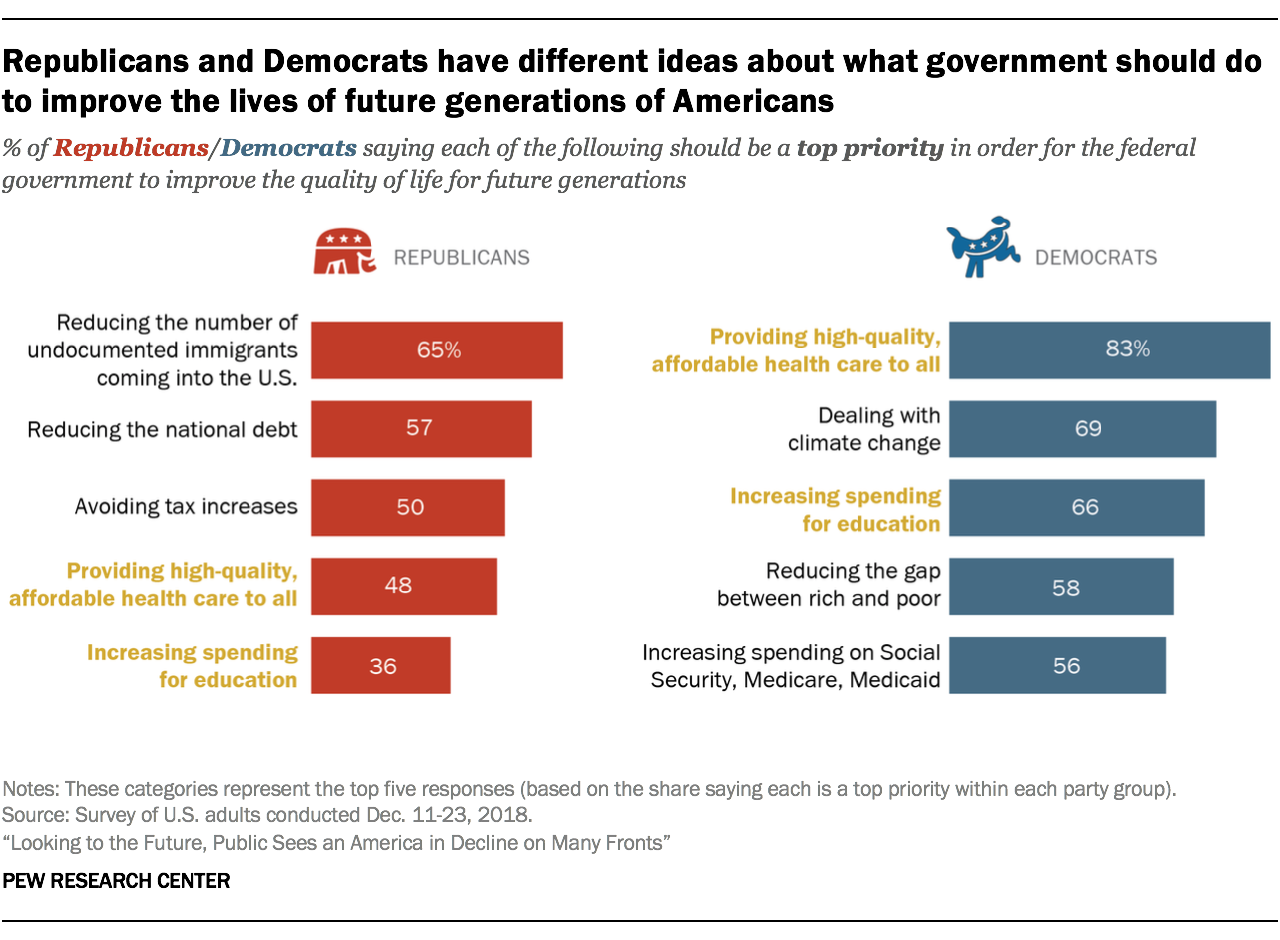