A standoff between President Donald Trump and Democratic congressional leaders over how to address unauthorized immigration at the U.S.-Mexico border has led to a partial shutdown of the federal government – one that is now the longest on record.

The United States was home to 10.7 million unauthorized immigrants in 2016, a 13% decline from a peak of 12.2 million in 2007, according to the most recent Pew Research Center estimates. This decade-long decline was driven almost entirely by a decrease in unauthorized immigrants from Mexico, even as the numbers from El Salvador, Guatemala and Honduras increased. Meanwhile, a growing share of unauthorized immigrants were not people who had entered the country illegally, but had arrived legally and then overstayed their visas.

More recent data from the federal government show that 2018 saw an uptick in border apprehensions (which are often used as a proxy measure for unlawful entries). There were nearly 467,000 apprehensions at the southwest border last year, the most in any calendar year since at least 2012. Still, the number of apprehensions in 2018 remained far below the more than 1 million apprehensions per fiscal year routinely recorded during the 1980s, 1990s and 2000s.

As Trump and Democrats press their cases about ways to end the government shutdown, here’s a look at how Americans see illegal immigration – as well as their views toward the president’s proposed expansion of the border wall and how much political leaders should be open to compromise:

2Republican and Democratic voters sharply disagree over whether illegal immigration is a major problem in the U.S. today. In a survey conducted ahead of last year’s midterm elections, three-quarters of registered voters who planned to support the GOP candidate in their congressional district said illegal immigration was a very big problem in the country, versus just 19% among voters who planned to support their Democratic candidate for Congress. 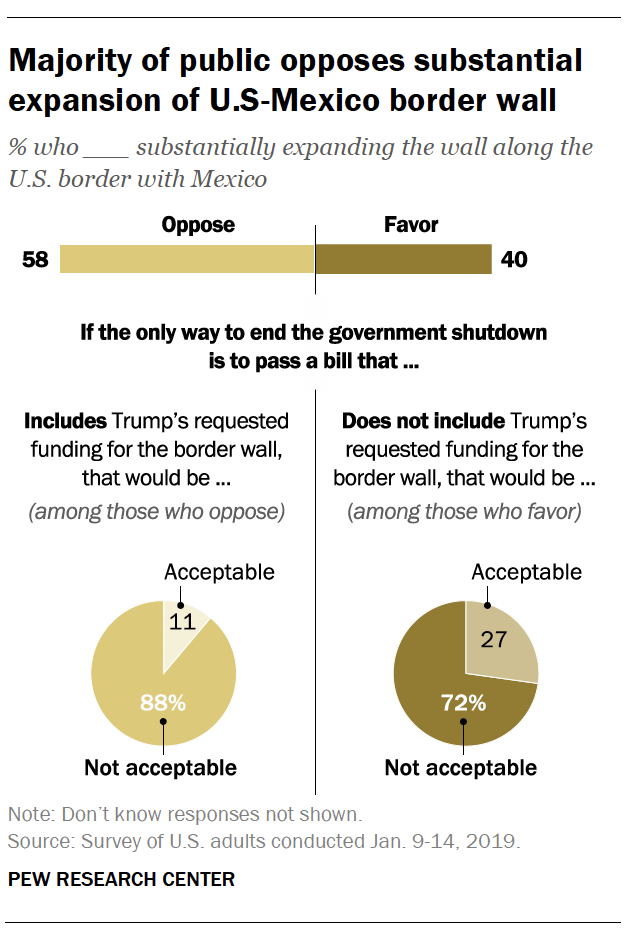 A majority of Americans (58%) oppose substantially expanding the wall along the U.S.-Mexico border – as Trump has sought – while 40% support doing so, according to a January 2019 survey by the Center. Attitudes diverge sharply by party: Around eight-in-ten Republicans and Republican-leaning independents (82%) support expanding the wall, while an even larger share of Democrats and Democratic leaners (93%) oppose it.

5Many Americans disapprove of the way shutdown negotiations are being handled. A little over a third of Americans (36%) approve of Trump’s handling of the negotiations, while the same share approves of the way congressional Republicans are handling the situation. Public views of Democratic leaders’ handling of the shutdown talks are somewhat more positive than views of Trump or GOP leaders – still, less than half (43%) approve.

6Disagreement between partisans extends to the effects of a wall. Around seven-in-ten Republicans (69%) say substantially expanding the wall along the U.S. border with Mexico would lead to a major reduction in illegal immigration into the country, according to the January 2019 survey. About the same share of Democrats (70%) say it would not have much impact on illegal immigration into the U.S.

7Proximity to the Mexican border is a factor in Republicans’ views of a border wall. Republicans overwhelmingly favor building a wall along the entire border, but Republicans who live closer to the border are somewhat less likely to favor it, according to an analysis by the Center based on February 2017 survey data. The analysis found that 63% of Republicans who live within 350 miles of the border favor a wall along the entire border, compared with 74% of Republicans overall. Among Democrats, opposition to a wall is overwhelming regardless of their distance from the border. 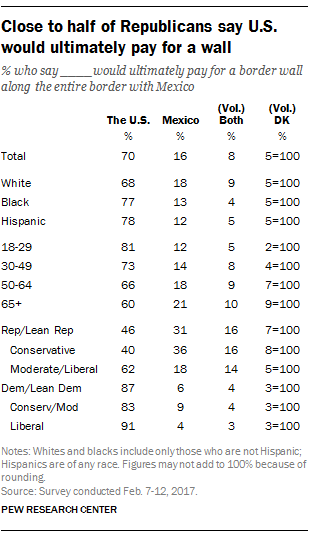 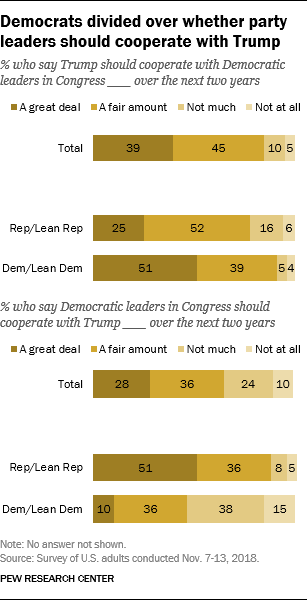 Whatever else they think of him, about two-thirds of Americans (68%) – including around half of Democrats – say Trump stands up for what he believes in, according to a September 2018 survey. Around nine-in-ten Republicans (91%) say Trump stands up for his beliefs, as do 52% of Democrats – a far higher share of Democrats than give the president positive marks on other personal qualities, such as being a strong leader, being well-informed and being trustworthy.