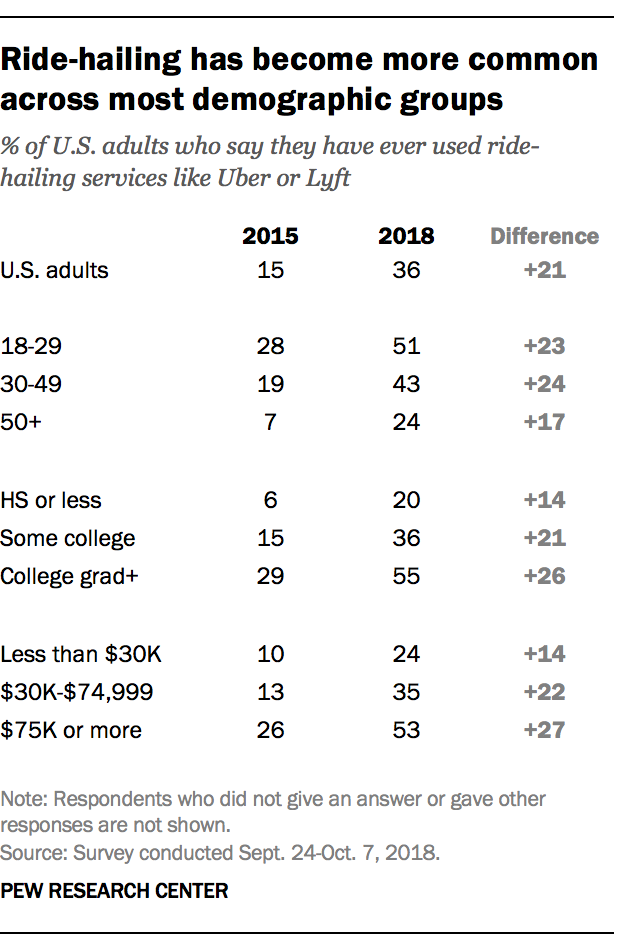 Ride-hailing use has increased across most demographic groups, but adoption figures continue to vary by age, educational attainment and income level. For example, roughly half of Americans ages 18 to 29 (51%) say they have used a ride-hailing service, compared with 24% of those ages 50 and older. Those whose annual household income is $75,000 or more are roughly twice as likely as those earning less than $30,000 to have used these services (53% vs. 24%). And over half of adults with a bachelor’s or advanced degree (55%) say they have used these services, compared with 20% of those who have a high school diploma or less.

Ridership also varies substantially in different types of communities. While 45% of urban residents and 40% of suburban residents have used a ride-hailing app, only 19% of Americans living in rural areas have done so. (This survey categorized Americans as urban, suburban or rural based on their own description of their community type.) 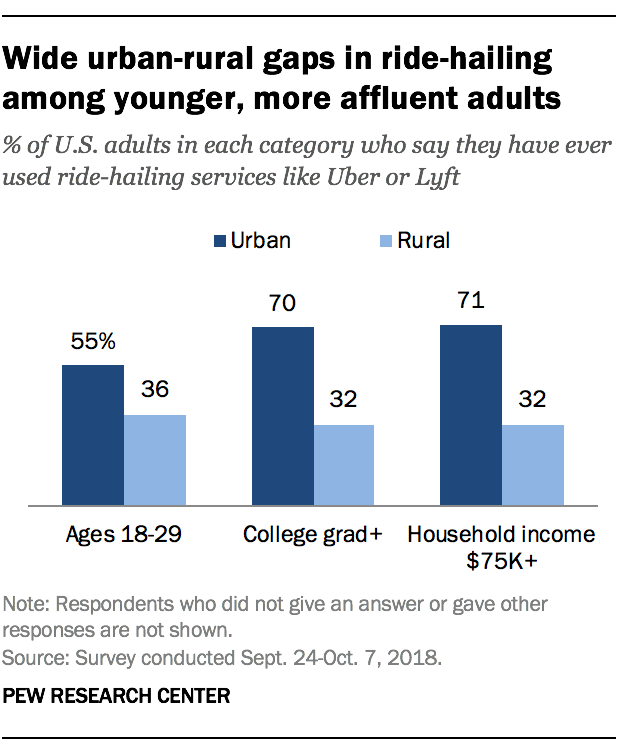 Notably, adoption gaps between urban and rural Americans are present even within groups that collectively use ride-hailing services at high rates. For example, among Americans who earn $75,000 or more annually, urban residents are more than twice as likely to have used these services as high-income individuals living in rural communities (71% vs. 32%). Substantial urban-rural differences also exist among Americans with a college degree and among those ages 18 to 29.

These differences could be related to the fact that ride-hailing services are less widespread in rural areas. This survey did not specifically ask if people knew whether ride-hailing services were available in their community, but a separate Center survey conducted earlier this year found that rural residents were significantly more likely than those living in other areas to say access to public transportation is a major problem where they live.

Ride-hailing companies have made efforts to expand their services to rural and remote areas. But lower population density, long travel distance and relatively low incentives for drivers are often cited as potential hurdles.

Even as the share of Americans who use ride-hailing has grown substantially in recent years, the new survey finds that few adults overall are making these services a part of their regular routine. Only one-in-ten users of ride-hailing services say they use these apps at least weekly, including just 2% who say they use them every day or almost every day. Another 22% are monthly users, while a majority of users (67%) utilize these services less than once a month. Put differently, a mere 4% of the U.S. adult population today uses ride-hailing apps on a weekly basis – a share that is largely unchanged from 2015, when 3% of Americans reported being weekly riders.

While only a small share of ride-hailers report using these apps weekly, some groups are more frequent users than others. Urban users (19%) are more likely to use these services weekly than suburban (6%) or rural users (5%). And users ages 18 to 49 are somewhat more likely than those 50 and older to report weekly usage (12% vs. 7%).

Ride-hailing services are seen by minorities as a benefit to areas underserved by taxis
Americans and the new digital economy: 8 key findings
10 tech-related trends that shaped the decade
The smartphone: An essential travel guide
Q&A: How Pew Research Center studied gig workers in the U.S.