When Republicans lost their House majority in this year’s midterm elections, the toll was especially high among GOP moderates, according to a new Pew Research Center analysis. 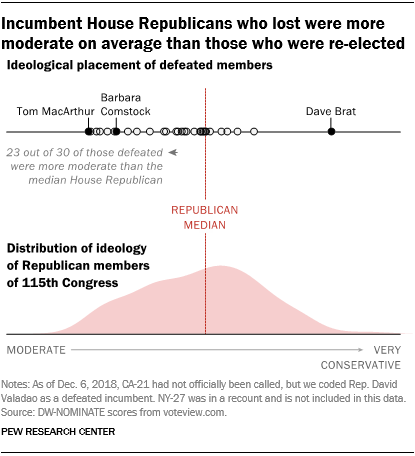 Prior to Election Day, many members decided not to run for re-election. Out of 36 retirements in advance of the election, 26 were Republicans (the figures here exclude those who resigned as a result of a scandal, decided to run for some higher office, or were appointed to some position within the Trump administration). Overall, these members’ ideologies were not much different from those who ran for re-election.

Note: See full list of Republican House members who were defeated in the 2018 midterms here (PDF).

House Freedom Caucus on Twitter: Going negative and getting attention

Freedom Caucus likely to play a bigger role in new GOP-led House. So who are they?