One-in-ten Americans say they feel lonely or isolated from those around them all or most of the time, according to a Pew Research Center survey conducted earlier this year. While this is a small share of U.S. adults overall, the share rises significantly for some groups, including those who feel weak ties to the communities they live in and those who are financially stressed. 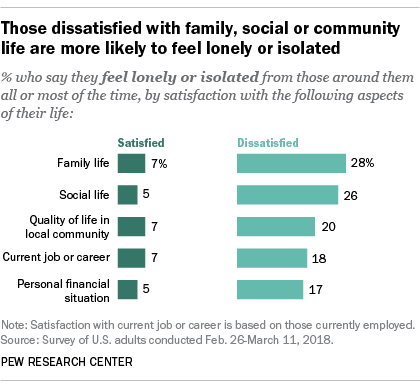 Personal finances also relate to feelings of loneliness. People who say they are somewhat or very dissatisfied with their personal financial situation are significantly more likely to express feeling frequent loneliness than those who are satisfied with their finances (17% vs. 5%). Similarly, 14% of those who say they don’t have enough income to lead the kind of life they want report feeling lonely or isolated frequently, compared with just 5% of those with enough income to lead their ideal life.

A similar pattern emerges when looking at annual income: 16% of those with an annual family income less than $30,000 say they feel lonely all or most of the time, compared with 9% of middle-income adults and 6% of higher-income adults.

While loneliness is more common among some groups than others, the share of people who feel this way is fairly consistent across most major demographic groups. Roughly one-in-ten Americans say they feel lonely all or most of the time across gender, racial and ethnic, and age groups. There are few differences by community type or party affiliation. In addition, even parental status and the number of years spent living in a community aren’t strongly correlated with feelings of loneliness or isolation.

Marital status is, however. Those who are divorced or have never been married (17% each) are more than twice as likely to feel frequent loneliness than those who are married (6%).