The 2018 midterm elections not only sent a record number of women to the House of Representatives – at least 102 in total, including 36 newly elected members, with a handful of races still to be called – but also significantly boosted the number of Millennials and Generation Xers in the lower chamber, according to a Pew Research Center analysis. 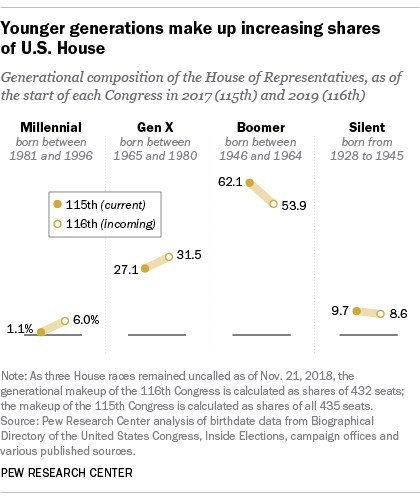 When the 116th Congress convenes in January, at least 26 House members will be Millennials (i.e., born between 1981 and 1996), up from only five at the start of the current Congress in January 2017 and six just before the Nov. 6 midterms. (Pennsylvania Democrat Conor Lamb, 34, won a special election this past spring for a seat that had been vacated by Tim Murphy, a Boomer; Lamb and the five other serving Millennials all were re-elected.) More than a fifth (20) of the 91 freshmen members-elect are Millennials, and 14 of those 20 are Democrats – including Alexandria Ocasio-Cortez of New York, at 29 the youngest woman ever elected to Congress. (All figures in this post are as of Nov. 21, when three seats had yet to be called.)

The influx of younger representatives will bring the House’s median age down a bit, even with the 341 continuing members being nearly two years older than when the current Congress began. Come Jan. 3, 2019, the median age of the new House will be 58.0 years, compared with 58.4 when the 115th Congress began its term. 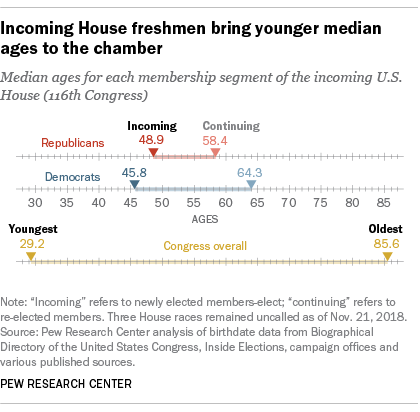 The age gap between continuing and new House members is widest among Democrats, a fact that’s coming into play in the debate over who should lead House Democrats going forward. The median age of the 173 Democrats who were re-elected will be 64.3 as of Jan. 3; the 60 newly elected Democrats will have a median age of 45.8. (By comparison, the median age for the 20 Democrats who retired or chose to run for some other office will be 60.4 as of that date.)

The midterms also increased Generation X’s representation in the House: Just less than half (44) of the 91 newly elected representatives are part of America’s “middle child” generation (those born between 1965 and 1980). Almost a third (136 members, or 31.5%) of the next House will be Gen Xers, a net increase of 18 from the start of the current Congress.

Although the Baby Boom generation (those born between 1946 and 1964) remains the majority in the House, its numbers are shrinking, from 270 members (62.1% of the total) at the start of the 115th Congress to 233 (53.9%) as of next January. And despite the election of Donna Shalala, D-Fla., who at 77 is this year’s oldest incoming “freshman,” the Silent Generation’s House ranks continue to dwindle: from 42 at the start of the 115th Congress, to 40 on Election Day, and just 37 when the new Congress is seated in January. (Silents were born between 1928 and 1945.)

For this analysis, we obtained ages and birthdates of incoming members either directly from their campaigns or offices or from reputable published sources (most notably the series of “candidate conversations” conducted by political analysis firm Inside Elections). For current and former House members we relied on the online Biographical Directory of the United States Congress.

Boomers, Silents still have most seats in Congress, though number of Millennials, Gen Xers is up slightly
The changing face of Congress in 7 charts
Younger generations make up a majority of the electorate, but may not be a majority of voters this November
A record number of women are serving in the 117th Congress
Gen Z, Millennials and Gen X outvoted older generations in 2018 midterms