No major American city has come close to Chicago’s soaring murder total in the past few years. The Windy City recorded nearly 1,900 homicides between 2015 and 2017, a period during which the next-closest city, Baltimore, registered around 1,000.

However, when adjusting for its large population, Chicago is by no means the nation’s “murder capital.” For decades, in fact, it has had fewer murders per capita than many other U.S. cities with smaller populations, according to FBI data going back to 1985. 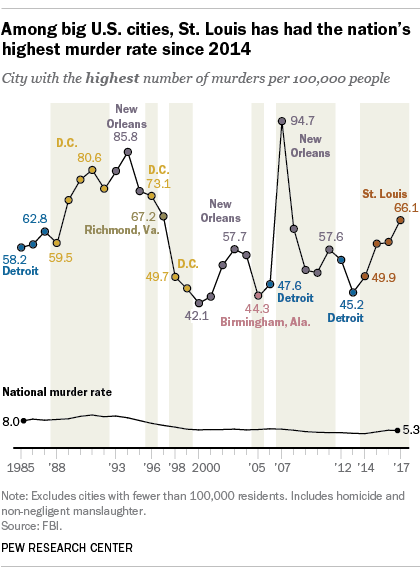 For its part, Chicago ranked 14th among cities with at least 100,000 people in 2017. Its 653 murders, measured against a population of more than 2.7 million, translated to a murder rate of 24.1 homicides per 100,000. That was less than half the rate in St. Louis and Baltimore and below the rates of cities including Cleveland; Memphis, Tennessee; and Newark, New Jersey.

St. Louis has had the nation’s highest big-city murder rate every year since 2014. Baltimore, Detroit and New Orleans have all been in the top five during that span, according to the FBI, which collects data each year from thousands of local, state, federal and other law enforcement agencies. (It’s important to note that not all police agencies submit data to the FBI every year, which can make comparisons across cities or time periods difficult. This analysis is further restricted to cities that currently have at least 100,000 residents. Flint, Michigan, for example, has long had a high murder rate but is excluded because its population is under 100,000. Murder figures include homicides and non-negligent manslaughters that are reported by police; they are not based on conviction data.)

The cities that perennially have the most murders per capita have homicide rates that are much higher than the nationwide average. In St. Louis and Baltimore, for instance, murder rates in 2017 were more than 10 times the U.S. average of 5.3 homicides per 100,000 people. In 2007, amid an increase in violent crime and a decrease in population following Hurricane Katrina, New Orleans’ murder rate was more than 16 times the national average (94.7 homicides per 100,000 people versus 5.7 per 100,000 nationally). 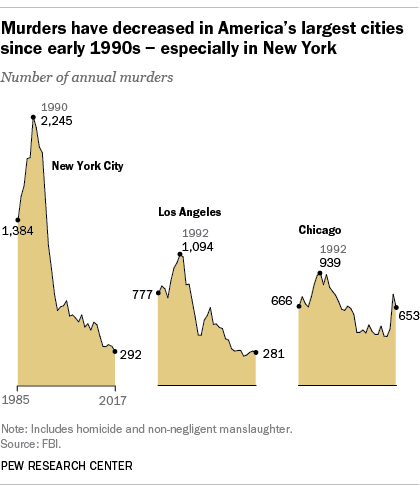 While Chicago’s murder rate is far from the highest in the nation, it has led the U.S. in murder totals each year since 2012. Since 1985, only two other cities have held this distinction: New York and Los Angeles, which are also the only two American cities with larger populations than Chicago’s.

Chicago’s annual murder total reached its highest level in two decades in 2016 (765 murders), but New York, Los Angeles and several other big cities have enjoyed long-term declines. No decrease has been more dramatic than New York’s: The 292 murders that took place in the Big Apple in 2017 were down from a peak of 2,245 in 1990. In fact, New York’s murder rate – 3.4 homicides per 100,000 people – is now below the national average.