Many of the millions of Americans voting in Tuesday’s midterm elections will have to do so while working around the demands of their jobs – hitting their polling places before work, taking an extra-long lunch break or going afterward and hoping to make it before the polls close. As they stand in line, many of them may wonder why it is that the United States votes on a Tuesday, of all days. (To be fair, more than 38 million Americans already have voted early in person, by mail or by absentee ballot, according to a tally maintained by University of Florida political scientist Michael McDonald.)

The first law designating Election Day as the first Tuesday after the first Monday in November was passed back in 1845. At the time, every state except South Carolina was choosing its presidential electors by popular vote, and had considerable flexibility in deciding when to hold its elections. But as transportation and communications links between the states improved, concern grew that later-voting states could be influenced by the results in earlier-voting ones. (As the Congressional Globe wrote, paraphrasing one congressman’s remarks, “The object of this bill was to guard against frauds in the elections of President and Vice President, by declaring that they shall all be held on the same day.”)

But why November, and why on a Tuesday? As a State Department explainer from 2008 put it, back then the U.S. was a predominantly agrarian society. November made sense because it was after farmers were done with their harvest, but before hard winter weather that could make it difficult for them to get to town to vote. And since traveling by horse over unimproved roads could take a while, lawmakers wanted to avoid making their constituents travel to or from the polls on a Sunday (widely considered a day of rest and worship, not politicking). 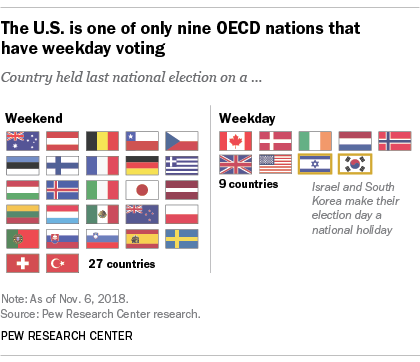 In the 21st century, however, America’s election schedule makes it an outlier among advanced industrial democracies. A Pew Research Center analysis finds that 27 of the 36 member countries of the Organization for Economic Cooperation and Development hold their national elections on the weekend, while two others (Israel and South Korea) hold elections on weekdays but make those days national holidays so economic hardship won’t be a barrier to electoral participation.

There have been repeated proposals in the U.S. over the years to either move Election Day to the weekend or make it a federal holiday, on the grounds that doing so would boost turnout. A recent Pew Research Center poll found bipartisan majority support for the idea: 71% of Democrats and Democratic-leaning independents and 59% of Republicans and GOP leaners said they would support making Election Day a national holiday. But while proposals to do that have periodically been introduced in Congress, none have gotten very far. 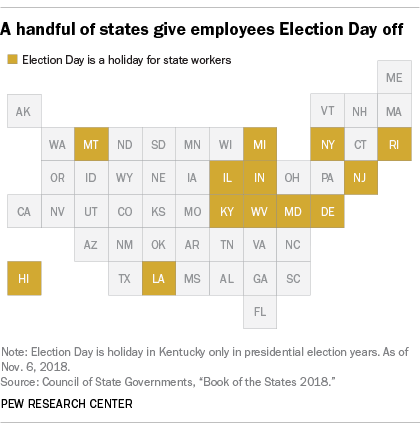 Election Day is, however, a paid holiday in 13 states, at least for state employees (though Kentucky state workers only get the day off in presidential-election years); in New Mexico, state workers are allowed two hours of paid administrative leave to vote. Many states require employers to give their workers time off to vote; in some states, such as New York and California, workers can’t be docked any pay for taking time off to vote. And many employers, from outdoor clothing company Patagonia to restaurant chain Cava, have taken it upon themselves to give their workers paid time off to vote this year.

Exit polls, election surveys and more: A guide for the 2018 midterms
Just how does the general election exit poll work, anyway?
Election night marks the end of one phase of campaign 2020 – and the start of another
For many Americans, Election Day is already here
Voters anxiously approach an unusual election – and its potentially uncertain aftermath