Major demographic shifts are reshaping the United States. The country is growing in population while becoming older and more racially and ethnically diverse. To some extent, these demographic trends are playing out differently in America’s urban, suburban and rural communities.

These three community types are also on different paths politically. Rural counties have moved in a Republican direction and urban areas have become even more Democratic over the past two decades; the suburbs remain about evenly divided between the two parties.

Despite these demographic and political differences, people across community types have much in common. For example, they are about equally likely to say they are attached to their communities, and they share some of the same concerns about issues in their areas.

Here are some key findings from a new Pew Research Center report about the attitudes and experiences of urban, suburban and rural Americans:

The growth in suburban areas since 2000 is driven by several factors. More than 6 million Americans who used to live in urban and rural counties have migrated to the suburbs, and more than 5 million international immigrants have settled there as well. While urban counties have also had an influx of international immigrants since 2000 (7 million), they have lost 5 million residents to suburban and rural areas. In contrast, in rural counties, the number that moved out to other types of communities since 2000 modestly exceeded the number that moved in. All county types saw more births than deaths during this time period. 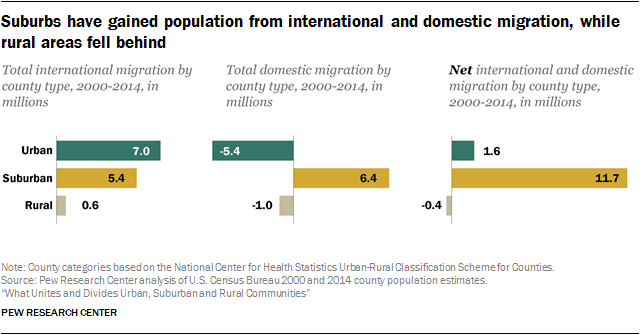 2Suburbs are aging more rapidly than urban and rural areas. Nationally and in each community type, the 65-and-older population has grown more sharply since 2000 than any other age group. But while older adults are a higher share of the population in rural areas, suburban counties have seen the largest increase. The 65-and-older population has grown 39% in the suburbs since 2000, compared with 26% in urban and 22% in rural counties. 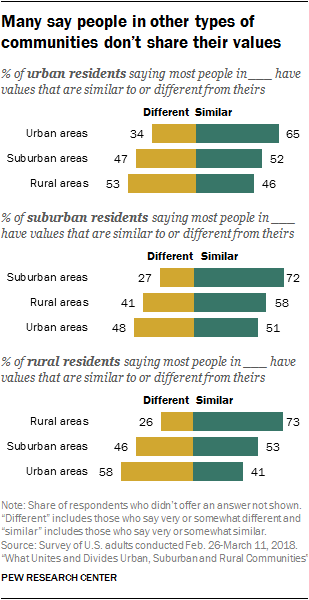 A majority of rural residents perceive an urban-rural divide over values. About six-in-ten rural residents (58%) say the values of urban dwellers are very or somewhat different from theirs, while about half (53%) of urban residents say those in rural areas have values that don’t align with theirs.

There is a clear political dimension to this perceived values gap. Most Republicans and Republican-leaning independents in urban (64%) and suburban (78%) communities say people in rural areas share their values, while Democrats and Democratic-leaning independents in these communities see a values divide with those in rural areas. On the other hand, Democrats in suburban and rural areas are far more likely than their Republican counterparts to say urban residents share their values. 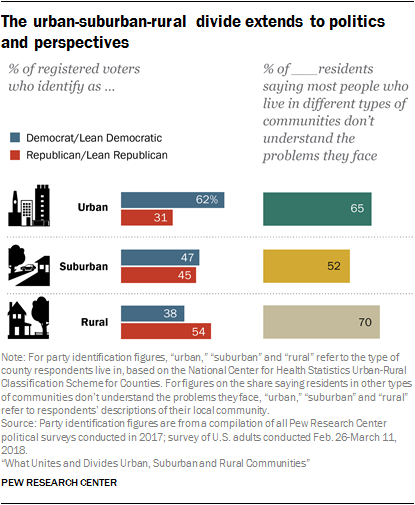 Urban and rural Americans have widely different views on some social and political issues, but differences can shrink when accounting for partisanship. People in urban areas are far more likely than those in rural communities to say abortion should be legal in all or most cases, that the government should do more to solve problems, that the economic system unfairly favors powerful interests and that whites benefit from advantages in society that black people do not have – but these differences shrink when accounting for partisanship. (A 62% majority of urban adults are Democrats or lean Democratic, while 54% in rural areas identify with or lean toward the Republican Party.)

On other issues, differences across community types remain even after taking partisanship into account. Rural Republicans are more likely than Republicans in urban areas to say the legalization of same-sex marriage is a bad thing for society, and they are also more likely to express very positive views of President Donald Trump. Democrats in urban and suburban areas are more likely than their rural counterparts to say the growing number of immigrants strengthens American society. 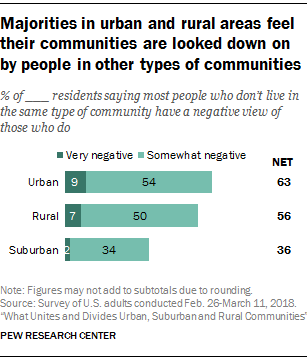 Majorities in urban and rural areas feel misunderstood by those living in different types of communities. About two-thirds or more in rural and urban areas (70% and 65%, respectively) say people who don’t live in their same type of community don’t understand the types of problems faced by those who do. The share of suburbanites who say this is lower (52%). 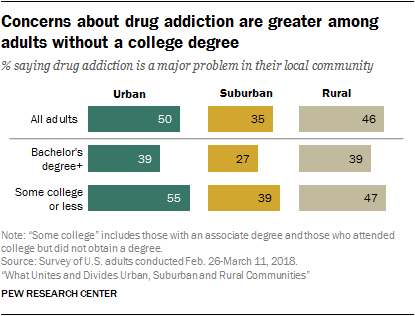 Other problems are felt more strongly in one particular community type than others. Rural residents, for instance, are more likely to say the availability of jobs and access to public transportation and to high-speed internet are major problems in their area. Urban residents, on the other hand, express greater concern about the availability of affordable housing, poverty, crime and the quality of K-12 public schools.

7A majority of Americans (59%) feel some attachment to their local community, but only 16% feel very attached. Nearly identical shares of residents in urban, suburban and rural areas feel a sense of attachment to their local community. Across community types, those who have lived in their area for more than a decade and who have made connections with their neighbors are most likely to feel a sense of attachment. 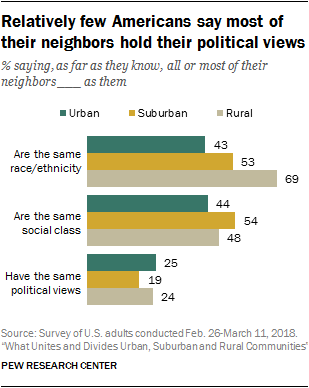 Perceptions of neighborhood composition along these lines vary somewhat by community type. The largest gap can be seen on perceptions of neighbors’ racial and ethnic backgrounds: Roughly seven-in-ten rural residents (69%) say all or most of their neighbors are the same race or ethnicity as them; significantly fewer suburban (53%) and urban (43%) adults say the same. 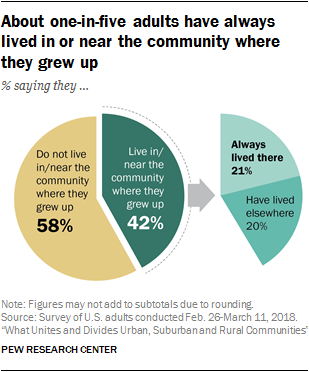 Among those who live in or near the community where they grew up, being near family tops the list as a main reason why they chose to stay (35%) or return (42%). Quality of life was the next most frequent reason, followed by answers related to jobs and comfort or familiarity.

The changing face of Congress in 8 charts