President Donald Trump has frequently criticized America’s trade deficit with China, and in recent weeks he has threatened to impose tariffs on Chinese products as a means of reducing that imbalance.

Trump’s emphasis on Beijing is hardly surprising: The United States runs a far larger merchandise trade deficit with China than with any other nation. But when the trade deficit is measured in other ways – including on a per capita basis – the U.S. actually has a larger imbalance with countries other than China.

In 2017, the U.S. merchandise trade deficit with China was $375.2 billion, up from $367.3 billion in 2015, according to U.S. Census Bureau data. (When trade in services is included, the imbalance shrinks a bit. Trump, however, has mainly directed his criticism at the deficit in autos, electronics and other such goods, reflecting his concern about the fate of the U.S. manufacturing economy.)

But there are other ways to look at trade imbalances that take into consideration the population of America’s trading partners and the size of their economies. This perspective puts the trade numbers in a slightly different light. 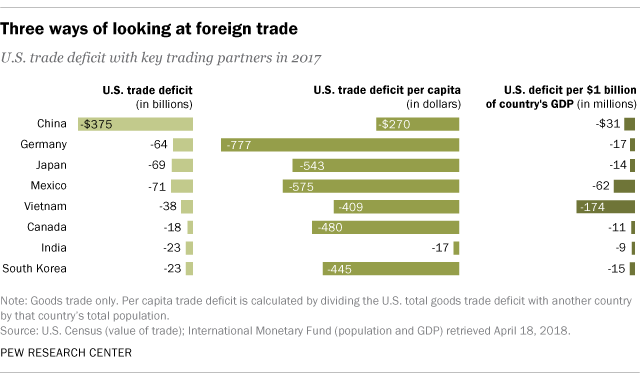 A trading partner’s commercial relationship with the U.S. is also a function of the size of that nation’s economy, with smaller economies often generating huge trade advantages relative to the size of their gross domestic product (GDP).

Vietnam’s GDP was only $220 billion in 2017, according to an International Monetary Fund estimate, while its merchandise trade surplus with the U.S. was $38.3 billion. This means that every billion dollars of Vietnam’s economy generated a $174 million trade advantage with the U.S.

Such comparison of the size of the U.S. trade imbalance with individual countries based on the size of their economies also highlights notable disparities. In 2017, South Korea’s GDP was roughly a third that of Japan’s. Yet South Korea and Japan generated roughly similar trade advantages with the U.S. per billion dollars of their GDP.