U.S. fathers today are spending more time caring for their children than they did a half-century ago. Still, most (63%) say they spend too little time with their kids and a much smaller share (36%) say they spend the right amount of time with them, according to a Pew Research Center survey conducted in August and September 2017.

Moms, by comparison, still do more of the child care and are more likely than dads to say they are satisfied with the amount of time they spend with their kids. About half (53%) say this, while only 35% say they spend too little time with their children, according to the survey.

Education is not a factor when it comes to the share of mothers who say they spend too little time with their children, but employment status is: 43% of full-time working moms say they don’t spend enough time with their kids, compared with 28% of moms who work part time or who are not employed. 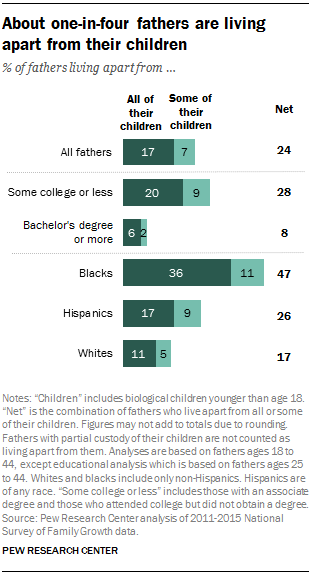 Education is strongly linked to the likelihood that a dad will be living apart from his children. Fathers who lack a four-year college degree are especially likely to be living apart from their kids: 28% in this group are, compared with just 8% of fathers with a bachelor’s degree or more education.