While Muslims born in the United States and their immigrant counterparts share a pride in being American, U.S.-born Muslims are less likely than immigrants to feel comfortable with their place in broader American society.

Muslim immigrants and those born in the U.S. both overwhelmingly express pride in their national identity. About nine-in-ten U.S.-born (90%) and foreign-born (93%) Muslims say they are proud to be American, according to a 2017 Pew Research Center survey.

Like the larger American public, majorities of both U.S.-born Muslims and Muslim American immigrants say they believe people who want to get ahead can do so with hard work (65% and 73% respectively). Roughly six-in-ten of all Americans (62%) share this belief. 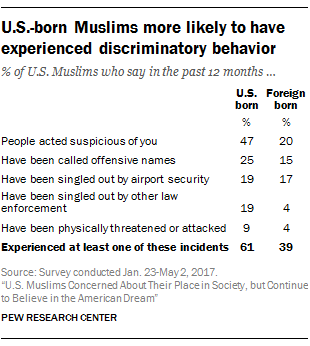 And U.S.-born Muslims are more likely than their immigrant counterparts to say there is discrimination against Muslims, and to say they have personally experienced at least one of several specific types of discrimination, such as people acting suspicious of them or calling them offensive names, being singled out by airport security or by some other law enforcement, or being physically attacked or threatened.

The same holds for views on President Trump. Large majorities of U.S. Muslims say that Trump is unfriendly toward Muslims, but U.S.-born Muslims are more likely to hold this view (85% vs. 67%). 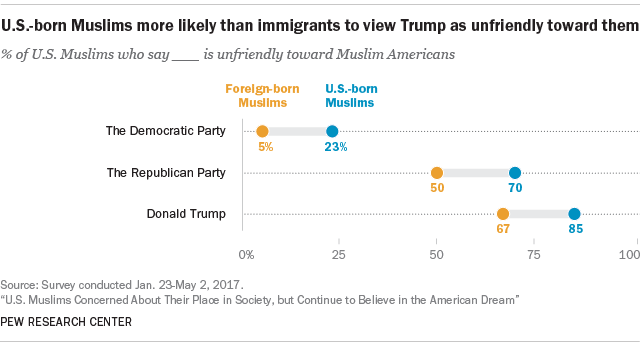 1
What the data says about gun deaths in the U.S.
2
Key facts about Americans and guns
3
Political Typology Quiz
4
The demographics of gun ownership
5
Amid a Series of Mass Shootings in the U.S., Gun Policy Remains Deeply Divisive