Nearly all Muslim Americans (97%) say they take pride in being a member of the Islamic faith. But their devotion to core religious beliefs and practices is only part of a religious identity that also includes concerns about social justice and the environment. 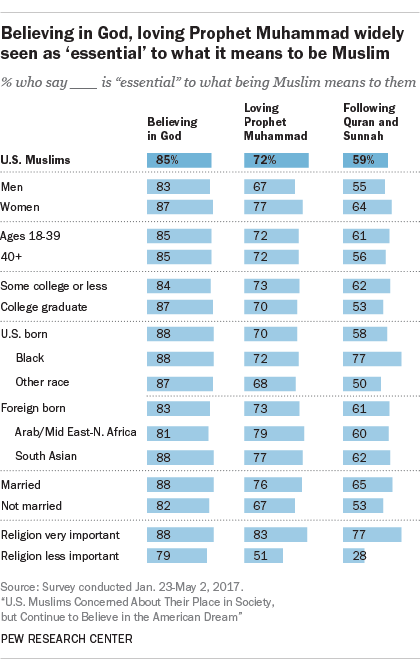 By comparison, the vast majority of American Christians also said believing in God is essential to their religious identity (86%), according to a 2014 Pew Research Center survey. And an additional 10% of U.S. Christians said this belief is important (though not essential) to what being Christian means to them.

For many, being Muslim also is tied to love for the Prophet Muhammad (72% say this is essential to what being Muslim means to them). About six-in-ten consider as essential the commitment to observe the religious teachings in the Quran and Sunnah (59%), two important sources of guidance for the Islamic faithful.

In addition to these core religious beliefs, 69% of U.S. Muslims also put a premium on working for justice and equality in society, and 62% consider it essential to safeguard the environment. The importance of the environment is even more prominent among those who say religion is very important in their lives; 68% of this group say protecting the environment is essential to their Muslim identity, compared with only half (51%) of those who say religion is less important to them. 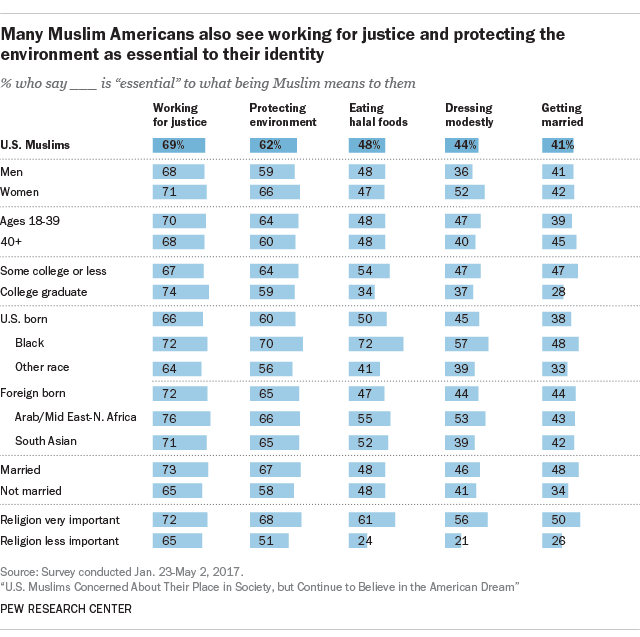 About half (48%) of U.S. Muslims say eating halal (religiously sanctioned) food is essential to their religious identity, and 44% say the same about dressing modestly. Modest dress is more important to women (52%) than men (36%).

While American Muslims express great attachment to their own identity, many do not see their Muslim and American identities as being mutually exclusive. In fact, six-in-ten U.S. Muslims say they have “a lot in common with most Americans.”