A new Pew Research Center survey finds that harassment is a common feature of online life for many adults. Most Americans say that such harassment is a major problem, and many look to a host of institutions – such as online companies and law enforcement – to curtail online abuse.

Here are nine key takeaways from the report: 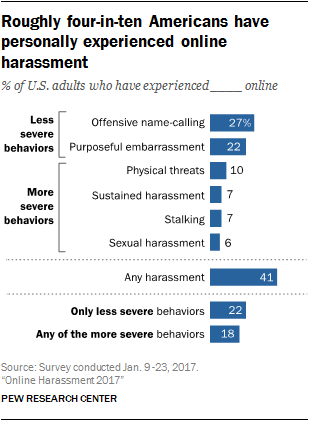 Around four-in-ten U.S. adults (41%) have experienced some form of online harassment, and an even larger share – 66% – have seen this happen to others. Pew Research Center measured online harassment by asking respondents if they had personally experienced at least one of six types of behavior online: Offensive name-calling, purposeful embarrassment, physical threats, harassment over a sustained period of time, sexual harassment or stalking. Overall, 41% of U.S. adults say they have been the target of at least one of these harassing behaviors online, representing a modest increase from 2014, when 35% of Americans said they had been harassed online.

Witnessing online harassment is an even more common aspect of digital life: Two-thirds of Americans say they have witnessed others being harassed online, according to the new survey.

Political views, physical appearance, gender and race are among the top reasons people say they are harassed online. Some 14% of Americans – representing 35% of those who have encountered any type of harassment online – say they have been the target of online harassment because of their political views. Democrats and Republicans are equally likely to say this. Among other reasons people have been harassed online, around one-in-ten U.S. adults cite their physical appearance (9%), while 8% each say they were targeted because of their gender or their race or ethnicity. Smaller shares cited religion, sexual orientation, occupation or disability status as reasons. 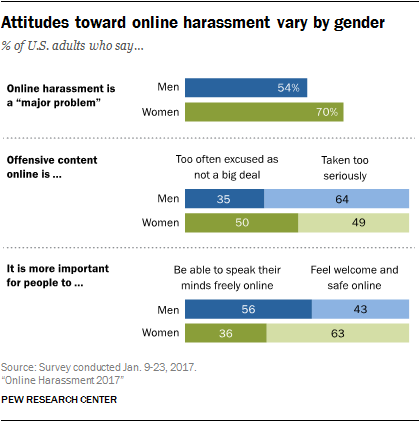 Americans’ views about the balance between online safe spaces and free speech tend to vary by gender. Men are more likely than women to say that it is more important for people to be able to speak their minds freely online (56% vs. 36%), while women are more inclined than men to say it is more important for people to feel welcome and safe in online spaces (63% vs. 43%).

6A majority of Americans view online harassment as a major problem, and many look to online companies to address this type of abuse. Roughly six-in-ten Americans (62%) say online harassment is a “major problem,” while a similar share (64%) say that online platforms should play a “major role” in addressing it. Furthermore, roughly eight-in-ten Americans (79%) say online services have a duty to step in when harassment occurs on their platforms; just 15% say that these services should not be held responsible for the behavior and content of its users. 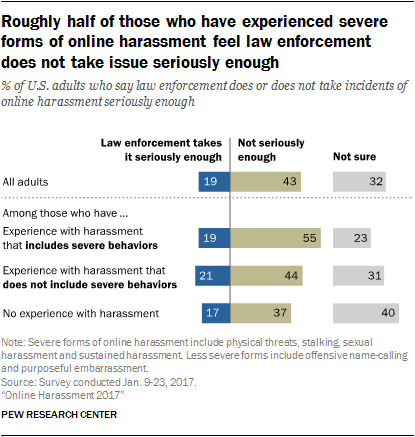 8A large majority of the public says anonymity is a key factor in online harassment. Nearly nine-in-ten Americans (89%) say the ability to post anonymously enables people to be cruel or harass one another. Among those who have been harassed online, 54% say their most recent incident involved a stranger or someone whose real identity they didn’t know. And the vast majority of Americans (86%) agree the internet makes it easier for people to remain anonymous. 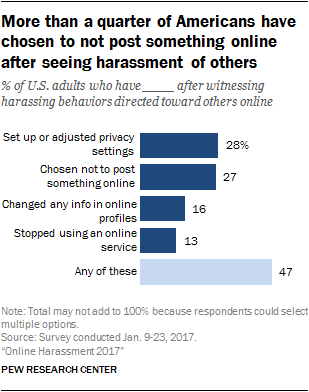 Witnessing online harassment has led some bystanders to change their online behavior. Roughly one-quarter of Americans (27%) say they have chosen not to post something after witnessing online harassment, while a similar share (28%) say they adjusted their privacy settings after seeing this type of online behavior. Some users report going a step further: 13% of U.S. adults have stopped using an online service altogether after seeing others being harassed.

For more: Read a Q&A about how and why we conducted the survey with its author, Maeve Duggan.

1
What the data says about gun deaths in the U.S.
2
The demographics of gun ownership
3
Amid a Series of Mass Shootings in the U.S., Gun Policy Remains Deeply Divisive
4
Key facts about Americans and guns
5
Political Typology Quiz
6
Defining generations: Where Millennials end and Generation Z begins