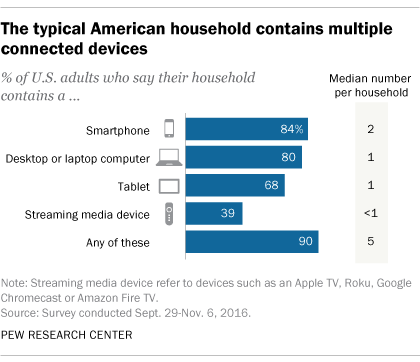 For the first time, more than half of all households in the U.S. contain a cellphone but not a landline telephone, according to a new survey from the Centers for Disease Control and Prevention. The growing prevalence of cellphones comes as the typical American household now contains a wide range of connected devices. 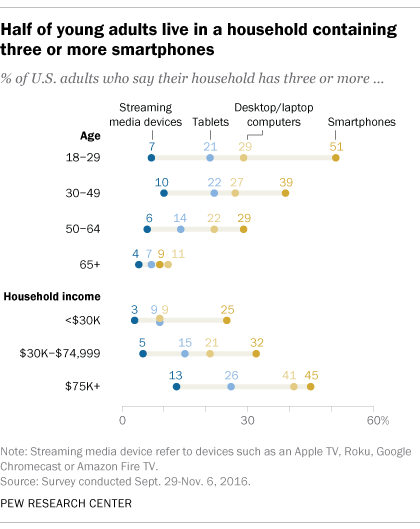 Younger adults and relatively affluent Americans tend to live in households with large numbers of connected devices, and this is especially true when it comes to smartphones. Some 96% of 18- to 29-year-olds live in a household with at least one smartphone, and 51% of young adults indicate that their home contains three or more smartphones.

Even so, many older adults also reside in households with multiple mobile devices. Nearly four-in-ten 30- to 49-year-olds (39%) and 29% of 50- to 64-year-olds say their home contains three or more smartphones. In total, the typical (median) 18- to 29-year-old lives in a household with six of these connected devices – a figure that is comparable to the median figure among those ages 30-49 (six) and 50-64 (five).

Higher-income Americans are about twice as likely as those who are lower income to say their household has three or more smartphones (45% vs. 25%). But affluent Americans also stand out in comparison with lower-income households when it comes to traditional computers and tablets. Four-in-ten Americans with an annual household income of $75,000 or more (41%) say they have three or more computers in their home, compared with 9% of those whose household income is $30,000 or less. And 26% of these higher-income Americans say their home contains three or more tablets, compared with 9% of those earning $30,000 a year or less.

Census: Computer ownership, internet connection varies widely across U.S.
10 facts about smartphones as the iPhone turns 10
Smartphone, computer or tablet? 36% of Americans own all three
Digital divide persists even as lower-income Americans make gains in tech adoption
Ways to connect digital devices increase -- for those who have more than one
Trump used his clemency power sparingly despite a raft of late pardons and commutations
Biden Begins Presidency With Positive Ratings; Trump Departs With Lowest-Ever Job Mark
Almost all U.S. presidents, including Trump, have been Christians
How we know the drop in Trump’s approval rating in January reflected a real shift in public opinion
What Biden and Trump voters say they want the other candidate’s supporters to know about them