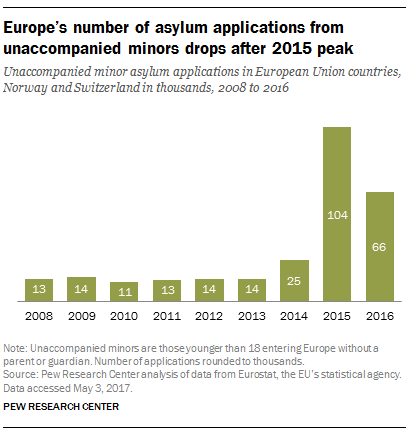 The European Union, Norway and Switzerland received nearly 66,000 asylum applications from unaccompanied minor migrants in 2016, a decline of nearly 40% from 2015’s record total but still well above the total of prior years, according to a new Pew Research Center analysis of data from Eurostat, the EU’s statistical agency.

The asylum application data in this analysis do not represent the total number of refugees who move to Europe in a given year. Applications may not equal the number of applicants because some people may apply in multiple countries. Some asylum seekers also may arrive in a year prior to when they file their application. In addition, many are not successfully granted refugee status and are not allowed to remain in Europe.

In 2016, Afghanistan was the most common origin country for unaccompanied minors seeking asylum in the EU, Norway and Switzerland, with about 24,000 applications. The other top origins were Syria (about 12,000), Iraq (more than 4,000), Eritrea (between 3,000 and 4,000) and Somalia (about 3,000). From 2008 to 2016, Afghanistan accounted for more than 100,000 European asylum applications from unaccompanied minors, making it the single largest country of origin.

Germany received the most applications for asylum from unaccompanied minors in 2016, with nearly 36,000 (55% of all such applications received by the EU, Norway and Switzerland). Italy was second with more than 6,000.

Statistics on the success rates of asylum applications by unaccompanied minors are not available from Eurostat. But among all asylum seekers to Europe, some of the highest success rates in 2016 were among Syrians, Afghans and Iraqis. By contrast, asylum seekers from the non-EU countries of Albania, Serbia and Kosovo have considerably lower success rates. In response to concerns about child migrants, the EU Commission recently encouraged member states to seek stronger protections for child migrants, particularly for unaccompanied minors.