For the analysis – which covers the period from 1991 to 2010 and includes comparisons with changes in the United States – “middle-class” or “middle-income” adults in a country are those who live in households with disposable (after-tax) incomes ranging from two-thirds to double the country’s median disposable household income. Thus, the income it takes to be middle class varies across countries. Also, estimates in the new report will not match those in the Center’s previous reports, which were based on a household’s gross (pretax) income.

Here are seven key findings in the new report: 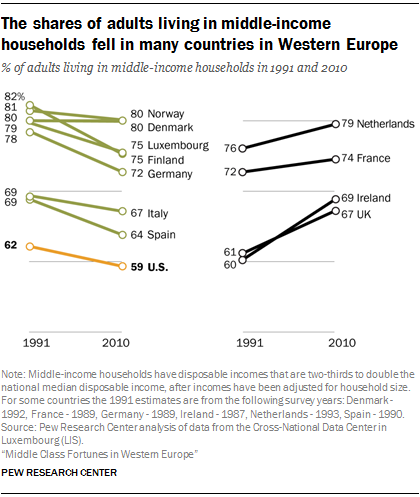 Among Western Europe’s six largest economies, the shares of adults living in middle-income households increased in France, the Netherlands and the United Kingdom, but they shrank in Germany, Italy and Spain. From 1991 to 2010, the middle-class share in the UK increased from 61% to 67%, but it decreased from 78% to 72% in Germany. Among the 11 Western European countries examined, the expansion in the UK was second only to the increase in Ireland, where the share increased from 60% in 1991 to 69% in 2010. The decrease in Germany was the second largest after Finland, where the middle-class share fell from 82% to 75% over the same period. Overall, the middle-class share of the adult population fell in seven of the 11 Western European countries examined, mirroring the long-term shrinking of the middle class in the U.S.

2In most countries studied, decreasing shares of middle-income populations led to rising shares of adults in lower- and upper-income tiers. These shifts signal a sharpening of economic divisions among households in many Western European countries and the U.S. However, there is also a general improvement in the economic status of adults because the movement up the income ladder was greater than the movement downward in most countries from 1991 to 2010. 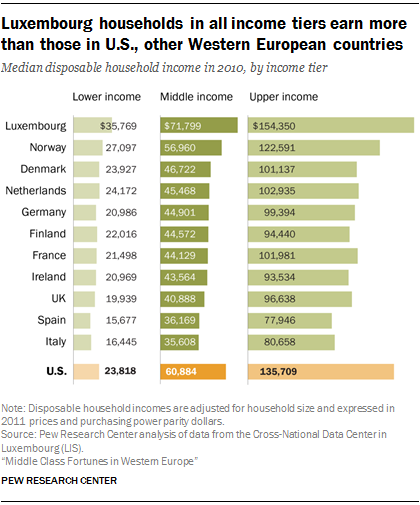 Incomes of middle-class households in the U.S. are greater than the incomes of most Western European middle classes. Financially, the American middle class is ahead of the middle classes in the Western European nations in terms of disposable (after-tax) household income, with the exception of Luxembourg. Middle-income households in Luxembourg lived on $71,799 annually in 2010, at the median, followed by $60,884 in the U.S. The middle class in Italy lived on a median income of $35,608, the most modest means among the countries analyzed. But lower-income Americans are at the middle of the pack in terms of earnings, lagging behind or barely matching lower-income adults in Luxembourg, Norway, the Netherlands and Denmark. (Incomes are adjusted for household size, scaled to a household size of three, and expressed in 2011 prices and purchasing power parities; see the report’s Methodology section for more.) 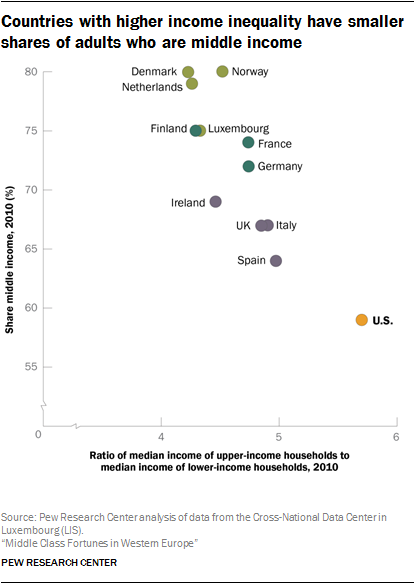