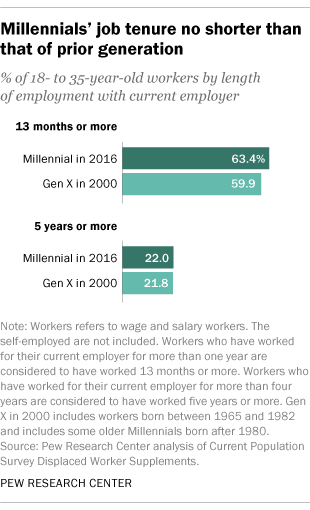 Millennial workers, those ages 18 to 35, are just as likely to stick with their employers as their older counterparts in Generation X were when they were young adults, according to recently released government data.

And among the college-educated, Millennials have longer track records with their employers than Generation X workers did in 2000 when they were the same age as today’s Millennials.

Every two years the U.S. Department of Labor collects data on how long workers have been with their current employer as part of the Current Population Survey. Though the data have been collected periodically since the early 1950s, the present tenure questions began in 1996, so we can only compare Millennial workers with Gen X workers when they were the same age.

One factor that may be contributing to Millennials staying with employers longer is their relatively high levels of education, which is typically associated with longer tenure. Among 25- to 35-year-old workers in 2016, 38% of Millennial men and 46% of Millennial women had completed at least a bachelor’s degree. The Gen X workforce back in 2000 had significantly lower levels of educational attainment: 31% of male 25- to 35-year-old workers had finished college, as had only 34% of female workers.

The increasing job tenure of college-educated Millennials is consistent with a decline in employer switching among all working-age adults since the 1980s. The reasons for the decline are not well understood. Recent research indicates that the rise of dual-career households, the decline in middle-skill jobs, occupational licensing and the need for employees to retain health insurance cannot account for much of the decline in job-switching.

The longer tenure of college-educated Millennials compared with that of Gen X workers does not necessarily translate into higher wages or more job security. They may be sticking with their current employers due to a dearth of opportunities to get a better job with a different employer. But, in any event, their reported tenure makes clear that the “job-hopping Millennial” characterization does not fit the broad Millennial workforce.

The trend is different among less-educated young adults. For example, among Millennials with a high school education, 70% of men and 69% of women had been with their employer at least 13 months. These proportions are similar to their high-school-educated counterparts among today’s Gen Xers in 2000 (72% for men and 71% for women).