After a period of steady growth, the number of inmates held in private prisons in the United States has declined modestly in recent years and continues to represent a small share of the nation’s total prison population. 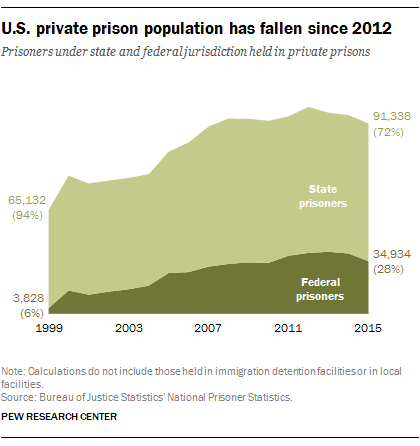 In 2015, the most recent year for which data are available, about 126,000 prisoners were held in privately operated facilities under the jurisdiction of 29 states and the federal Bureau of Prisons. That’s an 83% increase since 1999, the first year with comparable data, according to the Bureau of Justice Statistics (BJS). By comparison, the total U.S. prison population increased 12% during that span.

For the purposes of this analysis, the prison population refers to inmates under the jurisdiction of state and federal authorities. That definition means state or federal authorities have the legal authority over a prisoner, regardless of where the prisoner is physically being held. This analysis excludes inmates held in local facilities, such as county jails, as well as those held in federal detention facilities for unauthorized immigrants, which are also sometimes privately operated. In addition, some states do not use private prisons.

Since 1999 – the first year BJS began collecting data on private prisons – inmates in privately run facilities have made up a small share of all U.S. prisoners. In 2015, just 8% of the nearly 1.53 million state and federal prisoners in the U.S. were in private facilities, up slightly from 5% in 1999. 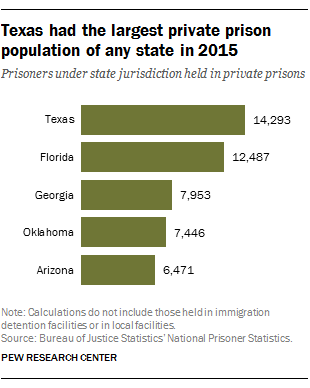 The U.S. private prison industry was established in the 1980s and gained steam in the 1990s as policymakers grappled with how to respond to strains on the penal system, including rapid growth in prison populations and increased prison spending. Private prisons were touted as an efficient and cost-effective solution.

Several companies began providing correctional services at the state level starting in the 1980s, and at the federal level starting in the late 1990s. (Private contractors also run many immigration detention facilities, which are under the jurisdiction of the Department of Homeland Security’s Immigration and Customs Enforcement. These facilities are not included in the BJS calculations.)

In February, Attorney General Jeff Sessions reversed a directive from the Obama administration to phase out work with private prisons at the federal level. The original Obama directive was motivated by a 2016 audit, which found that federal “contract” prisons had more safety and security incidents than comparable government-run prisons.

Correction: The chart “U.S. private prison population has fallen since 2012” has been corrected to credit Bureau of Justice Statistics’ National Prisoner Statistics as the source.