As marriage rates have fallen, the number of U.S. adults in cohabiting relationships has continued to climb, reaching about 18 million in 2016. This is up 29% since 2007, when 14 million adults were cohabiting, according to U.S. Census Bureau data.

Roughly half of cohabiters – those living with an unmarried partner – are younger than 35. But an increasing number of Americans ages 50 and older are in cohabiting relationships, according to a new Pew Research Center analysis of the Current Population Survey. In fact, cohabiters ages 50 and older represented about a quarter (23%) of all cohabiting adults in 2016. 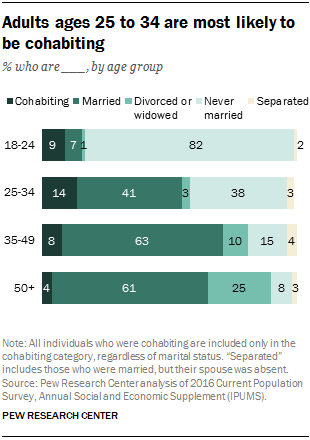 The rising number of cohabiters ages 50 and older coincides with rising divorce rates among this group. With the higher divorce rates and a growing share of people who have never been married in this age group, more individuals are unmarried and available for partnering or re-partnering. In 2016, 61% of adults ages 50 and older were married, compared with 64% in 1990.