The issue of paid family and medical leave has captured the attention of policymakers and advocates on both sides of the political aisle, as a growing share of working parents and an aging population put mounting pressure on American workers to balance family caregiving responsibilities and work obligations. A new Pew Research Center study finds that large shares of adults express support for paid family and medical leave, and most supporters say employers should cover the costs. Still, about half of Americans say the federal government should require employers to provide this benefit.

These findings are based on two new surveys of randomly selected U.S. adults conducted by Pew Research Center with support from Pivotal Ventures: one of adults in general, and the other of those ages 18 to 70 who were employed for pay and have taken – or who needed or wanted but were unable to take – parental, family or medical leave in the past two years.

The study also finds that the experiences of Americans who have taken family or medical leave in recent years – including the amount of time they took off, whether they received pay, and how they coped with the loss of wages and salary if they didn’t receive full pay during their leave – vary sharply by income. 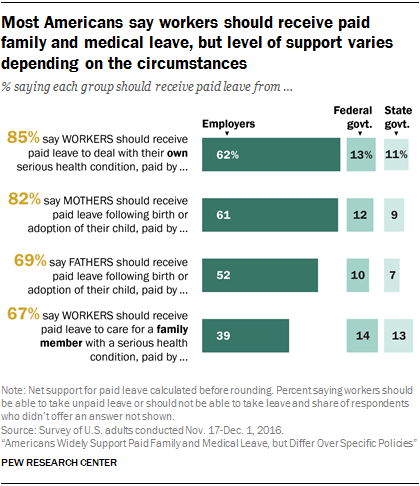 More Americans say that employers, rather than the federal or state government, should be responsible for providing pay for workers who take leave. For example, roughly six-in-ten adults say employers should provide pay for workers who need to deal with their own serious health condition (62%) and for mothers following birth or adoption (61%). 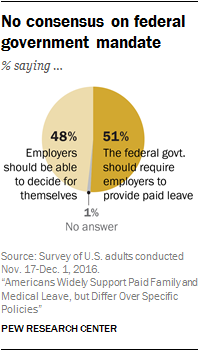 When it comes to specific policies for the government to deal with employees who need to take time off from work for family or medical reasons, the public has more positive views of policies that incentivize employers versus those that establish a government fund. Roughly four-in-ten or more Americans say they strongly favor providing tax credits to employers that provide paid leave (45%) or allowing workers to set aside monthly pretax contributions into a personal account that can be withdrawn when they need to take leave (39%). About three-in-ten (28%) strongly favor providing paid leave through new or higher taxes on the wealthy or corporations, and about a quarter (24%) strongly support the establishment of a government fund for employers and employees to pay into through payroll contributions that would then provide paid leave to workers who needed it. 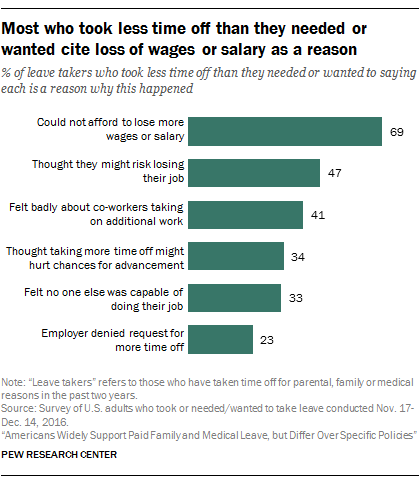 Blacks and Hispanics, those without a bachelor’s degree and those with annual household incomes under $30,000 are more likely than whites and those with more education or higher incomes to say they weren’t able to take leave when they needed or wanted to. 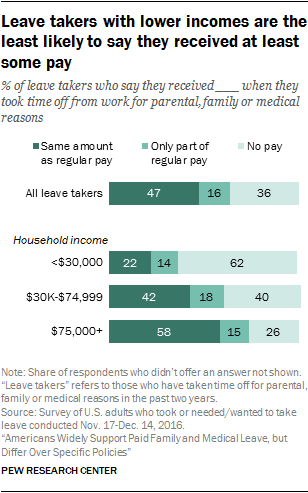 Among leave takers who received at least some pay, most (79%) say that at least part of that pay came from vacation days, sick leave or paid time off that they had earned. And roughly one-in-five say they used temporary or short-term disability insurance provided by their employer (22%) or family or medical leave benefits paid by the employer (20%) for at least part of their pay. 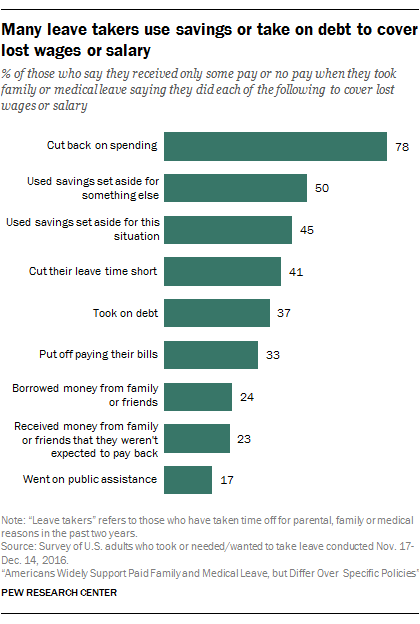 5To cover lost wages, many leave takers take on debt or use savings. About eight-in-ten leave takers (78%) who took unpaid or partially paid family or medical leave say they cut back on their spending to compensate for lost wages or salary. Substantial shares also say they used savings set aside for something else (50%), used savings set aside for the reason they took leave (45%), cut their leave short (41%) or took on debt (37%). A third say they put off paying bills and about a quarter say they borrowed money from family or friends (24%) or received money they weren’t expected to pay back (23%). Nearly one-in-five (17%) say they went on public assistance to cover the lost wages or salary.