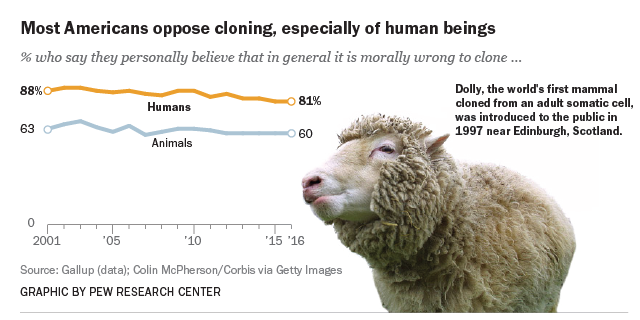 Twenty years ago today, the world’s first clone made from the cells of an adult mammal made her public debut. Dolly, a Finn Dorset sheep, was introduced to the public in 1997 after scientists at the Roslin Institute at the University of Edinburgh in Scotland implanted the cell nucleus from a sheep into an egg that was subsequently fertilized to create a clone.

On the anniversary of Dolly’s unveiling, here are five noteworthy findings about cloning and public opinion:

1 No one has ever cloned a human being, though scientists have cloned animals other than Dolly, including dogs, pigs, cows, horses and cats. Part of the reason is that cloning can introduce profound genetic errors, which can result in early and painful death. At the same time, labs in a variety of countries have successfully cloned human embryos for the purpose of producing stem cells that can be used in medical therapies.

3 Americans are divided as to whether humans will be cloned in the near future. In a 2010 Pew Research Center survey, 48% of adults said that a human being would definitely or probably be cloned by 2050, compared with 49% who said such an event would not happen.

4 The public is divided about the prospect of using cloning to bring back to life species of animals that are currently extinct, such as the carrier pigeon or even the woolly mammoth. While bringing back dinosaurs, à la Jurassic Park, might not possible due to the fact that dinosaurs have been dead for tens of millions of years, scientists could conceivably use fresher tissue samples to bring back more recently extinct species. In a 2013 Pew Research Center poll, half of all adults surveyed (50%) said that by 2050 researchers will be able to use cloning to bring back extinct species, with 48% predicting such a development won’t occur.

5 Fewer Americans are concerned with cloning animals than with the prospect of cloning humans, according to the same 2016 Gallup survey. Still, a majority of adults (60%) say cloning animals like Dolly is morally wrong, compared with 34% who say it’s morally acceptable. Since 2001, there has been little to no change in these numbers.