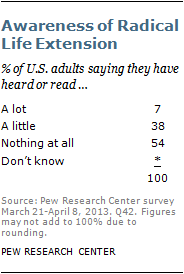 Most Americans have heard little or nothing about biomedical advances that, according to some researchers, hold the potential to allow the average person to live decades longer. Just 7% of U.S. adults report having heard or read a lot about this possibility, which medical researchers and bioethicists call radical life extension. Nearly four-in-ten Americans (38%) say they have heard or read a little about this subject, but the majority of those surveyed (54%) say they have heard nothing about it.

At this early stage, Americans on the whole are both ambivalent and skeptical about dramatic increases in longevity. Asked about the societal impact of “new medical treatments” that would “slow the aging process and allow the average person to live decades longer, to at least 120 years old,” about half (51%) of the general public says the treatments would be a bad thing for society, while 41% say they would be a good thing. 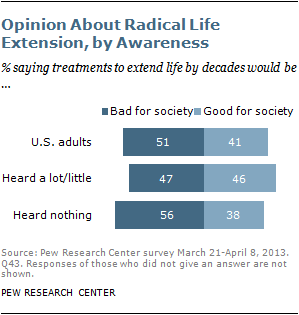 Those who have heard at least a little about radical life extension are closely divided in their views: 46% say such treatments would be a good thing for society, and 47% say they would be a bad thing. Those who have heard nothing about it prior to the survey interview are more inclined to see radical life extension as a bad thing (56%) than a good thing (38%) for society.

Opinions about the possible impact of radical life extension on society tend to vary by age, race and ethnicity. Blacks and Hispanics are more likely than whites to see dramatically longer life spans as a positive development for society. And younger adults (ages 18 to 49) are more inclined than older generations to say that radical life extension would be a good thing for society.

But there are only modest differences across education and income groups, with those who have less formal education and lower incomes being somewhat more inclined to say that radical life extension would be a good thing for society.

Personal Interest in Having Treatments To Live Much Longer 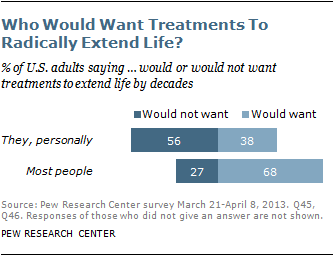 When asked whether they, personally, would want medical treatments that slow the aging process and allow them to live decades longer, to at least 120 years old, about four-in-ten U.S. adults (38%) say they would, while more than half (56%) say they would not. By contrast, about seven-in-ten (68%) speculate that most people would want such treatments, while roughly a quarter (27%) say most people would not want them.

There are also modest differences by age: Adults ages 50 and older are less likely than younger Americans to say they would want treatments to radically increase their longevity (34% vs. 42%).

Differences by education level are not statistically significant.

Americans hold a range of beliefs about the societal implications of medical treatments to slow the aging process and increase average life expectancy by decades. About eight-in-ten U.S. adults (79%) agree that these kinds of treatments should be available to everyone who wants them. At the same time, two-thirds (66%) expect that only wealthy people actually would have access to these treatments. 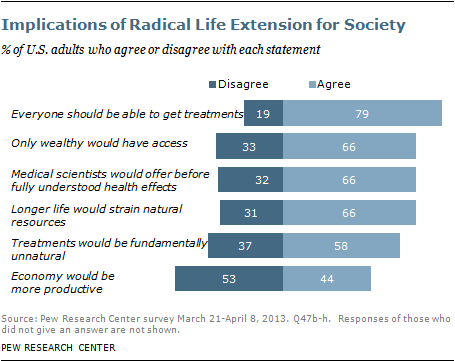 Two-thirds also think that medical scientists would offer the treatments before they fully understood the health effects and that longer life expectancies would strain natural resources. In addition, a majority of adults surveyed (58%) say that “these treatments would be fundamentally unnatural.” But public opinion is more closely divided when it comes to the effect of radical life extension on the economy; 44% say that “our economy would be more productive because people could work longer,” while 53% disagree.

Beliefs about these specific implications go hand-in-hand with assessments of the overall impact of longer life spans on society. For example, people who think that radically life-extending medical treatments would be a good thing for society are more likely to agree that everyone should have access to them – and less likely to view them as fundamentally unnatural. 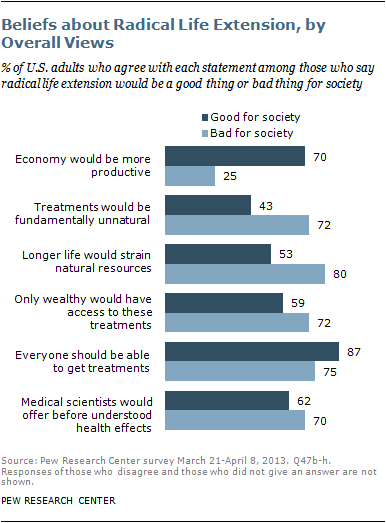 Expectations for the future also are closely tied to overall views about the effect of radical life extension on society. Those who say that radically longer life spans would be a good thing for society are more inclined to think that by the year 2050, the average person in the U.S. will live to at least 120 (38% of this group says it definitely or probably will happen). Among those who see life extension as a bad thing, by contrast, just 16% believe this scenario will come to pass by the year 2050.

What Are the Odds? 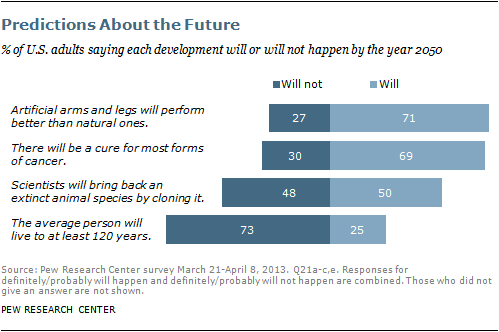 The Pew Research survey asked respondents to gauge the likelihood that four developments in science and technology will come to fruition by the year 2050.

Americans largely agree that by 2050 artificial arms and legs will perform better than natural ones (71%) and that there will be a cure for most forms of cancer (69%).

The public is almost evenly split in their predictions on whether scientists will bring back an extinct animal species by cloning it, with 50% saying this will happen by 2050 and 48% saying it will not. 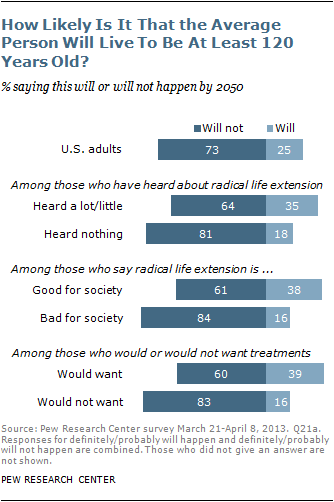 Those who have heard at least a little about medical treatments to extend life by decades are more optimistic that such a development is likely (35% say it definitely or probably will happen by 2050, compared with 18% of those who have heard nothing about the treatments). Similarly, those who say radical life extension would be good for society are more likely than those who say it would be a bad thing to think that average life expectancy will be at least 120 years by 2050 (38% vs. 16%). And those who say they personally would want such treatments are more likely than those who would not want them to predict that this scenario actually will occur by 2050 (39% vs. 16%).