The deep partisan divide that pervades much of American life extends to views about the police, according to a Pew Research Center survey of U.S. adults. Republicans and Democrats have vastly different opinions about how well police do their jobs and the realities of policing today – views that are likely linked to clear partisan splits on opinions of the Black Lives Matter movement and highly publicized fatal encounters between blacks and police in recent years. 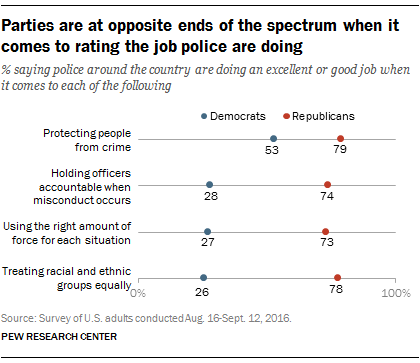 About three-quarters of Republicans say that police around the country are doing an excellent or good job when it comes to treating racial and ethnic groups equally, using the right amount of force for each situation and holding officers accountable when misconduct occurs. Only about a quarter of Democrats agree. When it comes to protecting people from crime, 79% of Republicans say police are doing an excellent or good job, compared with 53% of Democrats. Independents fall between Republicans and Democrats on these questions.

Though attitudes about police are closely linked with race, these stark differences persist even when controlling for race. For example, 76% of white Republicans say they feel police around the country are doing an excellent or good job treating racial and ethnic groups equally, compared with 27% of white Democrats – about the same difference as between all Republicans and Democrats. (The sample size for black Republicans was too small to make a party comparison among blacks.) 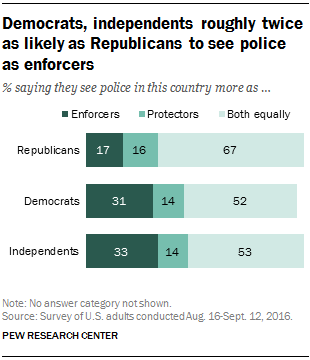 Partisans also differ in the role they see police performing. For example, about a third of Democrats (31%) and independents (33%) say they see police in this country more as enforcers than protectors, roughly double the share of Republicans who say this (17%). Republicans, for their part, are more likely to say police in this country fill both of these roles equally (67%) compared with Democrats (52%) and independents (53%).

Partisan differences also are evident on questions about the realities of policing today. For example, while majorities of each party say that being a police officer is more dangerous now than it was five years ago, Republicans (87%) are more likely than Democrats (62%) and independents (69%) to say this.

Republicans and Democrats alike believe that the average police officer discharges his or her service firearm while on duty at least once during the course of their career (84% and 86%, respectively). But Democrats (39%) are more likely than Republicans and independents (27% each) to say that an average officer uses his or her service weapon at least a few times a year. Here, however, differences do appear to be driven by race: Only 22% of white Democrats say that an average officer discharges his or her weapon at least a few times a year, which is statistically no different from the 26% of white Republicans who say this. (For their part, 72% of police officers say they have never fired their weapon on duty outside of training, a separate survey of officers found.)

10 things we know about race and policing in the U.S.
Like Americans overall, U.S. Catholics are sharply divided by party
17 striking findings from 2017
5 facts about partisan reactions to COVID-19 in the U.S.
State of the Union 2018: Americans’ views on key issues facing the nation
So far, Trump has granted clemency less frequently than any president in modern history
Biden Begins Presidency With Positive Ratings; Trump Departs With Lowest-Ever Job Mark
Almost all U.S. presidents, including Trump, have been Christians
How we know the drop in Trump’s approval rating in January reflected a real shift in public opinion
What Biden and Trump voters say they want the other candidate’s supporters to know about them