The number of Cubans entering the U.S. has spiked dramatically since President Barack Obama announced a renewal of ties with the island nation in late 2014, a Pew Research Center analysis of government data shows. The U.S. has since opened an embassy in Havana, a move supported by a large majority of Americans, and public support is growing for ending the trade embargo with Cuba. 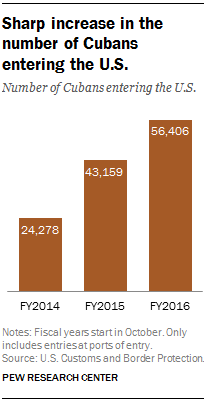 On Thursday, the White House announced its latest step in policy toward Cuba by ending a long-standing policy that treated Cubans seeking to enter the U.S. differently from other immigrants. Under the old policy, Cubans hoping to legally live in the U.S. needed only to show up at a port of entry and pass an inspection, which included a check of criminal and immigration history in the U.S. After a year in the country, they were allowed to apply for legal permanent residence. The new policy makes Cubans who attempt to enter the U.S. without a visa subject to removal, whether they arrive by sea or port of entry.

Thousands of Cubans have migrated to the U.S. by land. Many fly to Ecuador because of the country’s liberal immigration policies, then travel north through Central America and Mexico. However, as some Central American countries have closed their borders to the flow, this route has grown more difficult to travel, and a number of Cuban immigrants have been stranded on their way to the U.S.

The majority of Cubans who have entered the United States by land in recent years arrived through the U.S. Border Patrol’s Laredo Sector in Texas, which borders Mexico. In fiscal 2015, two-thirds (28,371) of all Cubans entering the U.S. came through this sector, an 82% increase from the previous fiscal year. In fiscal 2016, the Laredo Sector continued to receive the majority (64%) of Cuban migrants entering the U.S. through a port of entry. Fiscal 2016 also saw a major spike in El Paso, where 5,179 Cubans entered, up from only 698 Cubans in fiscal 2015. 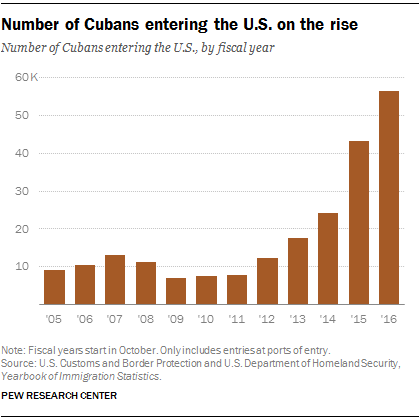 Not all Cubans who attempted to enter the U.S. made it. Under previous U.S. policy, Cubans caught trying to reach the U.S. by sea were returned to Cuba or, if they cited fear of prosecution, to a third country. In fiscal 2016, the U.S. Coast Guard apprehended 5,263 Cubans at sea, the highest number of any country. The total exceeds the 3,505 Cubans apprehended in fiscal 2015.

There are 2 million Hispanics of Cuban ancestry living in the U.S. today, the fourth largest Hispanic origin group behind Mexicans, Puerto Ricans and Salvadorans. But population growth for this group is now being driven by Cuban Americans born in the U.S. The share of foreign born among Cubans in the U.S. declined from 68% in 2000 to 57% as of 2015.

Note: This is an updated version of a post originally published on Oct. 7, 2015.