In many parts of the world, particularly in poorer countries, attainment of even the most basic education is still far from universal. Indeed, roughly one-in-five adults (19%) around the globe have no formal schooling at all, according to a recent Pew Research Center report on education that also studied its relationship to religion.

While virtually all adults in Europe (98%) and English-speaking North America (99%) have at least some education, four-in-ten in the Middle East and North Africa (41%) and in sub-Saharan Africa (41%) have not completed even a year of primary school. 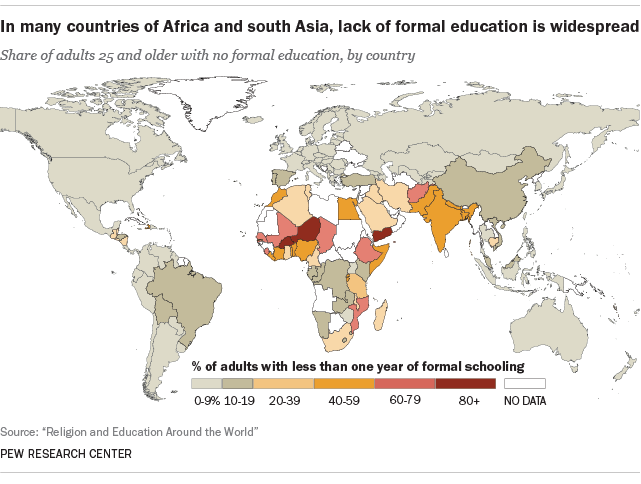 In the Asia-Pacific, the world’s most populous region, 22% of adults have no schooling. And in Latin America and the Caribbean, one-in-ten have no education.

Women are more likely to have no schooling than men. Nearly a quarter (23%) of women are uneducated, compared with 14% of the world’s men. In the least educated parts of the world (Middle East-North Africa and sub-Saharan Africa) roughly half of adult women have not been to school for even a year.

In certain countries in sub-Saharan Africa (Burkina Faso, Mali, and Niger), the share of those without education is roughly eight-in-ten or higher. The same is true for Yemen and Afghanistan. In Europe, 12% of all adults in Portugal and Spain have no schooling, the highest shares on the continent. And in the Western Hemisphere, the country with the highest share of uneducated adults is Haiti (54%).