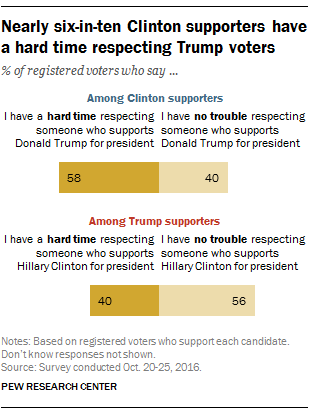 Given the rancorous tone and often highly personal nature of this year’s presidential campaign, supporters of Hillary Clinton and Donald Trump might be expected to hold similarly negative views of one another. But a new Pew Research Center survey finds that Clinton backers – particularly highly educated ones – have more difficulty respecting Trump supporters than the other way around. 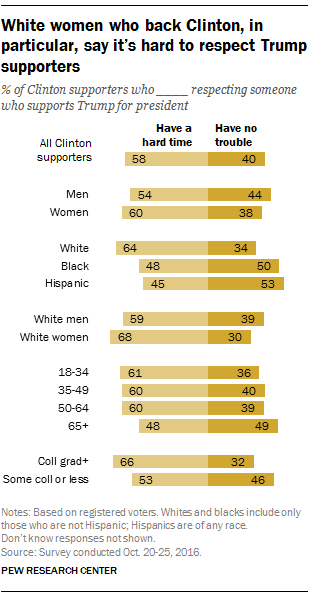 White women who back Clinton also are particularly likely to say they have difficulty respecting those who favor Trump: 68% say this, compared with a smaller share of white men (59%) and fewer nonwhites.

Among pro-Trump voters, there is little difference in these views between men and women or by education level. About four-in-ten Trump supporters in each of these groups say they have a hard time respecting someone who supports Clinton.

There is, however, an age divide among Trump backers. Trump voters ages 18-34 are less likely than older Trump supporters to say they have a hard time respecting a Clinton supporter (29% of those under 35 say this, compared with 45% of Trump backers 65 and older).

The differences in respect that Clinton and Trump supporters have for one another may be connected with voters’ perceptions of the levels of respect that the candidates themselves have for each other. The survey found that nearly nine-in-ten Clinton supporters (88%) say Trump has been “too personally critical” of the Democratic nominee during the campaign, compared with seven-in-ten Trump supporters who say the same thing about Clinton. 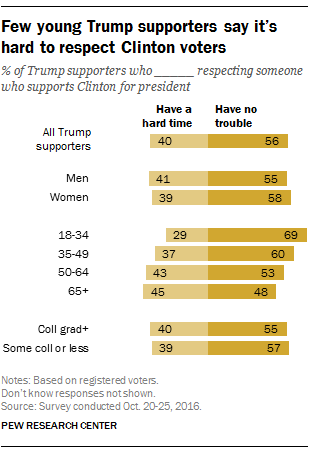 About six-in-ten voters (62%) overall say Trump has been too personally critical of his opponent – the highest share for any presidential candidate since Pew Research Center began asking the question in 1988 (though this was not asked in 1992). A substantially lower share (44%) says the same thing of Clinton, though that percentage is still higher than it was for Barack Obama during his election and re-election campaigns.

The survey of 2,583 adults, including 2,120 registered voters, was conducted Oct. 20-25, just as the contentious race for the White House entered its final two weeks and shortly after a third presidential debate that drew attention for its pointed barbs. It occurred before the FBI announced it had discovered new emails that may be related to Clinton’s use of a personal email server while serving as secretary of state.