A total of 38,901 Muslim refugees entered the U.S. in fiscal year 2016, making up almost half (46%) of the nearly 85,000 refugees who entered the country in that period, according to a Pew Research Center analysis of data from the State Department’s Refugee Processing Center. That means the U.S. has admitted the highest number of Muslim refugees of any year since data on self-reported religious affiliations first became publicly available in 2002. 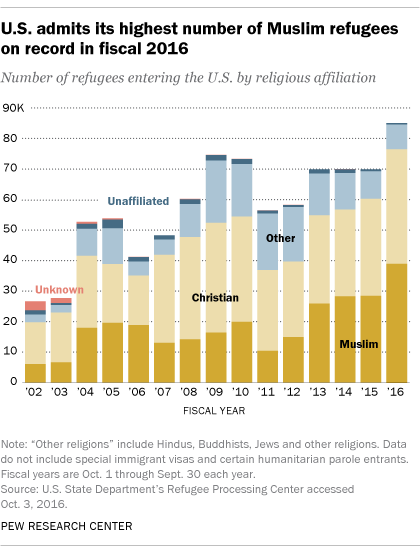 Almost the same number of Christian (37,521) as Muslim refugees were admitted in fiscal 2016, which ended Sept. 30. A slightly lower share of 2016’s refugees were Christian (44%) than Muslim, the first time that has happened since fiscal 2006, when a large number of Somali refugees entered the U.S.

People seeking to enter the U.S. as refugees are processed overseas. As part of the process, they are asked a series of questions, including their religious affiliation. When their applications are approved, refugees travel to the U.S. to be resettled by nonprofit groups associated with the Office of Refugee Resettlement. Refugees to the U.S. are different from asylum seekers, who claim asylum after already being in the U.S. or crossing into the U.S. via an airport or land border.

Refugees make up a small percentage (about one-in-ten) of the roughly 1 million immigrants granted lawful permanent residency in the U.S. each year. Because the U.S. government does not keep track of the religion of new legal immigrants, it is not possible to say what share of all recent immigrants are Muslim. A 2013 Center report, however, estimated that as of 2012, roughly six-in-ten new legal immigrants were Christian, compared with one-in-ten who were Muslim.

In the just-ended fiscal year, about 8,120 refugees (10%) were members of faiths other than Islam or Christianity. More than 3,000 belonged to Buddhist traditions while nearly 2,000 more were Hindu. A much lower number of refugees in 2016 were atheists or claimed no religious affiliation (449 refugees overall, or less than 1% of the year’s refugees). 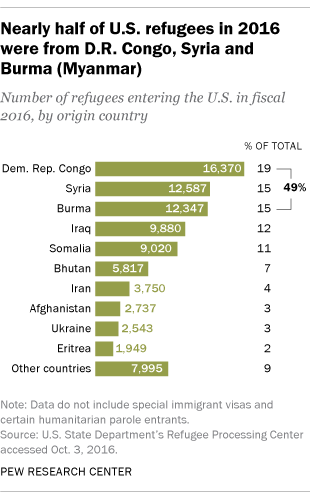 The U.S. received 84,995 refugees in fiscal year 2016, effectively meeting the 85,000 ceiling set by the Obama administration at the beginning of the year. The Democratic Republic of the Congo (16,370), Syria (12,587) and Burma (Myanmar) (12,347) were the top origin countries of refugees in 2016. Together, refugees from these three nations represented nearly half (49%) of all refugees admitted to the U.S. over the past year.

The administration set the goal of resettling 10,000 Syrian refugees in the U.S. in the fiscal year. This goal was exceeded, and refugee status was given to 12,587 Syrians. Nearly all of them (99%) were Muslim and less than 1% were Christian. As a point of comparison, Pew Research Center estimated Syria’s religious composition to be 93% Muslim and 5% Christian in 2010.

The number of refugees admitted to the U.S. has fallen, especially among Muslims
U.S. on track to reach Obama administration’s goal of resettling 110,000 refugees this year
In first months of Trump presidency, Christians account for growing share of U.S. refugee arrivals
Key facts about refugees to the U.S.
Key facts about the world’s refugees