The United Nations is hosting a high-level summit on Sept. 19 to address the issue of refugees and migrants in hopes of coming up with a more coordinated approach to dealing with the large-scale movement of displaced people. The following day, President Barack Obama will host a Leaders’ Summit on Refugees in an effort to find significant new pledges from governments to help manage the crisis.

The topic of refugees is especially pertinent to Europe, where a record 1.3 million migrants, mostly from the war-torn nations of Syria, Afghanistan and Iraq, sought asylum in 2015. To understand public opinion on this issue, here are five charts that help explain European views of refugees based on our spring survey of 10 European countries. 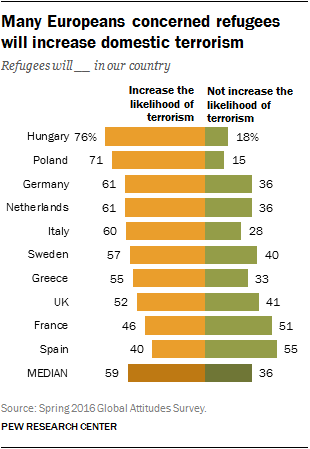 1Many Europeans are concerned that the influx of refugees will increase the likelihood of terrorism and impose a burden on their countries. A median of 59% across 10 EU countries voice concern about the prospect of increased terrorism. This includes 76% who say this in Hungary and 71% in Poland. Around six-in-ten in Germany (61%), the Netherlands (61%) and Italy (60%) also think refugees will increase terrorism in their country. (The survey was conducted prior to terrorist attacks in France and Germany that occurred over the summer.)

Additionally, many Europeans believe refugees are a burden to society because they take jobs and social benefits that would otherwise be available to citizens of each nation. Overall, a median of 50% across the 10 countries surveyed says this. Only in Sweden and Germany do majorities say the opposite – that refugees make their country stronger because of their hard work and talents.

On a more positive note, only a relatively small share of Europeans (a median of 30% across nine countries where this question was asked) say that refugees are more to blame than other groups for crime in their countries.

2The refugee crisis concerns many people across Europe, but the threat assessment varies across the continent. Majorities in Poland, Hungary, Greece and Italy say that a large number of refugees leaving places like Iraq and Syria are a major threat to their countries, compared with only about a third or less of people in Germany and Sweden, both of which have taken in a large number of migrants. 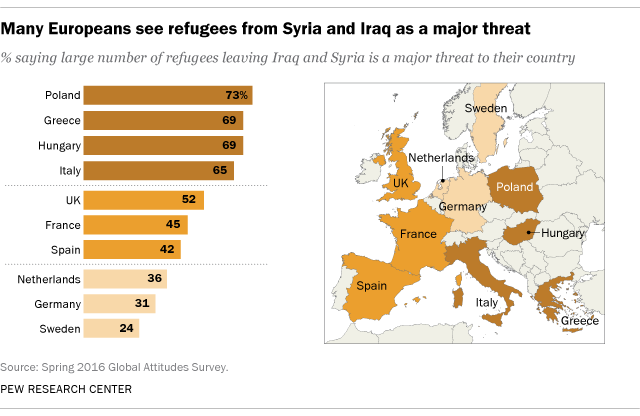 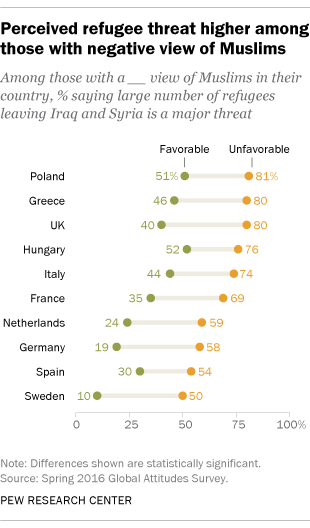 4One possible consequence of generally negative opinions of refugees is that Europeans do not see growing diversity as making their countries better. In no EU country surveyed did more than four-in-ten say that having an increasing number of people from many different races, ethnic groups and nationalities makes their country a better place to live. And in two nations, Greece and Italy, more than half said that increasing diversity makes the country a worse place to live. 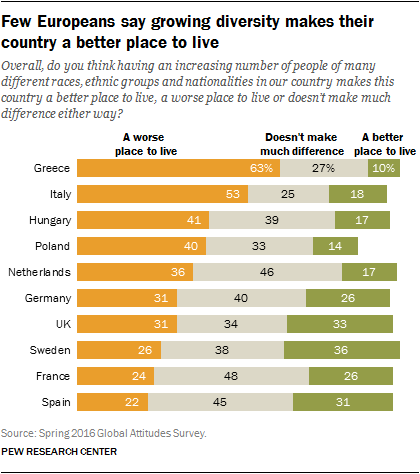 In contrast, 58% of Americans say that growing diversity makes the U.S. a better place to live. 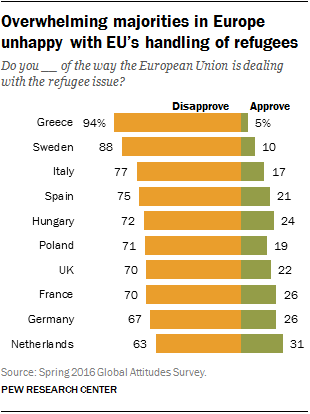 5Regardless of whether they see refugees as a threat, or whether they think they increase terrorism, crime or take jobs, Europeans overwhelmingly believe that the European Union is doing a poor job of handling the refugee crisis. Majorities in every country surveyed say they disapprove of how the EU is handling refugees, including a staggering 94% of Greeks and 88% of Swedes.

Disapproval of the EU’s handling of the refugee crisis is high among all segments of society across Europe. But discontentment is especially high among people with favorable views of the anti-immigrant parties in Britain (UK Independence Party), Germany (Alternative for Germany) and the Netherlands (Party for Freedom).