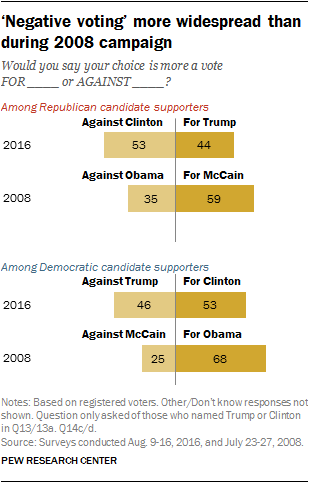 American voters are generally skeptical that either Hillary Clinton or Donald Trump would make a “great” or “good” president. But another dynamic in the 2016 presidential election is the significant share of voters who say their vote is based more on which candidate they are against rather than which one they are for.

This stands in contrast to recent elections in years without an incumbent presidential candidate. In both 2008 and 2000, half or more of each candidate’s supporters said their vote was more a vote for their candidate than a vote against the opposing party’s candidate.

In both the 2008 election between Barack Obama and John McCain and the 2000 election between George W. Bush and Al Gore, clear majorities of each candidate’s supporters said their vote was mainly for their candidates. 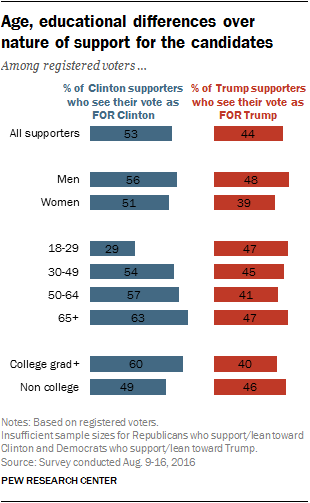 Today, there are differences by age, gender, party identification and education among both Trump and Clinton backers when it comes to whether voters are motivated more by support of their own candidate or dislike of the opponent.

Among Clinton supporters, the pattern is reversed: 60% of those with college degrees view their vote as for Clinton rather than against Trump. A smaller share (49%) of those with less education say this.