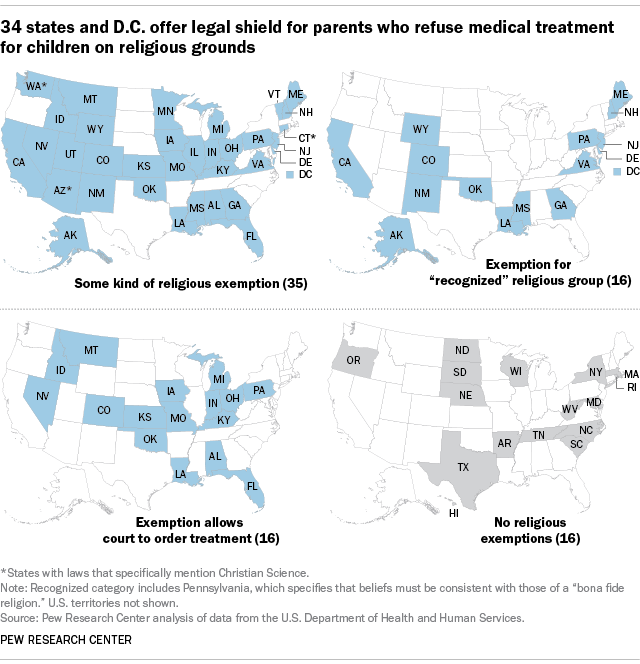 All states have laws prohibiting child abuse and neglect. But in 34 states (as well as the District of Columbia, Guam and Puerto Rico), there are exemptions in the civil child abuse statutes when medical treatment for a child conflicts with the religious beliefs of parents, according to data collected by the U.S. Department of Health and Human Services.

Additionally, some states have religious exemptions to criminal child abuse and neglect statutes, including at least six that have exemptions to manslaughter laws.

These exemptions recently drew renewed attention in Idaho when, in May, a state task force released a report stating that five children there had died unnecessarily in 2013 because their parents, for religious reasons, had refused medical treatment for them. The report has prompted some of Idaho’s legislators to begin pushing for a repeal of state laws that protected the parents of these children from civil and criminal liability when they refuse to seek medical treatment for religious reasons.

Such legal exemptions in Idaho and other states mean, for example, that if a parent withholds medical treatments for an ailing child and instead opts for spiritual treatment through prayer, the child will not to be considered “neglected” under the law, even if he or she dies. These exemptions are meant to accommodate the teachings of some religious groups, such as Christian Scientists and the Idaho-based Followers of Christ. Some of these groups urge and, in the case of Followers of Christ, sometimes mandate the use of faith-based healing practices in lieu of medical science.

In most cases, adults are free to make their own decisions as to how or even if they want to treat an illness. But when the patient is a minor and still legally under the care of parents or guardians, the issue can quickly become fraught with competing claims, from child welfare and medical necessity to parental rights and religious liberty.

Currently, 19 states and territories have no religious exemptions to civil child abuse and neglect statutes. In addition, Nevada and American Samoa have exemptions that do not specifically mention religion, but could apply to religion. For instance, American Samoa’s statute says, “those investigating child abuse must take into account accepted child-rearing practices of the culture in which the child participates.”

In many states religious exemptions are not absolute. Sixteen states and territories that have such exemptions mention that if treatment is given through spiritual means alone it must be in accordance with the practices of a “recognized” religious denomination. (These include Pennsylvania, which specifies that the parent’s beliefs must be consistent with a “bona fide religion.”) Three additional states – Arizona, Connecticut and Washington – have exemptions that specify that children receiving Christian Science treatment from an accredited Christian Science practitioner are not considered neglected.

In addition, 17 of the states and territories that have exemptions specify in their statutes that, in some cases, a court can order treatment for children, regardless of the parent’s religious wishes. Colorado’s law states: “The religious rights of the parent shall not limit the access of a child to medical care in a life-threatening situation.” Florida, similarly, states: “This exception does not preclude a court from ordering medical services or other treatment to be provided when the health of the child so requires.”

Correction: This post has been updated and some wording has been changed. The update includes a correction concerning the state of the law in Tennessee.