The Black Lives Matter movement, which came to national prominence in the wake of the 2014 police shooting of an unarmed black 18-year-old in Ferguson, Missouri, continues to gain attention following other incidents involving the deaths of black Americans during encounters with the police. A recent Pew Research Center survey conducted Feb. 29-May 8, 2016, found that general awareness of Black Lives Matter is widespread among black and white U.S. adults, but attitudes about the movement vary considerably between groups.

Here are some key findings about Americans’ views of the Black Lives Matter movement: 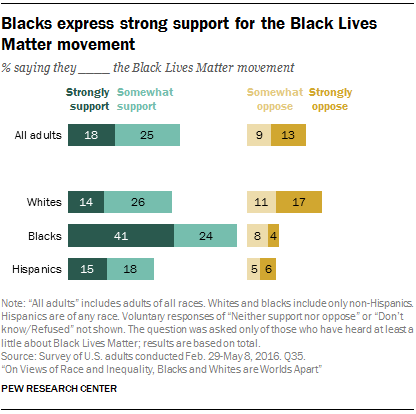 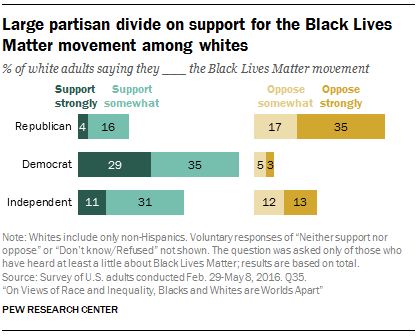 Among whites, Democrats and those younger than 30 are particularly supportive of Black Lives Matter. White Democrats are about as likely as blacks to express at least some support for the Black Lives Matter movement – about two-thirds (64%) do, compared with 42% of white independents and 20% of white Republicans.

Among white adults younger than 30, six-in-ten say they support the Black Lives Matter movement at least somewhat. About half (46%) of whites ages 30 to 49, and even fewer among those ages 50 to 64 (37%) and those 65 and older (26%), express support for the movement. It is worth noting, however, that about three-in-ten whites ages 50 and older (28%) say they haven’t heard anything at all about Black Lives Matter. 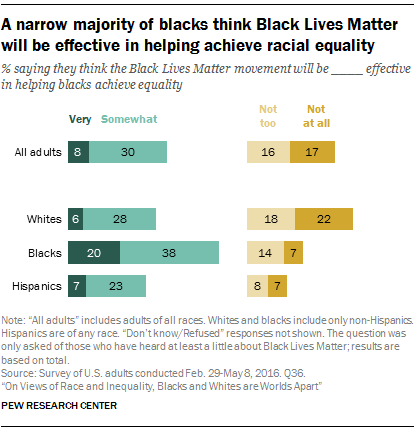