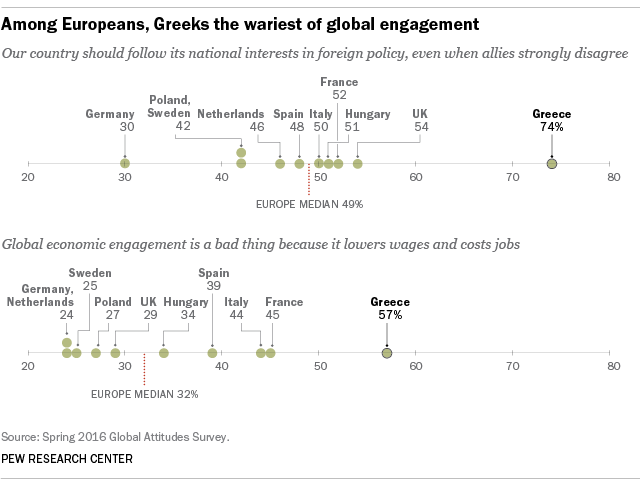 At a time when many Europeans are looking inward after years of economic and political crises, the Greeks stand out as even more focused on their country’s own problems and as the most wary of global economic engagement.

By comparison, a median of 49% among the EU countries surveyed (including Greece) say their country should follow its own national interests first, and a median of just 32% say global economic engagement is a bad thing. 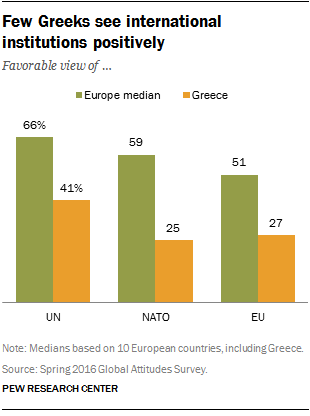 The economic turmoil of the past eight years looms large in Greeks’ assessment of international threats. Most Europeans name the Islamic militant group in Iraq and Syria known as ISIS as the top threat to their country. But fully 95% of Greeks say global economic instability is a major threat, making Greece the only country we surveyed that does not see ISIS as its most severe threat.

Greeks also differ from other Europeans in their evaluation of international institutions. Of the countries surveyed, Greeks have the least favorable views of the United Nations, the EU and the North Atlantic Treaty Organization (NATO). Roughly two-thirds of Europeans have a favorable view of the UN, compared with roughly four-in-ten Greeks (41%). Nearly six-in-ten Europeans (59%) view NATO favorably, compared with just a quarter of Greeks. And on the EU, 51% of Europeans view the institution favorably while only 27% of Greeks agree. 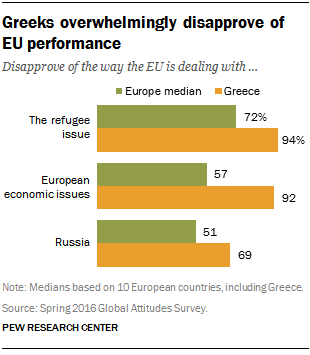