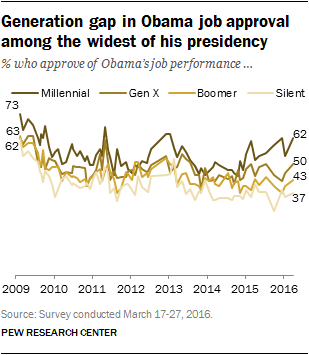 During much of Barack Obama’s presidency, Millennials have been some of his strongest supporters, rating his job performance much more positively than those in older generations. And today — with Obama’s overall approval rating at 51%, the highest in nearly three years – the generation gap in approval is among the widest since he took office in 2009.

There has been a generation gap – the difference between the youngest group, Millennials, and the oldest, Silents – in ratings of Obama for much of the last seven years. But the gap has fluctuated widely over this period. Throughout much of 2014, Obama’s approval ratings among Millennials hovered near 50%, compared with the roughly 35% of Silents who approved of Obama. Over the past year, Obama’s ratings among Millennials have risen, while the ratings of older generations (particularly Boomers and Silents) are little changed. 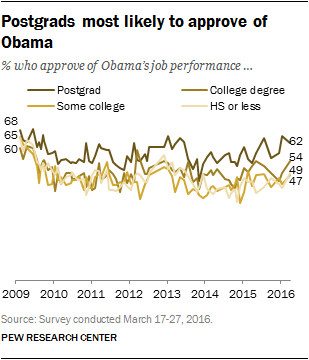 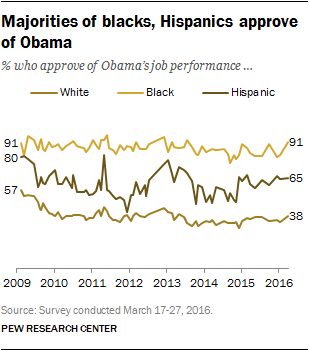 However, whites continue to be more likely to disapprove (56%) than approve (38%) of the president’s performance, as they have been throughout most of his presidency. 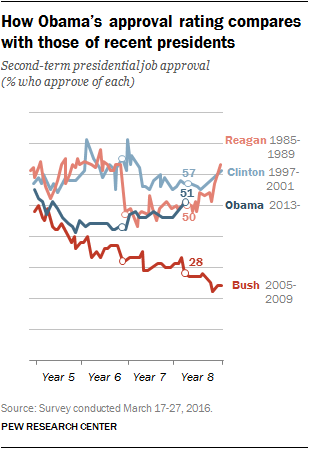 Obama’s overall job approval rating stands at 51%, while 44% disapprove. His current job rating places him just below Bill Clinton’s (57% approved) in March of his final year in office, and is nearly identical to Ronald Reagan’s at a similar point in his presidency (50%). Clinton finished his presidency with an approval rating of 61%, while Reagan rallied in his final year to finish at 63%.

In March 2008, just 28% approved of George W. Bush’s job performance, while 63% disapproved. Bush finished his presidency with an approval rating of 24%. (For more on job ratings of past presidents, see “Presidential job approval ratings from Ike to Obama.”)

Millennials Still Strongest Obama Supporters
Live blog: Generations in the Next America
More than a million Millennials are becoming moms each year
Millennials Endorse Interracial Dating
The Generations and Politics: Who Was Our Best President?