Americans are now more positive about the job opportunities available to them than they have been since the economic meltdown, when views of the job market took a nosedive. Today’s more upbeat views rank among some of the best assessments of the job market in Pew Research Center surveys dating back 15 years. 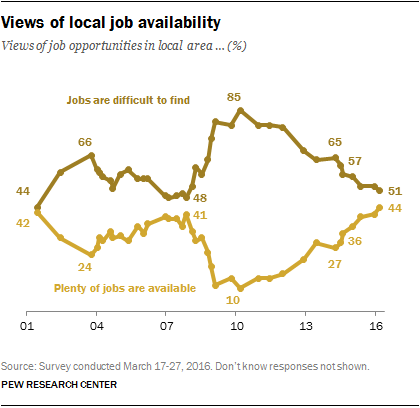 In a new Pew Research Center survey on issues and the state of the 2016 campaign, 44% say there are plenty of jobs available in their community, while slightly more (51%) say jobs are difficult to find. That’s much more optimistic than March 2010 ratings, when evaluations of job availability bottomed out, with 85% saying jobs in their community were difficult to find. Back then, just 10% said there were plenty of jobs available. As recently as last January, the share who said jobs were hard to find outweighed the share who said there were plenty available by a 57%-36% margin.

These findings come as the Bureau of Labor Statistics report for March showed that employers had added 215,000 jobs. The unemployment rate stood at 5%.

The rebound in ratings of the job market puts them back around where they were in November 2007, just before the start of the recession, when 41% said plenty of jobs were available and 48% said they were difficult to find. The only time in the past 15 years when ratings of the job situation were more positive than they are now was in June 2001, when the unemployment rate stood at 4.5%. At that time, about as many said jobs were plentiful in their community (42%) as said they were difficult to find (44%). (Pew Research Center trends do not reach back to the late 1990s, a period of economic expansion and wage growth.)

While partisans offer significantly different views of national economic conditions, there is hardly any difference in views of local job availability: 49% of Republicans and 45% of Democrats say there are plenty of jobs available in their community.