It could be a sign of the times – or something more lasting – but far more Americans today feel like their side is losing more often than winning in politics. 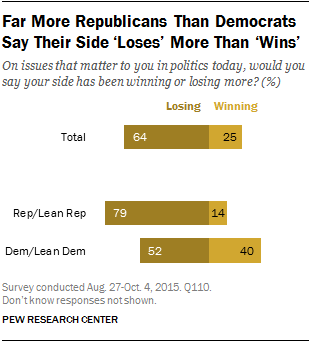 The feeling that political losses outnumber victories is widely shared across demographic groups. Substantial majorities of men (66%) and women (62%) feel like their side loses more than it wins. And there are only modest differences when it comes to race and ethnicity: 66% of whites, 65% of blacks and 59% of Hispanics all say their political side loses more often than it wins.

Yet there are clear partisan differences – fully 79% of Republicans and Republican-leaning independents say their side loses more often than it wins, compared with 52% of Democrats and Democratic leaners.

However, while Republicans generally feel like their side is “losing,” most Democrats do not feel like political “winners.” 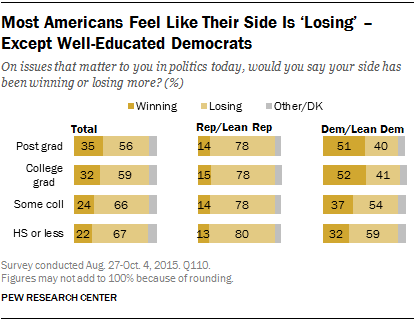 Among the only groups who feel like they’re winning are well-educated Democrats. Those with at least a college degree are more likely to say they feel like their side is winning (51%) than say it’s losing (41%). 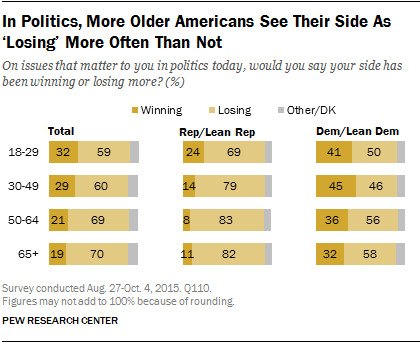 In general, younger people are more likely than older people to feel their side is winning: About a third of those under 50 (30%) say their side wins more than it loses compared with 20% of those 50 and older.

Older Republicans are more likely than younger Republicans to see their side as losing in politics today. Still, a majority of Republicans under 30 (69%) do hold this view, and they are much more likely to say this than their Democratic counterparts. Just half of young Democrats say this. 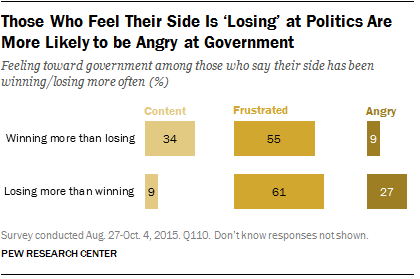 What we found – perhaps not surprisingly – is that, in general, feelings of political “losing” are associated with higher levels of anger toward government. Among those who say their side loses more than it wins politically, 27% are angry at the federal government – three times the percentage among those who feel like their side wins more frequently (9%).